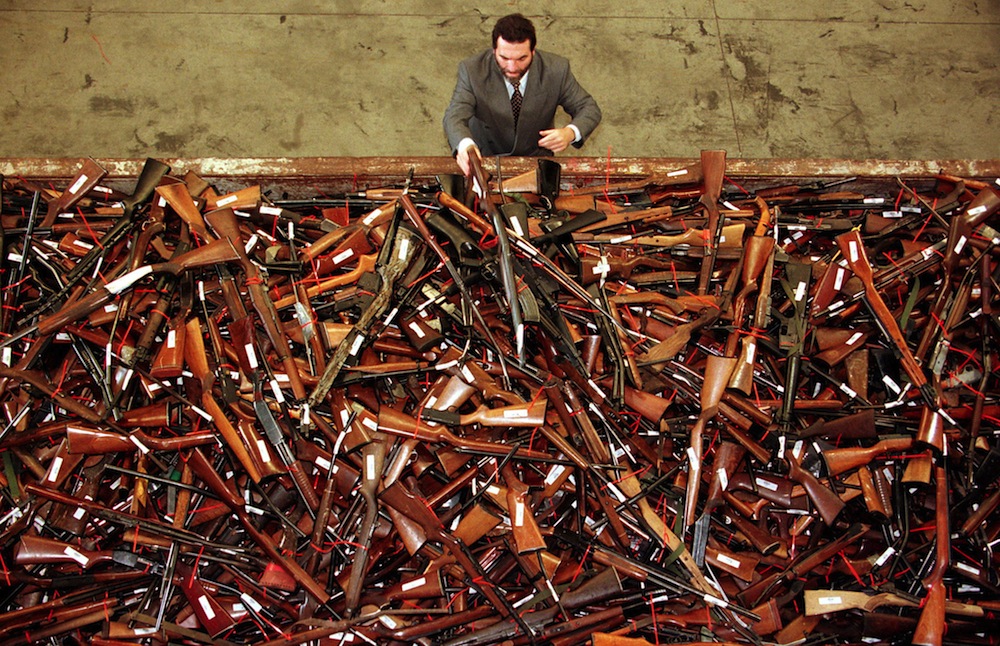 Sometimes a tragedy is so awful that it changes the national debate. The 1996 Dunblane school shooting in Scotland, 2001 terrorist attacks in the United States, and the 2011 Norwegian gun massacre all prompted an outpouring of anguish and a demand for changes in law.

In Australia, that moment was the 1996 Port Arthur massacre, in which a gunman killed 35 people at a tourist attraction in Tasmania. To put the size of the death toll in perspective, the United States population is 14 times larger than Australia, so the impact of the Port Arthur massacre on Australia would be like a U.S. shooting that cost more than 400 lives.

As the U.S. reels over yet another mass shooting—this one involving a man who killed six students at UC Santa Barbara and shot himself—it’s worth taking a look at what happened in my country after that mass shooting—and at what has happened since.

As a nation that won its independence from Britain by consent rather than revolution, Australia’s Constitution does not contain a right to bear arms. But firearms are a part of rural life (used, for example, to cull kangaroos). Our police officers carry a firearm when they’re on patrol. Shooting ranges are common.

That’s the backdrop for the Port Arthur massacre, which took place at a critical time. The previous month, a conservative government had been elected. After the shooting, the new prime minister, John Howard, immediately came under pressure from elements of his party to leave gun laws unchanged.

But he didn’t. Supported by Tim Fisher, leader of the rural-based National Party (with which Howard’s party was in coalition), Howard tightened laws around access to firearms, particularly rifles and shotguns. The government also announced a buyback that would compensate owners for their weapons at market prices. More than 650,000 guns were handed in, making it the largest destruction of civilian firearms in the decade before or afterward.

The effect of the buyback was to reduce Australia’s firearms stock by around one-fifth, equivalent to the U.S. reducing its national stock by 40 million guns. And while some weapons came from households with multiple firearms, survey evidence suggests that the buyback nearly halved the share of Australian households with one or more firearms.

From 2008 to 2010, while working as an economics professor at the Australian National University, I teamed up with Wilfrid Laurier University’s Christine Neill to study how the Australian gun buyback affected the firearms homicide and suicide rates. We published two peer-reviewed journal articles on the buyback, one looking at the trends over time and another studying variation across states and territories.

Whichever way you cut the data, it seemed clear that the national gun buyback reduced gun deaths. In the decade prior to the buyback, there was an average of one mass shooting (five or more victims) every year. In the decade after the buyback, there were no mass shootings. Overall, the firearms homicide and firearms suicide rates had been trending steadily downwards through the 1980s and early 1990s, but the fall accelerated after the buyback.

The strongest evidence in favor of the Australian gun buyback came when Neill and I compared statistics across the eight Australian states and territories. In some jurisdictions, the buyback had only a small impact on the firearms ownership rate, while in other places, it had a huge effect. Analyzing these variations between states, we again found the same result: In states where more firearms were bought back, there was a bigger drop in gun deaths. Put simply, fewer guns meant fewer gun deaths. We looked for displacement effects (Did non-firearms deaths rise?), and found little evidence. Our published papers concluded that the Australian gun buyback saves around 200 lives per year.

Although the policy was aimed at reducing gun homicides, we found that its effect was mostly to reduce the gun suicide rate, with most of the 200 lives saved being averted suicides. This makes sense once you realize that the ratio of firearms suicides to homicides is around 4-to-1 (in the U.S., the ratio is 2-to-1). Put another way, the person most likely to kill you with a gun is yourself.

In the decade and a half since the Australian gun buyback, the number of firearms per person has stayed constant, and gun deaths have remained thankfully low. For the purpose of making choices about public health interventions, economists have a concept known as the value of a “statistical life.” In Australia, if an intervention can save a life for $3.5 million, it is considered good value. Using this approach, the gun buyback appears to be a great investment for the community. The annual social benefit of the buyback is larger than its one-time cost.

What can the U.S. learn from the Australian gun buyback? When I studied the effect of the policy, I was a professor. Since then, I have entered federal politics, representing the Australian Labor Party. So one lesson is to recognize courage when you see it in your political opponents. Howard and Fisher did not have tightening gun laws on their agenda before they were elected, and they could have squibbed the chance to change Australia’s gun laws. But they didn’t. Both believed that gun laws needed to change, so they set about building a political movement for reform. They probably paid a political price at the 1998 election, which saw the Labor Party win a majority of the popular vote, but (like Al Gore in 2000), fall short of victory.

Another lesson is the value of a bold package of reforms in changing culture. When U.S. researchers have studied the impact of U.S. gun buybacks on crime, they typically find no effect. Most likely, it’s because these buybacks are conducted at the city level, and are not accompanied by a general tightening in ownership laws. By contrast, the Australian law change was implemented nationally, accompanied by a massive publicity campaign. It caused parents to reassess whether the .22 rifle in the closet was really necessary, or whether it was more likely to become a risky plaything for teenagers.

In my parliamentary district, I sometimes visit the rifle range used by the Canberra Rifle Club, which is more than a century old. Speaking with locals who use the range, I wouldn’t pretend that every recreational shooter is as proud of Australia’s gun buyback as I am—but most see firm gun laws as supporting the ability of law-abiding shooters to enjoy their sports. This was the philosophy adopted by America’s National Rifle Association in the 1960s, when it backed a crackdown on cheap handguns (“Saturday night specials”) because, as the NRA said at the time, these guns had “no sporting purpose.”

Yet since 1977, when Harlan Carter and Wayne LaPierre took over the organisation, the NRA has taken progressively more hardline positions: opposing bans on armor-piercing bullets, describing federal agents as “jack-booted thugs,” and insisting on going ahead with an NRA conference in Colorado just weeks after the Columbine killings. Australia’s gun lobbies have never been as well resourced, connected, or politically extreme as the NRA.

Today, there are more guns than people in the United States, while Australia has one gun for every seven people. So it should come as no surprise that more than one in 10,000 Americans will be killed by a gun this year, compared with fewer than one in 100,000 Australians.

Much as we’d like to believe the Dirty Harry fantasy that guns are used to defend goodies from baddies, the world doesn’t work like that. Gun deaths are more likely to occur when a depressed teen finds dad’s gun, when an angry spouse turns a rifle on their cheating partner, or when a young boy opens the bedside drawer and starts playing with the a loaded pistol inside. That’s why the most careful U.S. studies point to the conclusion: more guns, more crime.

Having lived in the United States for four years (from 2000 to 2004), I don’t believe that Americans have any greater tendency toward violence than Australians. And yet compared with Australia, the U.S. has a slightly higher suicide rate, and a homicide rate that is over five times higher. The difference is guns. The question is whether it will be possible to build a U.S. political coalition that can transform the laws and reduce the death rate.