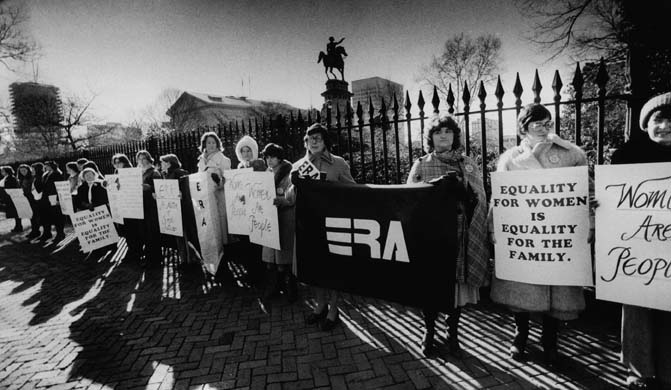 Imagine an America where women had the right to vote but could be rejected for a job because of their gender. Imagine an America where women were refused admission to colleges and technical schools and denied access to credit cards. Imagine wanting to buy a house and being turned down for a mortgage because you’re a woman. Imagine being a teacher and bring fired for being pregnant.

This is what America was like before the women’s liberation movement of the 1960s and 1970s. The women’s liberation movement changed women’s lives socially, economically, and politically. It was described as “the revolution that will affect everybody” on the September 4, 1970, cover of Life magazine. And it did. So why do I always get the same question from younger audience members at screenings of my independent documentary, Feminist: Stories from Women’s Liberation: “Why didn’t I know about this?”

The first time I got the question was in a letter from a first-year college student who had watched the film in her classroom. The information in the film was new to her, and she wrote that it made her angry that she didn’t know this history.

I began making my film, Feminist, in 2004 as a straightforward documentary about historical facts, but I learned so much that I finished the film a different person. My feminism strengthened to the point where I can easily talk with people who reject the term feminism because the facts of the movement are within reach for me, and I can share the reasons why feminism changed our country for the better. I understand now that not remembering this movement preserves a male view of American history that values male leaders of history over female ones.

Ten years ago, a co-worker at my film-editing job at Technicolor whispered to me: “Are you a feminist?” She was putting distance between herself and the word—something I had observed other women do over the decades. I reached into my memory for images and quotes to help explain why I was a feminist, and I couldn’t grasp any.

I knew I had positive feelings toward feminism. My family had discussions about women’s movements at the dinner table. When I was a teenager in the 1970s, I lived in Little Five Points in Atlanta, the area where the political activists, gay women and men, filmmakers, theater people, and feminists lived, and I was immersed in the counterculture of that time. I even volunteered at the feminist bookstore Charis Books and More.

At the time I had the discussion with my co-worker, there were no documentary films about the entirety of the women’s movement, so I decided to make my own. (Many years after I started the project, PBS, in partnership with AOL, aired a series on the women’s liberation movement in 2013.) My film is an independent film born out of a need to tell a story that hadn’t been told. My budget was 90 percent financed by me.

One of the things I realized in making this film was that the movement does not figure prominently in history textbooks. My daughter’s fourth-grade textbook, History-Social Science, California Studies (Houghton Mifflin) includes a six-page chapter, “A Call for Equality,” that covers the years 1960 to 1975. There is a discussion of Martin Luther King, Jr., the Civil Rights Act, and Cesar Chavez. Dolores Huerta, who co-founded the United Farm Workers, is only mentioned briefly. There is just one sentence about the women’s liberation movement: “Women also spoke out against unequal treatment in the 1960s.” The message to students: You don’t need to remember these women.

That message is also conveyed in our public memorials, where we don’t honor the women of the women’s movement. Only nine of the 100 statues in National Statuary Hall in the U.S. Capitol building are of women. Not one of them is a woman from the women’s liberation movement. I have never seen a park or an elementary school named for a feminist from that time. Moreover, there is not even one federal holiday in the United States named for a woman.

When I started the film, I figured we don’t celebrate the women’s movement as we do other social movements because it was too complex—encompassing issues of class, religion, race, and language, among others. The feminists of the 1960s and ’70s also prided themselves on not having leaders: Every woman had a voice in the movement. I thought it might be hard to pull out individual successes to honor. But I was wrong: As I worked on the film, I discovered many concrete successes—including ones that weren’t included in textbooks or honored in public memorials.

Then there’s Betty Friedan’s 1963 book The Feminine Mystique, which gave a name to the discontent of middle-class housewives and the rigid social roles they were pressured to fulfill. She and others went on to create the National Organization for Women (NOW) in 1966, which differed from other women’s organizations of the time because it took political positions.

I learned about other heroes of the movement, like Aileen Hernandez, the first female commissioner for the Equal Employment Opportunity Commission. Her relentless work to include gender discrimination in Title VII of the Civil Rights Act led to the founding of NOW. She was joined in that contentious fight by Pauli Murray, whose insight and actions helped to propel the women’s movement forward. Murray also helped write NOW’s mission statement.

My film also explores an important day in women’s history: August 26. In 1920, it was the day that women’s right to vote became law, and, in 1970, NOW organized the Women’s Strike for Equality on August 26. Many worried about a low turnout, yet there were 50,000 people in attendance. In 1971, a joint resolution requested by Congresswoman Bella Abzug made August 26 “Women’s Equality Day”—a commemorative day, not a federal holiday.

The feminists of the women’s liberation movement—who considered themselves second-wave feminists following in the footsteps of the suffragists—saw that women’s history was a necessary part of their movement.

When they marched in 1968 to protest the Miss America Pageant, they held posters with images of 19th-century suffragists, like Susan B. Anthony and Sojourner Truth that read: “Our Heroines.” The stories of these early feminists were minimal in textbooks of the time, even though suffragists were very disruptive—they were arrested, jailed, and force-fed when they went on hunger strikes. When I interviewed feminist Sheila Tobias for my film, she told me: “One of the great travesties of growing up in the ’50s was not knowing about women’s history except for a brief moment in time in which there was suffrage.”

By the 1970s, feminists were trying to correct the historical record to include women’s history. They began women’s studies programs in universities and instituted Women’s History Month in March.

It’s important to note that the feminists made up the women’s liberation movement as they went along—there was no guidebook. No one had protested these ideas before—including the fact that a recorded history that focuses on men alone helps to maintain an unequal society.

And now we have problems with our cultural memory of the women’s liberation movement. I think our failure to honor the movement is rooted in our conflicted feelings about women as major players in American history.

The way we remember the Miss America Pageant protest in 1968 in Atlantic City, New Jersey is a good example. There is no statue on the Atlantic City Boardwalk to commemorate an important protest about standards of beauty for women and a contest tied into capitalism, war, and race. Instead, our cultural touchstone from that day is the negative and trite association of feminists as “bra-burners.”

Bras were just one of the items protestors were encouraged to bring that day that signified how the male-dominated culture was keeping women locked into rigid ideas of beauty, but they weren’t burned. Starting a fire on the boardwalk was illegal, so protestors opted to throw Playboy magazines and other items in a “freedom trash can.” Still, the bra-burning image remained—a symbol that was easy to belittle as women focusing on something trivial. Misinformation and myths sometimes serve as placeholders in our memory when facts are not remembered.

I consider myself a person who actively fights for women’s reproductive rights, and many would expect that my partisan walls would harden after making the film, but they actually softened. I was surprised to find out there were many conservative women who were feminists during the women’s movement: One of the artifacts I collected during the making of my film is a badge that reads: “GOP for ERA” (the controversial Equal Rights Amendment). I now listen to women who have different political opinions than I do about very controversial topics such as reproductive rights.

Recently, two conservative women who are actively anti-abortion—whom I might have gotten into pointed arguments with in other circumstances—came to a screening of my film. At the end of the film, I asked who would consider themselves feminists. One raised her hand. The other pinned on the button I gave audience members that read, “Proud to be a Feminist.”