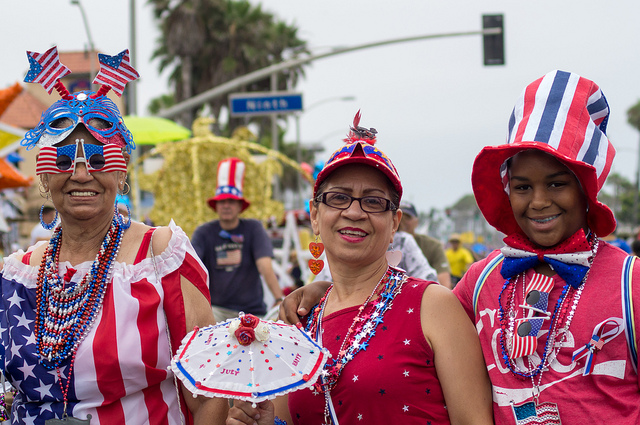 The Fourth of July is a cherished celebration across our country. But in the Orange County city of Huntington Beach, it’s even more important. The holiday helped make the town what it is today.

No Independence Day was more important than July 4, 1904, when the city held its very first Fourth of July parade. That day saw the arrival of the city’s very first electric passenger train. About 50,000 people were on hand for the event—far more than the population at the time. The train literally opened up Huntington Beach to the rest of Southern California, establishing a crucial link to the neighboring cities of Long Beach and Los Angeles.

This was also the moment that gave Huntington Beach its name. Originally called Pacific City, the area was rechristened in honor of Henry Huntington, who owned the trains. He deserved the honor. Huntington knew that a railway to Huntington Beach would not have enough riders to be consistently profitable, but he built one anyway, on the theory that those people who did take the ride would purchase property that he and others owned in the area. A visit to today’s Huntington Beach is all the evidence you need to know that Huntington was right.

In the 110 years since the railway’s arrival, Huntington Beach has acknowledged this anniversary by building up its Fourth of July parade into an essential Orange County tradition. Since the beginning, the parade has mixed the customs of small-town parades—tug-of-wars, beauty contests, airshows, eating contests, horse races—with more spectacular attractions. One unforgettable such special offering, in the 1930s, featured Fire Chief Bud Higgins, who wore a fire suit, slathered his face with petroleum jelly, covered his entire torso with alcohol and then lit himself on fire—all before diving from a 50-foot platform above the pier into the ocean. Talk about a showstopper.

For a half century, the train powered Huntington Beach year-round. In the 1940s, Los Angeles had more than 900 Red Cars that traveled over 1,100 miles throughout the Southland. In Huntington Beach, there was a big depot located right at Pacific Coast Highway and Main Street. Three lines came to Huntington Beach—the La Bolsa Line, the Santa/Huntington Beach line, and a line that connected to Seal Beach and Newport Beach—and the stops defined neighborhoods.

But by the early 1950s, the car took over Southern California, and the depot was little used. Later, it was torn down. The last Red Cars in L.A. stopped running in 1961.

Today in Huntington Beach, you’ll find remnants of train tracks on the beach, as well as a stretch of “right of ways” (the actual paths that the trains ran on) for the La Bolsa Line. The tracks may be gone, but narrow grass medians mark where the trains once creaked along from First Street and PCH all the way to Ellis Avenue between Gothard and Huntington. To feel what Huntington Beach once was, you can go to the Red Car Museum in Seal Beach or ride an old Red Car in San Pedro, where there’s a 1.5-mile vintage trolley line.

Of course, the best way to understand Huntington Beach, and connect to its history, is to drop by on Independence Day. The trains may be gone, but the parade goes on. Huntington Beach now boasts the longest-running July Fourth parade west of the Mississippi.