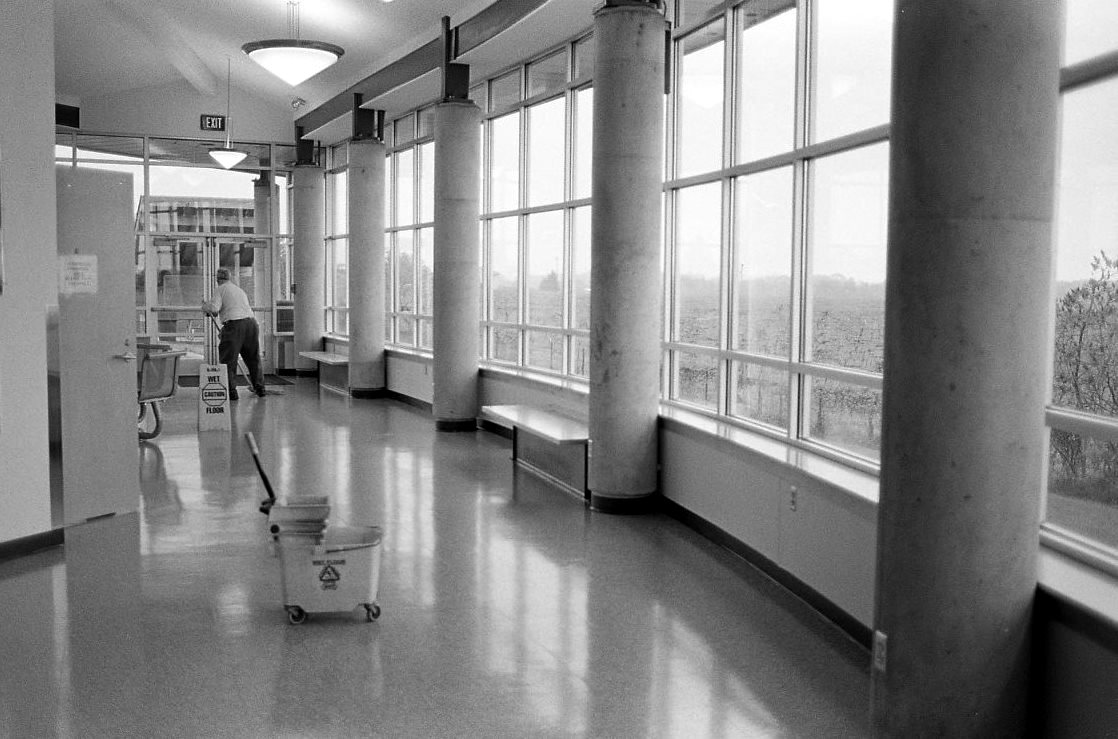 Monday through Friday, my full-time job is cleaning restrooms at Van Nuys High School. But that work is not the hardest part of my life. The hardest part is saying goodbye to my 4-year-old son when he asks me not to go to work again. In order to make ends meet, I also work weekends and nights.

I know I’m lucky to have a full-time job as a facility attendant in the Los Angeles Unified School District. I’ve done that for 10 years, and some days are better than others, but I like the work, and my co-workers are a supportive second family. We don’t interact much with students, but those of us who do custodial work are eyes and ears for teachers and administrators. If I see a student needs help of any kind, I take pride in letting the right people know.

The one thing that hasn’t been good about the job is the pay. When I started 10 years ago, I made $8.65 per hour; now I make $9.85 per hour. But I just learned that’s going to change. SEIU Local 99, the union that represents me and more than 30,000 other LAUSD school workers, just negotiated a new contract that will raise my pay to $15 per hour by 2016. This is a big deal for the 20,000 of us who make LAUSD’s lowest wages and are covered by the raises. It might be an even bigger deal around the rest of the U.S., since $15 per hour is the goal of a movement in cities around the country to improve the lives of working people.

I’m not exactly sure how my life will be at $15 per hour. I’ve never made that much money, and I’ve been doing custodial work since I was 15. I started out while I was still going to school myself, as a part-time custodian at St. Nicholas, a parochial school in the San Fernando Valley. Back then, in 1997, I was making $7.25 an hour. After I graduated from San Fernando High School, the parochial school offered me a permanent position, and I worked there for four years, eventually making $8.50 per hour.

About a decade ago, a neighbor of mine in Pacoima, who works as a plant manager for LAUSD, told me the district was hiring and gave me an address and phone number for inquiries. I applied and was interviewed by three schools. San Fernando High offered me a job, but I worried that with so many friends and family in and around that school, I might get into trouble. (I’d been a bit of a troublemaker in high school there.) Instead I took an offer from Van Nuys High, and I haven’t regretted it.

My job is what’s called a “restricted” position—the California education code’s name for specially funded positions that can employ only people who meet certain conditions (they’re from impoverished areas or have disabilities, for example). Restricted workers have a set wage rate, which means I haven’t been able to ask for a raise, and I can’t earn overtime.

As every Angeleno knows, working 40 hours per week for less than $10 per hour is not enough to live on here. My main extra gig is working in the ballroom of St. Nicholas Greek Orthodox Church, which is rented out for parties. When things are busy there, I work from 9 a.m. Saturday to 4:30 a.m. Sunday. I also have my own catering business on the side, mostly providing tacos for parties; my dad and I prepare everything ourselves. And I pick up hours at the parochial school whenever they have work for me to do.

To be honest, I have no idea where my extended family would be without St. Nicholas; they’ve given work to so many of my relatives, including my parents, that I can say we wouldn’t have survived without their support. We’ve also had to make sacrifices for one another. In 2009, when my parents were having financial troubles, my brother and I moved back into their home in Pacoima and started contributing to the mortgage so they wouldn’t lose the place.

We’re still here. My brother lives in a little guesthouse out back. My parents occupy the second floor. My fiancée (who used to be a dental assistant and is now going to school), my son, and I live on the first floor.

I feel fortunate for what I have. I also feel tired a lot, from all the work and from lack of sleep; sometimes I get as little as two hours a night. But what I miss most is time with my son. He’s always asking, “Daddy, where are you going?” Leaving breaks my heart every time.

I’d love to save enough money so that the three of us could get our own place, maybe in nice places like Fillmore or Northridge, which aren’t too far from Pacoima. But when I think about making $15 an hour, I think mostly of the time that money could buy with my son.

He’s going to start preschool in August—we’ve enrolled him in a public school pre-K, though the priest at St. Nicholas is lobbying us to send him there. I know that one of the best things about this raise is that so many of my fellow LAUSD school workers have kids in LAUSD schools. So a raise like this won’t just give LAUSD workers more—it will give LAUSD happier parents.