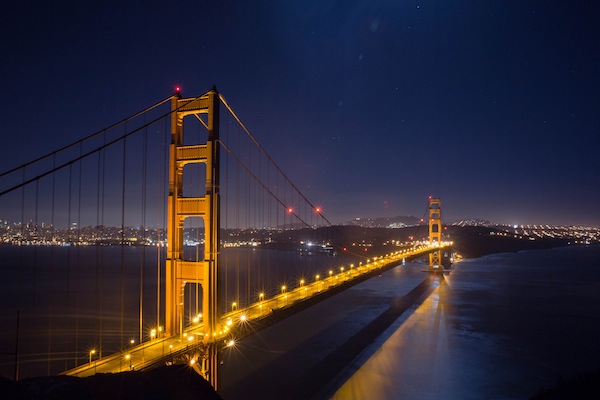 Minutes after my plane landed in San Francisco, I took out my phone and texted my friend Andres: “Let’s try the bridge tonight.”

I was back in the Bay Area for Easter from Orange County, where I go to school. Within an hour of arriving and barely spending any time with my family, I had already stuck the keys in the ignition and backed out of the driveway. Andres and I were going to attempt to climb one of the towers of the most iconic San Francisco monuments: the Golden Gate Bridge.

Most of my time is spent living the mundanely routine life of a college student stuck in one of America’s safest cities—attending class, avoiding trouble, contemplating what to do besides going out to eat or socializing. The humdrum suburbia known as Irvine inspires a frequent desire to search for adventure.

So I seek out abandoned buildings, sewers, and ruins to explore or historical landmarks and other man-made structures to climb—an activity known as urban exploring (Urbex, for short). This is all in hopes of getting “the shot”: a unique view only seen from the depths of the underground, from extreme heights, places usually void of human presence. There’s no fun in taking photos in a world where practically every corner has already been discovered. But there’s the thrill of exploring areas where “No Trespassing” signs are ubiquitous. The only problem, of course, is getting caught. 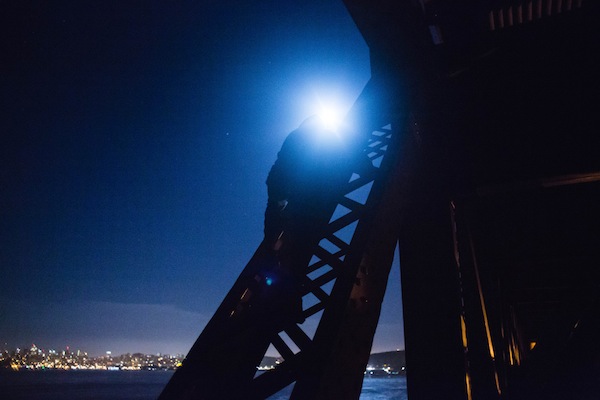 I first became interested in urban exploring after coming across Andrew Wonder’s documentary film Undercity, which tracks the adventures of Steve Duncan under New York City, one late night my senior year in high school. My laptop screen illuminated with images of the hidden City Hall subway station, the sewer tunnel beneath Canal Street, the underground Lincoln Tunnel network, and the view from the top of the Williamsburg Bridge. These abandoned urban environments were either neglected or restricted—behind iron gates, locked doors, manhole covers, surveillance cameras, and motion sensors.

The philosophy of urban exploring is: “take nothing but photographs, leave nothing but footprints, kill nothing but time.” These adventures reveal a beautiful grandeur hidden from view and unlock an appreciation for the locations’ complex history most people don’t know about. Though trespassing is against the law, we like to believe what we do is a victimless crime. We leave everything as found, with barely a trace of our presence, and keep specific locations secret to prevent any vandalism.

Finding places to explore is easy with the unlimited resources of the Internet. You have plenty of websites and blogs dedicated to urban exploring. Almost anywhere, you can meet up with strangers to explore hidden parts of a city.

Urban exploring sites are filled with brags about metropolises, such as New York, London, Paris, Dubai, Hong Kong, and Berlin. But rarely did I see San Francisco mentioned. Climbing the Golden Gate Bridge seemed to be the right place to begin.

Andres and I had made our first attempt to climb the bridge last year. The only preparation we conducted was visiting the bridge once during the day, and pinpointing the exact locations of security cameras and motion detectors on the bridge’s sidewalks in order to avoid them.

By getting around fences on the Marin County side, we were able to climb along the underside of the bridge deck. Unfortunately, as we got close to the surface of the bridge deck, we heard the sounds of voices shouting over the sound of drill heads hitting concrete. We had to turn back.

This night would be our second attempt. We brought gloves to grip onto ledges, cables, and the edges of gussets (the steel inserts between the cross-sections of the steel framework). They also protected our hands from rusted metal, barbed wires, and construction debris. We dressed in black to be inconspicuous.

We almost backed out as we scouted the bridge from the Presidio side. The night was uncommonly clear—as I looked up into the clear, fogless sky, I knew the moon was brilliant enough to spotlight two shadows illicitly climbing the bridge’s infrastructure. Where was San Francisco’s infamous fog when we needed it?

We drove over the bridge as a way to embed the will to climb in our bodies. Passing through the unmanned tollbooth, the first tower grew as we approached it. I drove slow, noticing the shape of a police car enter my rearview mirror. We were reminded how closely law enforcement could be watching. 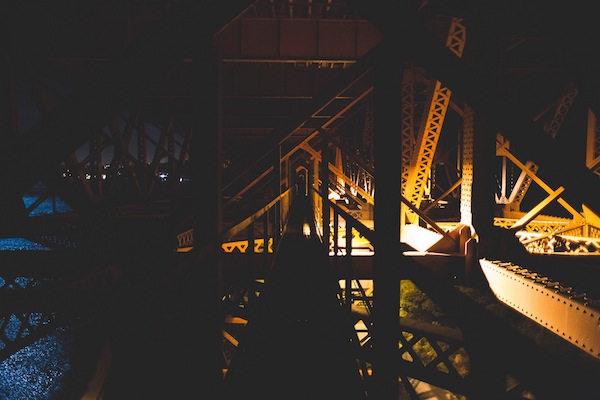 We parked at a vista point in Marin at roughly 1 a.m. and agreed 30 minutes should be enough to reach the top of one of the bridge’s towers. We got around a 6-foot-high barbed wire fence by scaling an unstable plastic pipe attached to a nearby wall.

Andres found a crevice small enough for an average human to crawl through on his stomach. Peeking in, we found a labyrinth-like walkway at least three stories high, suspended from the bottom of the bridge and leading in a variety of directions. As we climbed down, we passed hundreds of cables, each as thick as my fist, fastened to a giant block of cement. We realized we were inside the infrastructure housing two of the four cable anchorages of the Golden Gate Bridge. We were standing right in front of the place where one of the main cables that suspends the bridge’s weight was securely tethered to the ground.

We scooted along a ledge barely a foot wide and climbed up an angled plate girder attached to the end of the platform, using nothing but the rivets for leverage and our upper body strength. At a maintenance platform right under the start of one of the bridge’s main cables, we were now about 200 feet above the water.

From there, I looked out over San Francisco Bay and saw the familiar outlines of the Bay Bridge, downtown San Francisco, and Coit Tower engrossed by flickering lights. The water reflected the intense brilliance of the moon. It was an inimitable view, unrestricted by guardrails. I could not help but feel that I discovered something miraculously wonderful. Then I photographed the scene knowing I would only be able to capture just a fragment of its elegance.

By the time I was satisfied with the pictures I’d taken, it was 2 a.m. The empty car in the viewpoint parking lot would surely spark some suspicion. We were tempted to continue because we were standing right at the start of one of the bridge’s main cables that led up to the top of a 500-foot Art Deco tower. We could have tightrope-walked right up. But it was getting late. The last thing we wanted was to increase the chances of getting caught.

The way back was faster than the journey in. The fear of getting caught overcame any fear of heights. We found our way to the anchorage’s labyrinthine stairs in the dark, with the aid of our cell phone lights. The knurled patterns on each ladder rung hurriedly climbed made impressions on my gloves.

We had made our way out of the anchorage—the home stretch—when we heard a whistle. Then, “Hey!” Then another call, closer and louder: “Hey!” We didn’t know who it was or where the voice was coming from.

We were out of breath, but we ran toward the parking lot. Andres jumped over the fence easily, but I was so exhausted, all I could muster was lifting my torso above the fence. I told Andres, “I can’t make it.” He pulled the rest of me over and in the process, ripped my pants. I fell to the ground feeling dirt enter my shoes and cold air hitting my leg. Andres was steaming with sweat and covered in dirt, cobwebs, and stains from the bridge’s characteristic international orange paint. I could only assume the same for myself. We were in the clear, but we surely did not look like we were tourists admiring the view from the lookout.

It was a relief to reach the parking lot and see the car still there, not surrounded by Bridge Patrol. Andres and I nonchalantly made our way over to the car trying to catch our breath, wiping dust from our clothes. We entered the car and couldn’t help but think how much closer we were to climbing a tower this time. I had plenty of pictures to upload on my blog to prove it. And we agreed: There is always a next time.

While climbing part of the Golden Gate Bridge isn’t the same as scaling Mt. Everest, it was a chance to explore for exploring’s sake. It was a chase that proved I existed outside of the routines of daily life. It made me realize I like living by interesting vices, not boring virtues.