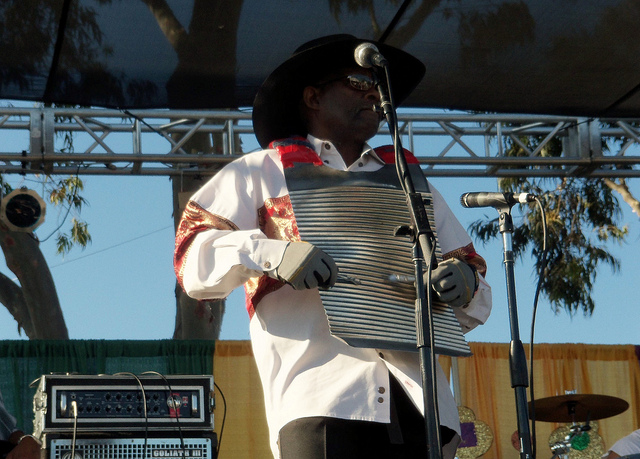 It’s not every day that Angelenos stumble upon a washboard, an accordion, and a pot of gumbo all within the county limits.

Zydeco is a Louisiana Creole jazz music style with a matching eccentric dance that’s a little too swinging to be called folk and a little too folky to be called swing. Following the quick rhythm and bold chords of the music, dancing zydeco requires a blithe and loose spirit. Though the combination of a trumpet, accordion, washboard, drum set, and violin could assault the ears, those instruments, when put together right, are the perfect accompaniment to hopping and twirling your partner around the dance floor.

Growing up in Chicago, I took piano lessons, played violin in my high school orchestra, and attended the occasional street festival. But like most city kids north of the Mason-Dixon line, my knowledge of the Gulf Coast and its music was limited. All of that changed during a memorable spring break in New Orleans this past March.

I spent an evening at “Rock and Bowl,” a combination bowling alley-dance floor featuring a local zydeco band. The feeling was electric. Energy radiated from every corner of the room as at least 50 couples crowded on the floor, jumping and jiving in partnership with the musicians.

It was a blast, but I had little reason to believe that zydeco would follow me back to Los Angeles, where I attend college. Missing New Orleans, however, I did a late-night Google search and learned about the zydeco event at the Best Western Golden Sails in Long Beach.

I lured my friend Frank into joining me one Sunday with half-baked promises of fully-baked gumbo—hoping that I had not been deceived by blog posts alleging to the presence of this Louisiana staple. Thanks to a misdirected turn on the 405 by my travel guru Siri, we arrived almost an hour late; to what, though, we weren’t quite sure.

From the parking lot, the Best Western Golden Sails looked as barren and culturally devoid as one would expect, especially on an early Sunday evening. With few patrons in sight, even in the lobby, we began to wonder what we had gotten ourselves into. However, the encouraging smell of simmering meats accompanied by the faint pulses of horns and drums directed us onward. We followed our ears (and noses) to the PCH Club, the hotel’s venue for Grateful Dead tribute bands, and sure enough, a good old-fashioned zydeco dance.

Greeting us at the door were two ladies donning large cowboy hats and speaking in accents so deliciously thick they could turn a fish tank into a crawfish boil just by asking nicely. Poised by the entrance—blessed deliverance—were two slow-cooking vats: one with rice, the other with the promised gumbo. Next to it sat the ever-necessary Louisiana hot sauce. Though Frank and I were initially skeptical of this Los Angeles version of gumbo, our fears were assuaged while our taste buds were massaged.

The band was onstage and well underway with their jamming and hollering. The instrumental staples were all present: a drummer, a trumpet, a violin. The main singer played an accordion while shouting out food throughout the songs: “Jambalaya!” “Étouffée!” A boy no older than 10 was invited up onstage to accompany the band on the washboard, the apron-style instrument hanging down to his knees. While he clearly had limited washboard experience (or any sort of rhythmic experience, for that matter), that wasn’t the point.

The crowd included people ranging in age from 8 to 80. Some played pool or sat at the bar noshing on Southern cuisine—though most livened up the dance floor in pairs or solo. Couples who had clearly taken lessons repeated their practiced sequences across the dance floor (and tried in vain to stay on beat), while less trained dancers just hopped back and forth to the music. Frank and I toyed with the idea of joining the dance to give the other couples a run for their money. Before we could make any moves, however, we were intercepted by two regular attendees, who insisted on taking us for a spin on the floor.

There are as many ways to dance to zydeco as there are ways to play it, though the one taught to me by this very nice (albeit very drunk) woman followed a side/step/side/hop pattern that kept us in constant motion. Once I got the hang of the basic movement, the real fun started. For thrills, I would spin her around while side-step-siding. Occasionally I would change out the hop with a little dip, causing her to blush a shade similar to the Louisiana hot sauce (though it was probably less about me than the wine). Frank, however, was in desperate need of rescue as his partner seemed more preoccupied with where she was placing her hands than her feet, so I eventually cut in to remind him that he “owed me a game of pool.”

Before we headed out, we were corralled for a little more gumbo and conversation by a welcome committee of ladies in cowboy hats, one of whom we learned was from Mamou, Louisiana, about 150 miles inland from New Orleans. “Mamou is the real place to spend Mardi Gras,” she told us. Her brother, it turned out, was in the band. They had been bringing this musical (and culinary) extravaganza to the Los Angeles area for years. When we asked for her name, she replied: “You can call me whatever you like, just don’t call me late for dinner!” (Though it sounded more like: “Ja ca’ cahl meh whate’a’ jou like, jus’ dun’ cahl meh la’e fo’ dinuh!)

The event at the Best Western Golden Sails is just one small crawfish in a surprisingly large “Zydeco in Los Angeles” pot, one of our new friends told us. Southern California hosts several huge zydeco festivals in the summer, which we were advised to check out.

And so, as we headed into the Long Beach sunset on the Pacific Coast Highway, we decided we just might have to do that. After all, there are few places in Los Angeles, let alone the country, where so many people can experience such an intimate experience. In a city with more than a dozen freeways and a few million people, finding a corner with good food, music, dancing, and people is like a diamond in the rough—or rather, a diamond in the bayou.