The inspiration for our sculpture came from the vision of a set of crossed swords that solders walk beneath during military ceremonies. But what we ended up creating in Floating Curvilinear Arc, currently on display at the Pasadena Museum of California Art, also reminds us of a field of tall grass flowing in the wind, or a crystal kelp forest responding to the ebb and flow of the currents, or feeling the subtle undulation of the deck of a boat in calm seas, or the soaring of a condor. We’ve heard some viewers say it feels as if the sculpture is breathing.

We created these effects by sliding nine pieces of tempered glass—each 132 inches long, 3 inches across, and 1/4 inch thick—into beams of wood with a 70-degree angle cut into them. The weight of these strips causes them to bend gracefully at the top. There are flat pieces of black tile under these arcing blades, suggesting to the viewer that she might walk beneath (though there’s a cordon that prevents anyone from actually doing that because it’s too dangerous). Behind these alternating, crossed pieces are two other, slightly longer pieces of glass that are oriented horizontally on the wall—one has a stainless steel rod under its middle, which means the ends frown downward, and another has rods on the ends, which causes the middle to sag. Every few minutes, five fans whir to life and make the strips of glass bob and dance.

Floating Curvilinear Arc comes from our longtime obsession with the powerful, omnipresent force of gravity and its beauty. The sculpture is part of a larger exploration in our work of the poetic side of the natural sciences—geology, physics, chemistry—that are constantly at work in the world around us. In the roughly 40 years that we’ve been collaborating, we’ve returned to this again and again.

Even before we started working together, we separately nurtured an interest in the sciences through lifelong observation. As an ocean lifeguard in San Diego from 1960 to 1970, George had plenty of time to watch the tides come in high and low twice a day and to contemplate how the moon’s gravitational force pulls up those tides from our oceans. He saw how the tidelines, the size of the waves, the action of rip currents, and the movement of sand varied over time. Hikes through Yosemite also showed him how water tumbled thunderously over cliffs and how gravity can pull down sections of granite that crash to the valley floor.

Tom grew up on a farm in the San Fernando Valley in the 1940s and 1950s that lacked heavy equipment and required the invention of systems to move heavy objects. He learned, for instance, about gear ratios for a block-and-tackle pulley system for lifting pigs and steers. He learned about geology by digging tunnels and caves through the farm’s topsoil, reaching sand and rock, and then, about six feet down, layers of yellow red clay. This beautiful clay was the same stuff used to build the San Fernando Mission.

During Tom’s teenage years, he spent as much time as he could working on boats, eventually becoming a licensed sea captain in 1954. On a boat—even the 100-ton ones that Tom is licensed to run—you learn to respect the sea and the power of its waves to swallow you whole. Tom became aware of invisible forces—like the magnetic fields that guide the compasses on a boat. Tom actually minored in general sciences when he was getting his bachelor’s degree in industrial design at USC.

The cosmos that we live in, and we ourselves, are in constant state of flux, and it is this never-ending change that touches us. We hope to reflect at least a microsecond of all that change in our work.

Our work is also informed by our studies of the natural world. We are both voracious consumers of articles and essays about science and exploration. We devour Scientific American, National Geographic, and biographies on Galileo. Tom is a big fan of the way Leonardo da Vinci was able to marry science and art. And George has studied the works of and essays by the artist Robert Smithson, probably most famous for the large sculpture Spiral Jetty, which is a coil of earth, salt crystals, and rocks in Utah’s Great Salt Lake.

We met when George created a stoneware piece for a 1973 ceramics group show that had such large handles that it looked sculptural. Tom, who was a judge, wrote up the piece as best in show. We found a kinship in the ways we used the earth (and its physics) in our works—and in our love of the ocean. 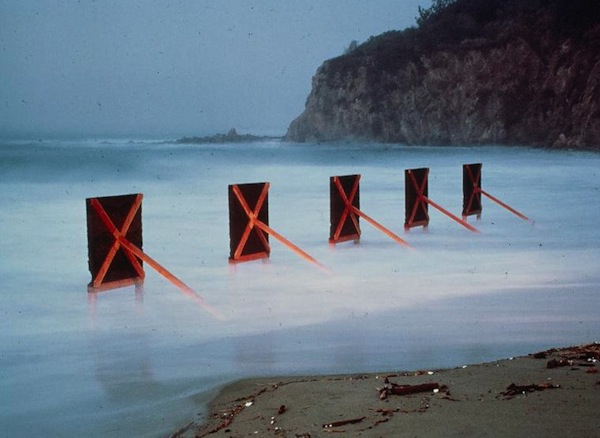 One of our favorite collaborations was Surf Line Erosion in 1981, a piece commissioned by the Newport Harbor Art Museum. We set up five slabs of compacted earth, supported with bracing, along the tideline in a cove in Laguna Beach. The slabs—which we created by mixing earth, sand, and bonding agents—echoed the surrounding cliffs in color, texture, and composition. At low tide, these pieces stood solitary on the sand. But at high tide, they were waist-deep in saltwater. We wanted to see how the Pacific Ocean would drag them away from their original positions, tear them apart, and knock them over.

We collaborated with Jim Irvine to videotape the project and Libby Jennings to time-lapse photograph the piece. It took six months of testing, plus three weeks of 14-hour days to set up. Within just 21 days, our work became little more than splinters scattered around the shoreline and lost to sea. Surf Line Erosion demonstrated how gravity, as channeled through the tides, and entropy were more powerful than man’s arrogant attempts to defy them.

When a piece doesn’t look beautiful—even if it perfectly illustrates the scientific concept we are exploring—we change course. George was recently working on a piece in which he tried to demonstrate the elegance of the Earth’s magnetic field. He had hung plumb bobs (weights with pointed tips, each suspended on a string) from the ceiling and set up magnets to pull them in different directions. He tried to figure out how to flesh the piece out—he tried making the plumb bobs move through glass tubes with a magnet at the end. But it ended up looking too much like a high school science project with test tubes. It seemed shallow, like a piece of decoration, rather than something with depth. So he dropped the project.

For our next challenge, we want to explore different states of water—steam and liquid water—and what happens when you throw shadows with glass and light around a room where these steam clouds are curling through the air. We’ve put together a working steam-making unit. And we’ve separately figured out how to make the glass and lights throw interesting shadows. We just have to test how all the elements work together.

Our delight comes in making these invisible natural forces visible and helping viewers see the world in a different way. The next time you look up at the moon, we hope you’ll remember how it affects our Earth. Maybe the next time you see a leaf falling from a tree, you’ll think about the gravitational glue that holds us all together.

Floating Curvilinear Arc is part of the “Time, Space, and Matter” exhibition curated by Betty Ann Brown. It is on display at the Pasadena Museum of California Art through August 31, 2014.