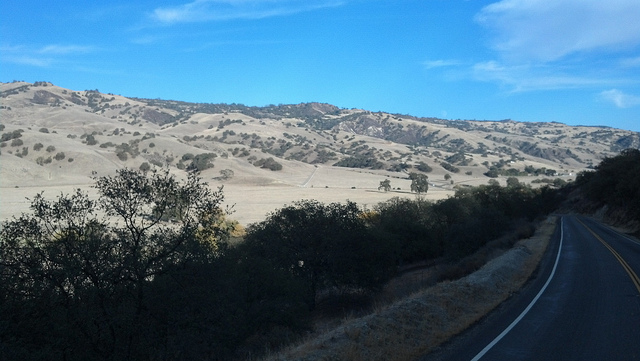 Public transportation is a huge challenge in Huron, the city of about 7,000 people in California’s Central Valley where I grew up. If you need to make the 110-mile round trip bus trip to Fresno to go to the doctor’s office, courthouse, pharmacy, or grocery store, prepare for a long and time-consuming journey. The rural bus system is slow, infrequent, and all but useless.

My cousin, a farmworker, was in a car accident when I was a kid. To visit him on his deathbed at the nearest hospital, my mother and I got on the bus in Huron. Three hours—and 13 or 14 stops later—we arrived in Fresno. In that time, we could have driven to Los Angeles, 192 miles away, with a pit stop at a burger place. Decades later, that bus ride still takes more than five hours round trip. There is only one bus to Fresno per day; it leaves Huron at 8:30 a.m. and arrives at 11 a.m., and then leaves Fresno at 3 p.m. to arrive back in Huron at 5:30 p.m. People who make that trip spend more time on the bus than they do running errands and attending appointments.

That bus ride is one of the reasons why, in 2008, I founded the San Joaquin Valley Latino Environmental Advancement Project (Valley LEAP), an environmental justice nonprofit that seeks to improve life in my hometown and others like it. The length of the bus ride is a powerful physical and psychological barrier for this farmworker city, which has one of the highest poverty rates (46 percent) in the state. There might as well be a wall between Huron and the world’s opportunities. It’s a struggle for Huron students just to get to the regional high school, which is 20 miles away and takes two hours round trip by bus. Students from Huron begin the school day an hour earlier and end it an hour later, which takes a toll on student achievement. To further one’s education in far-off Fresno or UC Merced is almost unthinkable.

Owning a car is tremendously expensive: the typical cost of gas and maintenance is usually between $400 and $600. For some farmworkers, who often make $1,200 a month, that’s as much as half their income. And we’re not the only town in the Valley where owning a car is a necessity. A forthcoming multi-community study by UC Davis researchers Jonathan London and Alex Karner found that a 45-minute commute by car gave Valley workers access to nearly 90 times more blue-collar, health, retail, and service jobs than a 45-minute commute by bus. Ninety times!

How do people get by? They collaborate. Last year, Eddy Reyes, one our fellows at LEAP, worked with scholars at UC Merced and UC Davis to survey 28 farmworkers in Huron, Hanford, and Fresno to learn how much money they spend on their cars. He discovered that half of them carpool to work—or to put it another way, they leverage their social capital for economic mobility. In this survey, Reyes uncovered an entire informal transportation system that is virtually invisible to outsiders and policymakers in Sacramento. One feature of this system is the raiteros—retired farmworkers who have the trust and respect of people in Huron and provide informal transportation to get people to hospitals, courts, and other critical appointments in Fresno for a cheap rate.

Ride-sharing works in Huron because in this diverse society of migrants, there is a long tradition of social ties that intertwine generations. For example, when my father, a bracero, brought my mother to Huron from Michoacán, she was immediately adopted by an older person in the neighborhood and mentored on adapting to her new American reality. Today elders will often provide rides to recently settled migrant farmworker families who are new to Huron and unfamiliar with the public transportation system. They also provide a tremendous service for people who don’t know how to drive or who lack a car or driver’s license.

We in Huron should be proud of this system, but there’s more we can do to improve transportation and open up access and opportunities to the people here. A Caltrans-funded planning process that resulted in a report by Valley LEAP, the City of Huron, and the local government commission recommended strategies to improve safety for pedestrians and cyclists—like widening sidewalks and creating bike lanes—and to improve the local public transportation system by adding benches, maps, and schedules at Huron bus stops.

There are other ideas as well. At Valley LEAP, we want to see the city’s raiteros go “green” by making the city of Huron’s two rarely used hybrid cars available to them. With careful scheduling, raiteros could earn an income and spend less on gas by, for example, taking a family to a child’s asthma appointment at the Central California Children’s Hospital in Madera County. This plan could also save money for Fresno County, which pays for expensive taxi rides for the elderly with Fresno County’s Measure C funds. Making ride-sharing green would lower transportation costs and lessen pollution impacts for both families and the city government.

We’d also like to figure out how to use community-based vans instead of cars so raiteros can shuttle more people to jobs and appointments, and so there will be fewer vehicles on the roads. Vanpooling cuts greenhouse gas emissions for travel by 77 percent—even more than riding some buses and trains.

California Vanpool Authority—or Cal Vans—already does some of this work, getting students to school, workers to farms, and correctional officers to prisons in the Central Valley. Unfortunately, Cal Vans is only available to seasonal users who ride five to seven days a week. We’d like to see the Cal Vans program make some exceptions to this rule so that a portion of their vans can be used based on need rather than on a set schedule.

California is always ahead of the game when it comes to technology and innovation. It’s time to embrace the Valley’s social innovation and stimulate a fluid system to connect our orchards, crops, neighborhoods, downtowns, and more than 20 educational institutions. In ads and labels, organic is sexy, sustainability is hot, and green is slapped on everything (green or not). What we really need is for the workers behind those labels—the people who grow and pick the nation’s produce—to have greener rides, greener pockets, and a harvest of opportunities, too.