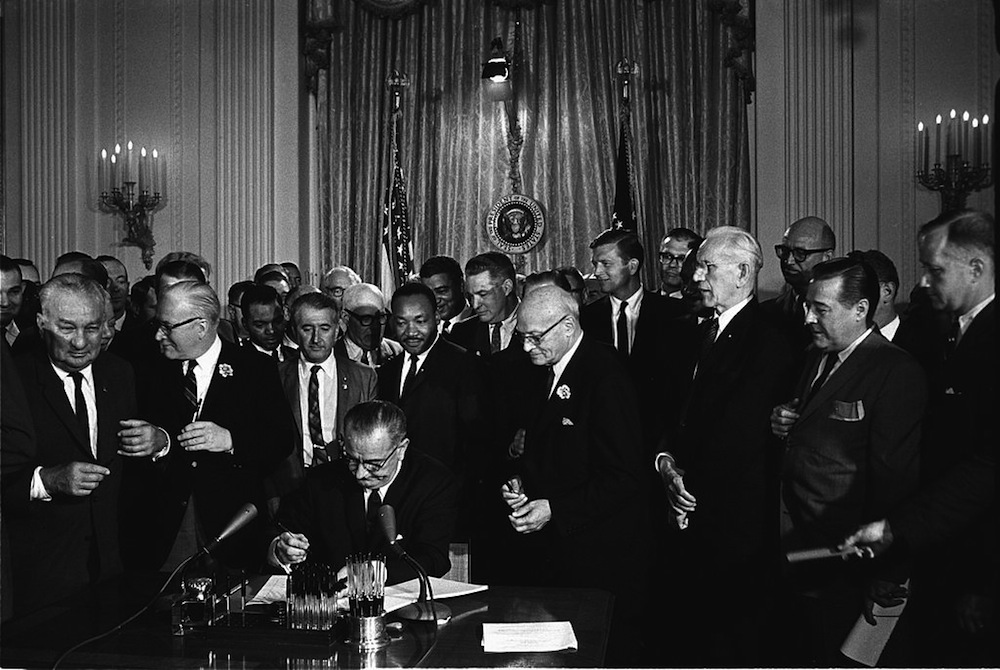 Californians, like other Americans, like to think that race should never be a qualification for a job, that everyone deserves an equal opportunity and a fair shake. This principle undergirds our Civil Rights Act, which turns 50 this month. And yet increasingly, many employers are treating race as a qualification, especially for people of color. We can look no further than the Los Angeles Lakers’ acquisition of Jeremy Lin. “Lakers land Asian-American guard,” exclaimed one headline. “In addition to what he’ll bring us on the court, we think Jeremy will be warmly embraced by our fans and our community,” said General Manager Mitch Kupchak. In other words, putting Lin on the court is a smart economic move in the country’s largest Asian-American market.

The prevalence of this kind of hiring—particularly in California, America’s most populous and most diverse state—suggests that the Civil Rights Act needs to be updated. California in 2014 certainly looks nothing like Alabama and Mississippi of 1964, which were Congress’ focus when it passed that year’s Civil Rights Act. The main question then was how to provide equal opportunity for African-Americans. A century’s worth of experience since the Civil War showed that whites in the Deep South could not be trusted on matters of race. Congress therefore prohibited, through Title VII of the act, racial discrimination in employment. Over the next several years, courts and administrators issued rulings to allow affirmative action in order to ensure that African-Americans were being offered the opportunity to be hired and promoted in all jobs for which they were qualified.

Today, however, employers have come to value racial differences in ways that were unheard of in 1964, and do not fit with traditional conceptions of affirmative action. Organizations of all kinds today hire and place workers using a practice I have called “racial realism”: seeing color as a real and significant part of workers’ identities, a qualification that is good for business.

As with the Lakers and Lin, employers use racial realism to make customers of different backgrounds feel comfortable and welcome. As Wells Fargo, the San Francisco-based bank, explains on its website: “To know our customers and serve them well, the diversity of team members throughout our ranks should reflect the diversity of the communities we serve.” The Walt Disney Company similarly states, “When our people reflect the communities we serve, it enhances the way we connect to our guests, audiences and consumers.”

Government employers, including police departments and school districts, also have invoked racial realism, seeking to mirror the populations they serve to deliver more effective services. For example, California’s Education Code declares that the state traditionally employs a “disproportionately low” number of racial minority teachers, and should rectify this situation so that “the minority student [has] available to him or her the positive image provided by minority classified and certificated employees.”

And in low-skilled jobs, racial realism is often linked to perceived variations in abilities, rather than customer reactions. Sociologists Roger Waldinger and Michael Lichter’s study of Los Angeles employers found a common pattern of preference for Latinos due to their perceived diligence in manufacturing, food service, and other jobs.

While racial realism lacks the animus that characterized the racism of the Deep South 50 years ago, it is still problematic—both legally and for minority opportunity. Title VII of the Civil Rights Act provides no authorization for race to be a job qualification. And the Equal Employment Opportunity Commission has denied the legality of motivations of firms such as Wells Fargo and Disney’s. If employers in Alabama could claim they preferred white workers because their customers preferred white workers, the cause of equal opportunity would never have gotten off the ground. This is why courts have ruled that firms should have their workforces mirror their job applicant pools, not their customer bases.

Court interpretations of the Constitution allow for racial realism in policing. Courts have argued that the “operational needs” of police departments require race-based hiring to serve and protect nonwhite publics. But these decisions make no allowances for teaching. California’s rationale for teacher diversity would seem to have been precluded by a 1986 Supreme Court decision, which explicitly stated that hiring teachers to be racial role models was impermissible racial discrimination because it could go on forever, with no remedial purpose.

Moreover, the employer preference for Latino workers, often immigrants, provides opportunities for eager workers, but is often propelled by stereotypes that Title VII was supposed to eliminate, and often at the expense of other workers stereotyped differently, especially African-Americans. The Equal Employment Opportunity Commission has initiated action against employers who use this strategy, grouping the cases under the heading no one would have considered in 1964: “Hispanic Preference.”

For high-skilled nonwhite workers, racial realism can be a double-edged sword. They may have ready access to jobs—then find themselves stuck in positions where they deal with same-race clients or citizens. For example, sociologist William Bielby’s analysis of Merrill Lynch found nonwhites were continually limited to positions where the firm thought their presence could help penetrate minority markets. The problem can be exacerbated when compensation is linked to sales or other measures of effectiveness, and certain employees are pigeonholed into less profitable outlets or divisions in poorer African-American and Latino neighborhoods. African-American managers sued Walgreens drugstores on this basis, claiming lost promotion and advancement opportunities, and won $24 million as compensation.

Why the shift from equal opportunity to racial realism? Demographics. Beginning in the 1960s, American birthrates declined as the country became more educated. By the 1980s, these factors had created a great demand for low-skilled immigrant labor—first in California, where history, geography, and network ties combined to attract newcomers—and then the country as a whole. Immigrants brought or started families in California and followed one another here; as a result, the state’s Latino and Asian immigrant communities grew rapidly. By 2000, California was a majority-minority state where nonwhites outnumbered whites; in March 2014, Latinos became the single largest ethno-racial group in California. The authors of the Civil Rights Act could not have anticipated this shift—and included no provisions for it.

Employer demand for labor brought immigrant workers here, but now immigrants themselves, and their descendants, are shaping employment patterns as consumers of private and public goods. Employers are feeling pressure to balance the rights of their workers, especially those workers of color who for too long have faced unequal opportunities, and the interests of customers and citizens, including those of color, who rightfully expect the best service from businesses and especially from government.

The Civil Rights Act, as written, puts employers and employees alike in a bind. It is time to revisit the law, and make adaptations that fit our new demography—and the law’s original goal of equal opportunity for America’s most disadvantaged.