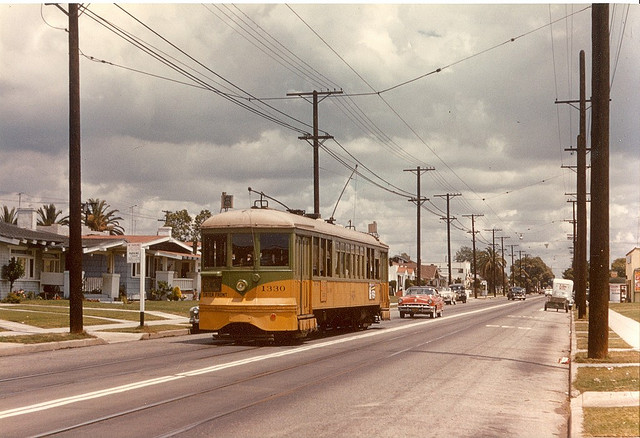 In the early 1900s, streetcars were the dominant mode of transit in the Los Angeles area. They ran from Pomona to the ocean, and from the San Fernando Valley to Long Beach. The addition of a streetcar route to any area immediately made that land more accessible to downtown and therefore more valuable.

One of us used to live in a neighborhood near the intersection of Westwood and Santa Monica boulevards that exemplifies the sort of development spawned by the streetcar. The boulevards are lined with commercial structures and surrounded by blocks of multi-family housing, where Leah lived as a UCLA graduate student. Slightly further away from the major streets are single-family homes.

Today, we think of the streetcar’s impact on Los Angeles as a matter purely for the past. As early as the late 1910s, Angelenos began abandoning streetcars for increasingly affordable cars. The very last streetcar tracks were pulled out of the ground in 1963.

But in a very profound way, the streetcar retains a hold over Los Angeles. In recent research, we found that places near now-extinct streetcar stops remain notably denser today.

As economists who study cities and local governments, we wanted to understand how cities evolve over the long run. The project was sparked in part by a conversation we had walking down Hollywood Boulevard with an architect friend who pointed out some still-visible influences of the streetcar. How much of a city’s development can be explained by market forces? And how much is due to the long reach of the past?

To answer these questions, we calculated the shortest distance to the now-extinct streetcar for each of Los Angeles County’s 2.3 million properties. We then assigned to each property the population density of its neighborhood, and sorted properties by their distance to the streetcar. 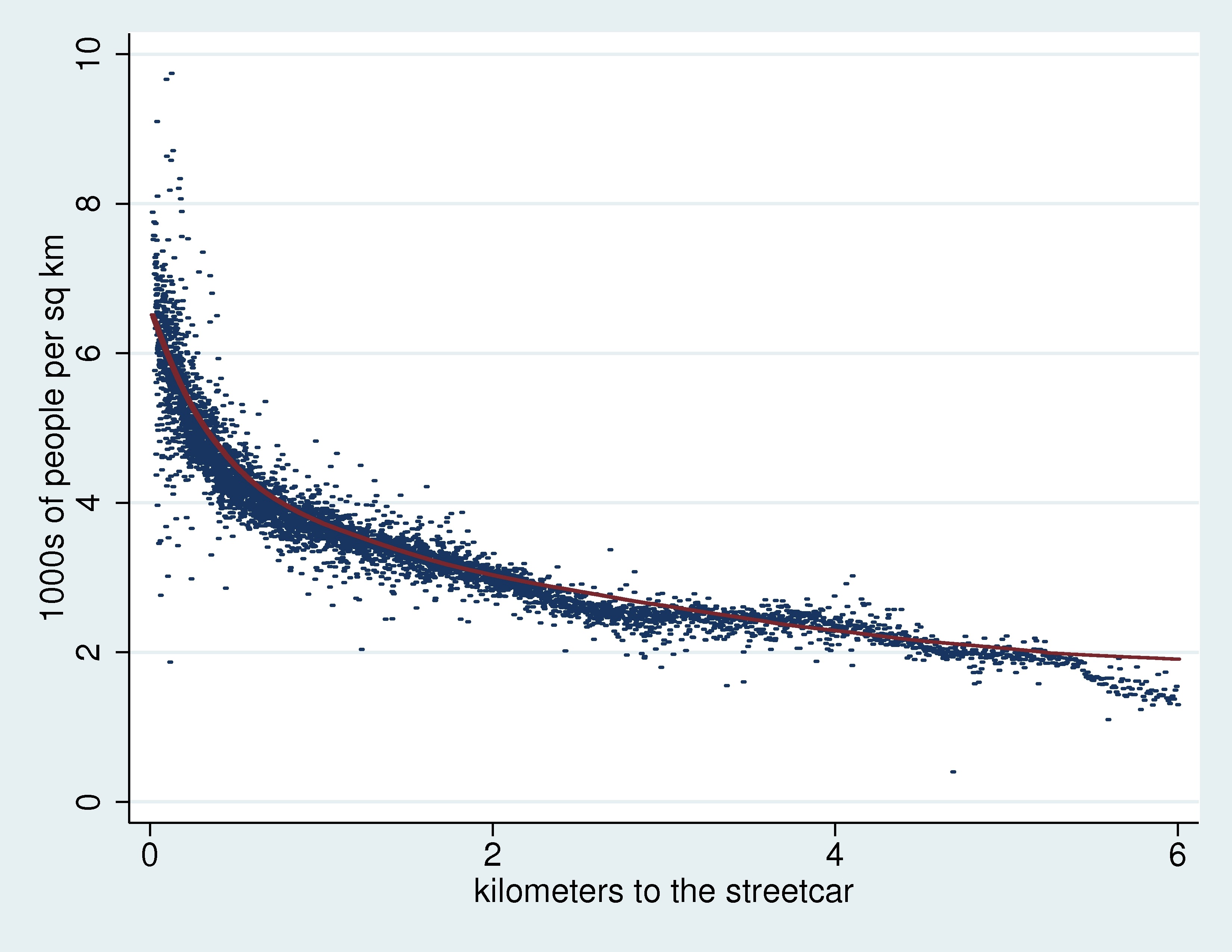 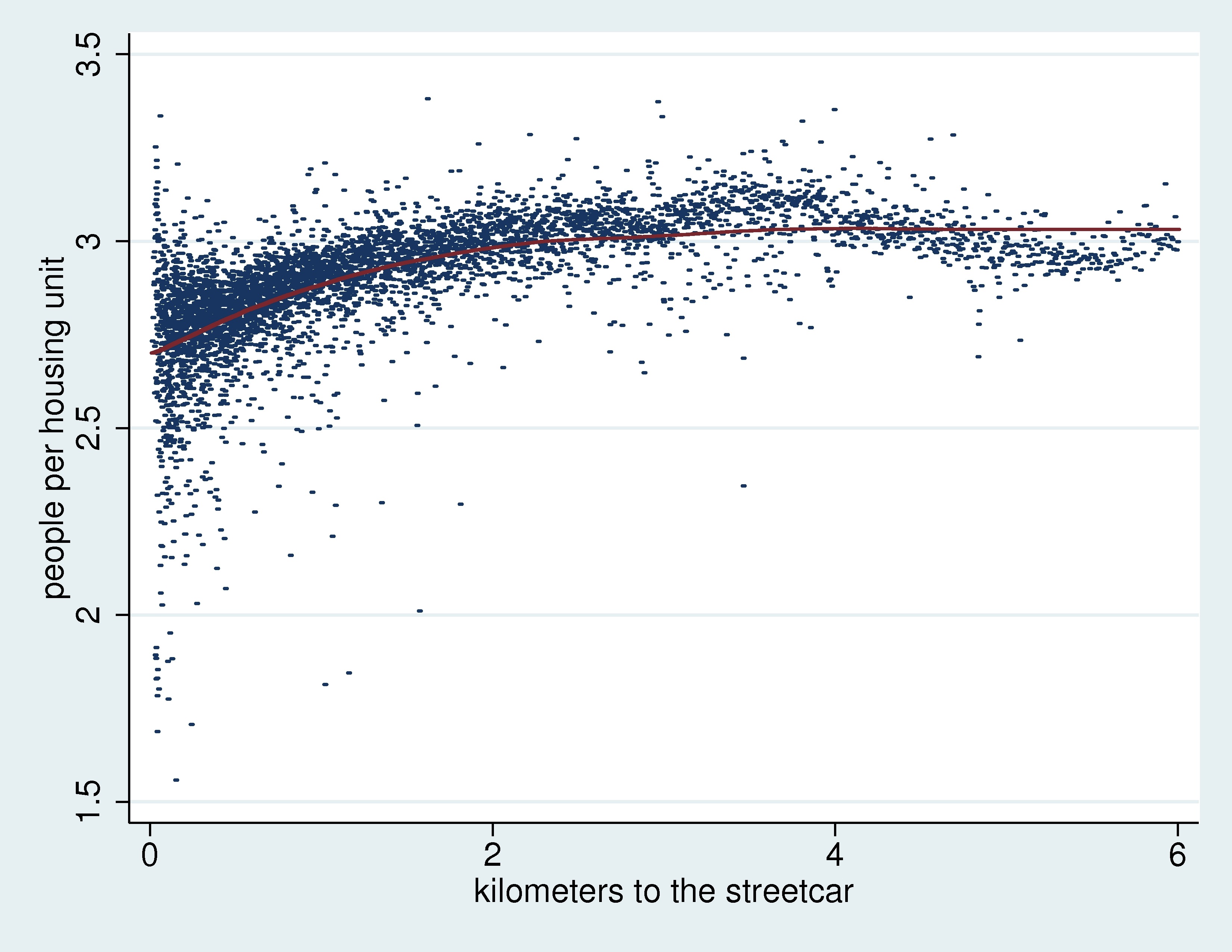 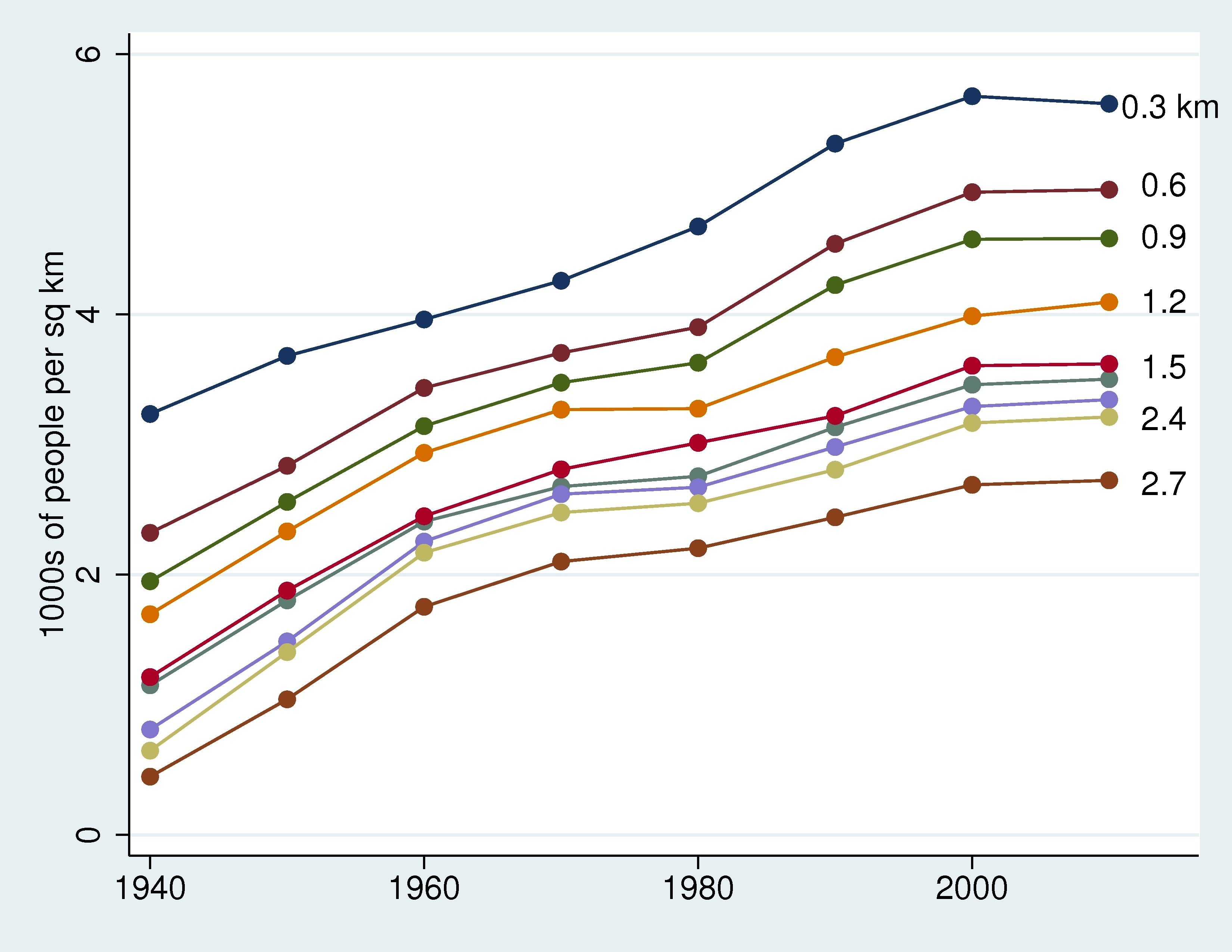 Why, after almost 100 years and the addition of literally millions of people to the metro area, does the population density of neighborhoods still reflect the extinct century-old transportation system?

One explanation is that streetcars were built in particularly nice places–and that this niceness, and not the streetcar, caused and continues to cause the density. But when we used statistical techniques to correct for this, we found that things specific to where the streetcar was located, such as the distance to a major road, or the location of modern transit nodes, account for only about one-third of what you see in the pictures above.

An alternative explanation for the density near streetcars is lingering old structures. In this explanation, places near the streetcar are getting less dense, but it’s a slow process as new, smaller and shorter structures replace older, larger and taller ones. Figure 6 above hints that this isn’t likely to be the case, since everywhere gets denser over time. When we look directly at whether old or new buildings near the streetcar are constructed more densely, we find no difference.

This leaves two remaining potential culprits for the density at extinct streetcars: land use regulation and the self-reinforcing economic benefits of density, which economists call agglomeration.

Is this zoning pattern a relic of the past, too? Los Angeles had its first zone code in 1922, well after the streetcar’s heyday. Using the digitized 1922 zone map, we see that 1922 zoning allowed more construction at places near streetcars. This means that when zoning appeared, it codified what was already happening on the ground.

But we also learn that zoning has changed—about 30 percent of properties have a different zoning designation today than in 1922. Of those properties that did change, about two-thirds changed to a designation that permits less dense construction. However, all of these changes in zoning are uncorrelated with distance to the streetcar and therefore have no impact on the relative leniency of zoning near streetcar stops.

It’s hard to draw firm conclusions about what this tells us. Some economists view zoning as a requirement to build things people would not otherwise build in the absence of the regulation. Others argue that zoning is simply window dressing: the outcome of a political process in which cities yield to their constituents’ demands.

If zoning is a hard and fast rule, then it could cause density near streetcars. If zoning is, instead, just the outcome of political or economic maneuvering, then we care about the underlying politics or economics that drive the density we see. We can’t distinguish between these two explanations, and certainly the possibility remains that other forces are changing zoning.

So perhaps the real culprit behind zoning change and density is agglomeration, which economists use to explain, for example, why businesses continue to locate in Manhattan, even though the real estate is so expensive. Businesses could benefit from locating near other businesses, sharing customers or even parking lots. And when people move into apartment buildings near others, they can enjoy more coffee shops and restaurants.

But if agglomeration is causing density along old streetcar routes, it’s probably not the kind of creative-type agglomeration of which Richard Florida sings praises. Florida has championed a view of cities in which growth is created by a creative class, made up of highly educated workers, artists and bohemians, whose interactions spawn innovation. As far back as we can measure (1950), relatively lower income people live close to the extinct streetcar.

Although it’s tempting to think of the built city as a record of the past, we know that not all of the past gets preserved. The clear imprint of the old streetcar on today’s city tells us that regulation and economic forces worked together to ensure the past informs the present.