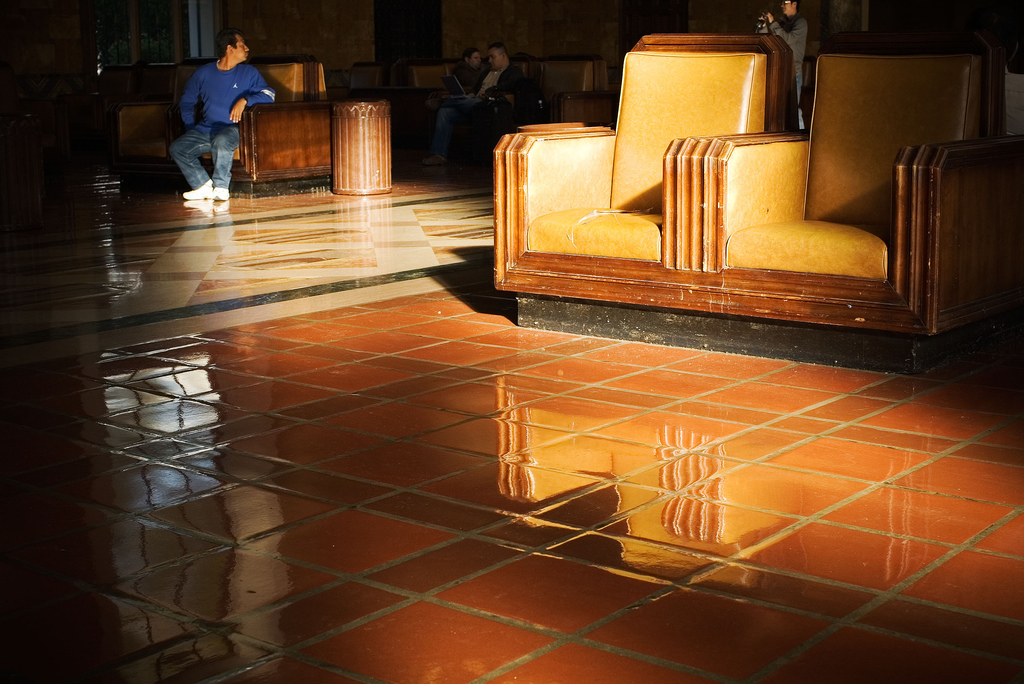 Zócalo’s editors are throwing it back to some of our favorite pieces from the archive. This week: Writer Chiwan Choi reflects on #90for90, an experimental pop-up poetry reading project at L.A.’s Union Station, and how presenting nightly art in an open space can boost a “community’s spirit, camaraderie, morale, and economy.”

On September 2, actress and poet Melora Walters walked into the Traxx Bar at L.A.’s Union Station, in her hand a copy of Ted Hughes’ Birthday Letters, the powerful poems he wrote about the suicide of his first wife, Sylvia Plath. Walters sat down on one of the wooden stools around the tall bar table in front of a mic. The bar was nearly empty, a few drinkers nursing their glasses and staring up at the muted TV sets high up by the ceiling, with baseball highlights and football commercials on a loop.

For the next half hour, she read, her haunting voice echoing out from the bar and into the cavernous train station, unsuspecting travelers looking around to see where the voice was coming from, as if this was the chanting of a ghost. 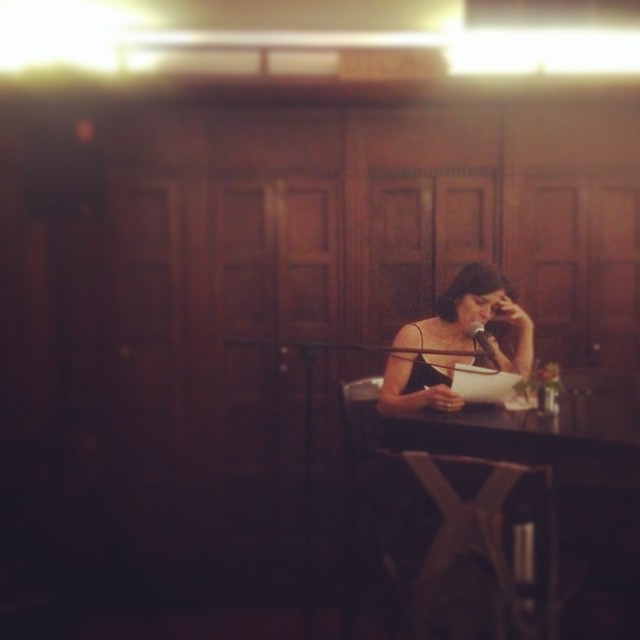 I’m involved with a small publishing imprint, Writ Large Press, which developed an experimental pop-up project a few years ago called the Downtown Literary Alchemy Laboratory (DTLAB) that brings people together through texts, books, and the act of publishing. The project proves that places like downtown aren’t just blank canvases when it comes to creating art. We want to pour our share of talent into an existing world, to add, to give freely, and then pass away.

The series #90for90 was this summer’s iteration of DTLAB. It brought free literary and community events to Union Station for 90 consecutive nights, including that poetry reading with Walters on the 66th night. Through #90for90, we wanted to explore what happens to a community’s spirit, camaraderie, morale, and economy when we present art in an open and public space night after night.

I first had the idea after I spoke at a panel discussion at an Association of Writers and Writing Programs conference in February. I found myself repeating a refrain: Writers should partner with businesses in their communities. For example, instead of paying rent to a venue for a book release event, writers–who will bring in a crowd–can convince a business to share in the profits.

It is worth exploring and establishing the value of art in a neighborhood. Too often, artists and writers serve as the “fertilizer” to make an area cool enough for outside investors to come in, build new condos, raise rents, out-price existing tenants and businesses, and change the character of the neighborhood without input from those who have called it home for years. It’s something I saw when I lived in the Bushwick section of Brooklyn about 10 years ago and see currently in downtown L.A. today. By partnering with established local business owners, artists and writers can help to strengthen the businesses, giving them a better chance to survive and flourish as neighborhood rents go up.

Members of my family have lived and worked in downtown L.A. for more than 30 years. When my family first moved to the U.S. in 1980 from Paraguay (after having moved to Paraguay in 1976 from Korea), my mother worked in sweatshops here. And my first job was as a cashier at a combination mini-mart and hamburger joint on Main Street between Winston and 4th streets. I earned a little extra by holding a little brown lunch bag full of cash for the coke dealer outside the store.

My friends and I used to spray graffiti on the sides of buildings as a way of attacking what had been built to divide, walls that marked the point where the inside people no longer had to share with or even deal with the outside people. As a sign of how things have changed downtown, that activity now bears the more respectable name “street art.” And street art is now corporate-sponsored, funded by entities that want to teach us to love the walls, to convince us we are happy to be excluded because it’s only from the outside that we can see the art. I love when artists want to create art here, but it doesn’t help when they pick names for their studios inspired by military constructs or lock away their entrances between metal gates and pit bulls.

Now I live on the corner of 7th and Los Angeles, in the same building where my parents live in a low-income unit. My brother lives a few blocks away, on 2nd and Figueroa. And while everyone downtown is happy that crime has gone down, we are also tired of people who want to deal with issues through avoidance: developers, for instance, who want to build bridges between buildings, so that people with money don’t have to walk past the homeless and other vagrants in the streets. 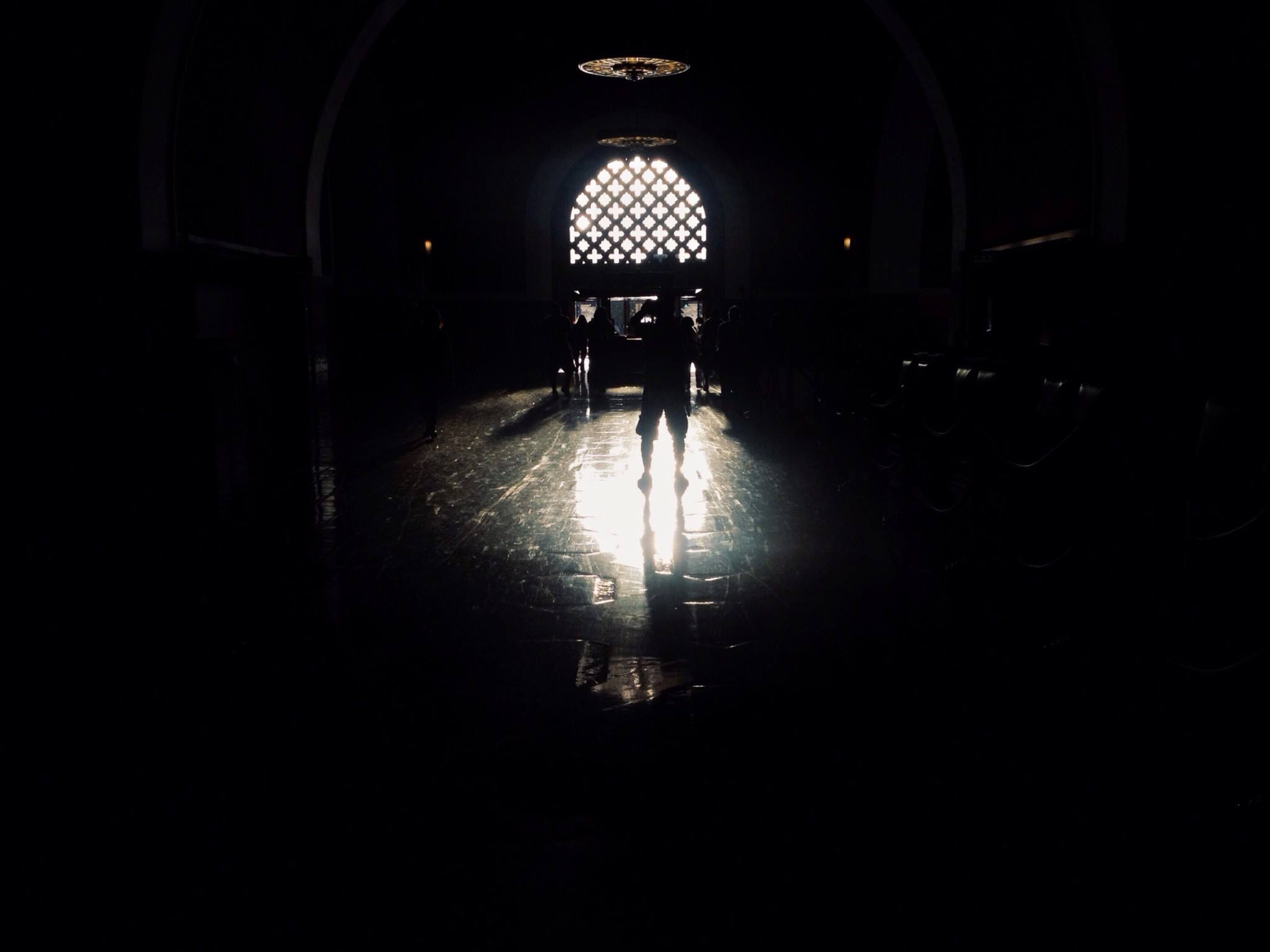 On the 18th night of #90for90, two teenaged boys were walking fast past the bar. An elderly woman was reading her poetry inside.

The boys stopped, sat down outside on their skateboards, and listened, not just to her, but to the rest of the line-up.

Afterward, they walked in to shake hands with all the poets they had heard. They asked if they could read something too. I nodded.

One of the boys took the mic, announced that he and his friend were waiting for their train back to Fresno, but wanted to contribute something to the night.

“I’ve never read anything before,” he said as he pulled out his smartphone and scrolled to find his piece. “But you guys inspired me.”

One week before #90for90 began in late June, I happened to meet Tara Thomas, who owns Traxx Bar and Restaurant at Union Station. She suggested we could do events at Traxx in the future. I got excited because Traxx Bar was one of the first “fancy” bars I’d gone to back in 1998. I liked the idea of being back in Union Station, a place that I traveled through almost every day for a year between 2006 and 2007 when I commuted between downtown and San Clemente.

Union Station, that great monument to transitory people, turned out to be perfect for us because what we did each night was to make artists appear in that tiniest, but most important, of universal events: that fleeting moment when individuals, each heading somewhere else and often in opposite directions, cross paths.

There was a couple rendezvousing at Traxx Bar on August 2, two people who always met at this bar and ended up staying for the entire reading when they learned the group of poets reading that night was from the Inland Empire.

“I’m from the Inland Empire,” she screamed. “We are checking this out!”

And there was the young guy in his business outfit–white button-down shirt, tie now loosened, jacket hanging on his stool–who sat at the bar for about 10 events. Every night he was there waiting for his train and asked me what events were coming up. He sometimes offered his critique on a writer or event. Finally, on September 16, our 80th event, he offered his own voice. At an event called Testimonios, where a group called the Northeast Alliance played music, burned sage, and chanted, and the host encouraged anyone at the packed bar to come to the mic to share stories of displacement as neighborhoods changed, he spoke. He talked about his parents, and how they had to leave the house in northeast L.A. where they’d lived for so many years because they could no longer afford it. And now he was here, immersed in our project, first by chance, now by choice, talking publicly about his personal history–which he admitted he doesn’t typically think about as he tries to climb the corporate ladder.

Reflecting on it now, I realize #90for90 was always about one thing: the end. It’s what poet and artist Amanda Katz, who presented her work on night #81, and I talked about in her studio: that the things we value most in life–people, pets, life itself–are things we know to be temporary. We didn’t want to build a monument or a fort. We wanted to experience collectively a life that is always counting down.

We knew that one day the final night of events would come. And it would end like all the other nights–the mic and speakers put away, the workers putting the stools up and sweeping, the bartenders covering the open bottles and calculating register receipts. Some late train rider rushing in to ask the bartender if it was too late to order a beer.

We’d be gone, too, perhaps to another bar somewhere in downtown. But we hope that one day, somebody walking through Union Station for one reason or another will say to herself, “Hey, I remember. I remember what was once here,” and words she had heard read by a poet whose name she can’t even recall will echo inside of her.