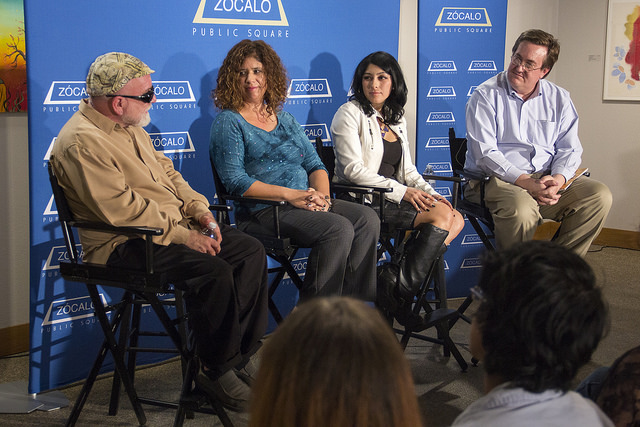 Can the arts make a city vibrant both economically and culturally? Artists and arts administrators in Visalia, California, think so. At a “Living the Arts” event co-presented by the James Irvine Foundation in front of a full house at Arts Visalia, they discussed their community’s thriving performing and visual arts scene and the support they’ve received from local government, businesses, schools, and individuals to make it possible.

At college in San Diego, Rosalinda Verde fell in love with opera—but she learned to love art while growing up in Visalia. “Instrumental people taught me that arts are always available here in our town,” she said. For a few years after graduation, she lived in San Diego—spinning her wheels and trying to figure out how to do art in a huge town. She decided to return home—in part for her family, and in part because she knew there would be opportunities here.

Verde asked Visalia’s Arts Consortium if she could put on an opera, and they didn’t hesitate to offer their support and encouragement. “‘If you want to do it, do it,’” she recalled hearing—a sentiment that’s been echoed throughout her arts career in Visalia. She put on a “Taste of Opera” performance, and built a local opera company from there.

Caroline Koontz, director of the Arts Consortium, credited the city and its people for making it so easy to support projects like Verde’s. “Our creative community is so collaborative and so cooperative,” she said. They possess “a spirit of giving that is really rare.” The consortium prides itself on its flexibility, which allows them to support start-up groups. Artists come to them with ideas, and then they figure out, one step at a time, what it will take to make them happen.

Richard Peterson, a lithographer and professor of art at the College of the Sequoias, was a bit less sanguine. “Government always moves way too slow for me,” he said. He pointed to zoning laws as one obstacle getting in artists’ way. Downtown Visalia doesn’t offer live/work spaces for artists. Such spaces are helpful to artists and also a draw for community members who want to meet and talk with the people whose art they’re seeing and buying.

James Ward, senior lifestyles editor of the Visalia Times-Delta and the evening’s moderator, pointed out that downtown Visalia remains much more vibrant compared to other downtowns across the Central Valley. What’s the difference?

Verde said that a few “excellent movers and shakers” have made a difference. She singled out Sound N Vision, a local nonprofit that brings bands from all over to local venues, as one of the organizations that has turned Visalia into a hub for creative people who, like her, leave for university and come back home.

Peterson added that the cultural scene at the College of the Sequoias is a big part of the city’s cultural life. College music groups play at different venues around town, and people come to the campus to see concerts as well. But he still thought there was untapped potential, particularly in the visual arts .

Peterson suggested that one way to get young visual artists integrated into the cultural life of the city would be to host an “art attack.” If Visalia invited artists into different city-owned buildings for a weekend to display their art, the city might harness the energy of many of the young artists and professors at the college.

What comes first, asked Ward—vibrant for-profit businesses or art that brings people to the businesses?

Koontz said that entertainment and culture will help Visalia and Tulare County keep talent from leaving. The people gathered in the audience for this event “can’t do much to change our air quality,” she said. “We don’t have the money in this room to build a four-year university.” But by creating a community where someone who wants to open a music studio can open a music studio, you’re building an audience for culture and for commerce, she said.

Koontz added that cultural tourists spend more money than any other kind of tourist. Someone who attends an arts event will spend an additional $34 beyond the cost of a ticket, providing a clear economic boost.

The panelists agreed there is more to do to bolster the arts in the city.

In the next five years, the Arts Consortium’s vision is to build studio spaces, triple its grant program, build an arts and education program, and move out from Visalia to support artists all around Tulare County.

Continuing to support local arts education—such as the city’s strong drama and band programs—is also key, they all agreed. Verde credited teachers in her elementary and middle schools for shaping her as a person and artist.

What kind of audiences, asked Ward, come out for the arts in Visalia?

Koontz said she was happy to see events like the recent Taste the Arts festival draw people of all ages and ethnicities, and families as well as adults.

Verde said that opera audiences do tend to be older, but she is actively working to get young people out. They’ve done zombie opera, they’re going to do drag queen opera, and they’re singing in new spaces in order to find new audiences.

In the question-and-answer session, the panelists spoke about the challenges of creating and supporting art in Visalia.

Grants are “extremely limited,” said Koontz. Tulare County is the only county she knows of that doesn’t have a community foundation making grants to local organizations. The city also currently doesn’t have a public art policy in place, which means there is very little public art. And, local organizations are all run by very small staffs—many of whom volunteer their time and all of whom are stretched thin.

Verde echoed this sentiment. She has a full-time job and a lot of other commitments; time is her greatest challenge.

Peterson said that the challenge he sees is “teaching people that without art we’d all be naked.” Artists design our clothes, our cars, our houses—everything we do—but it remains hard to convince people that they’re important. 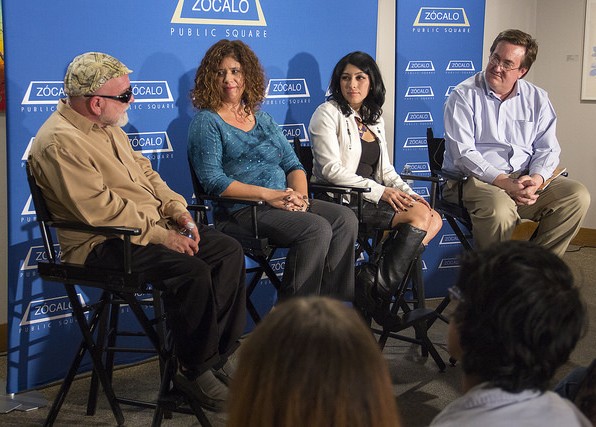 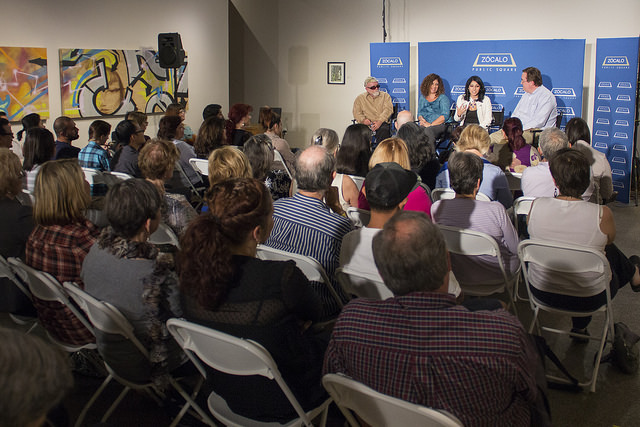 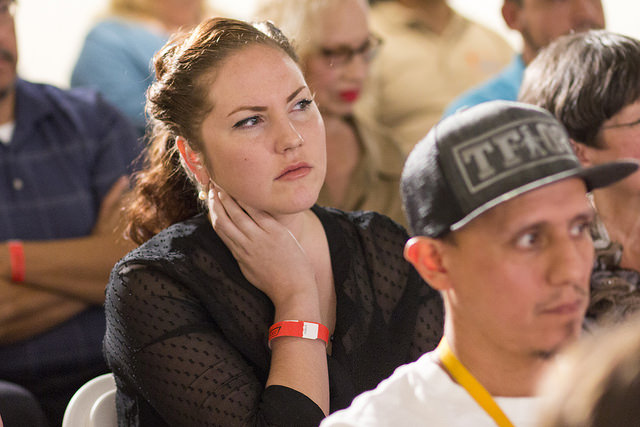 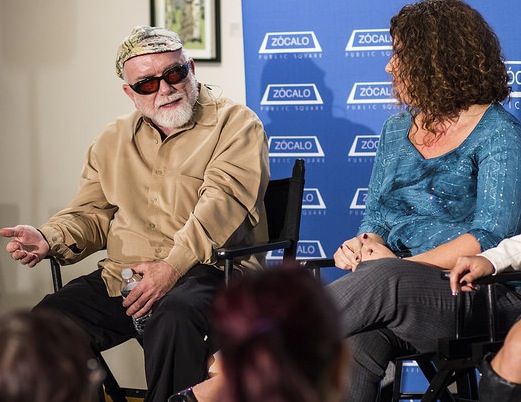 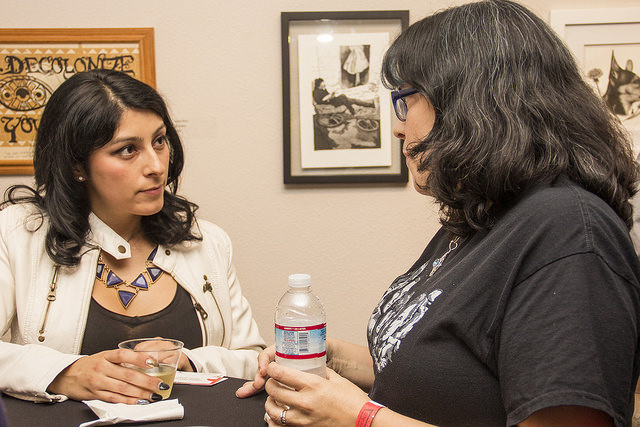 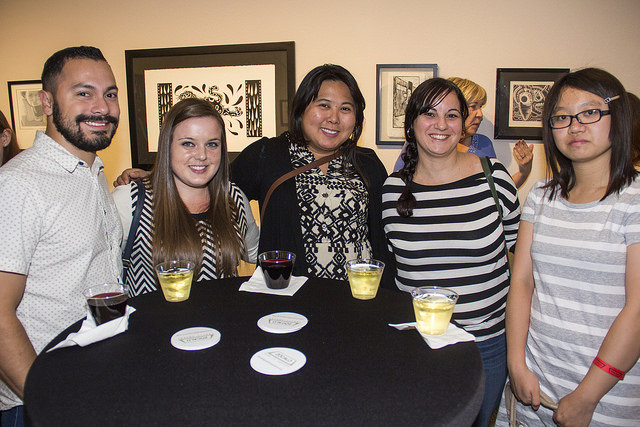