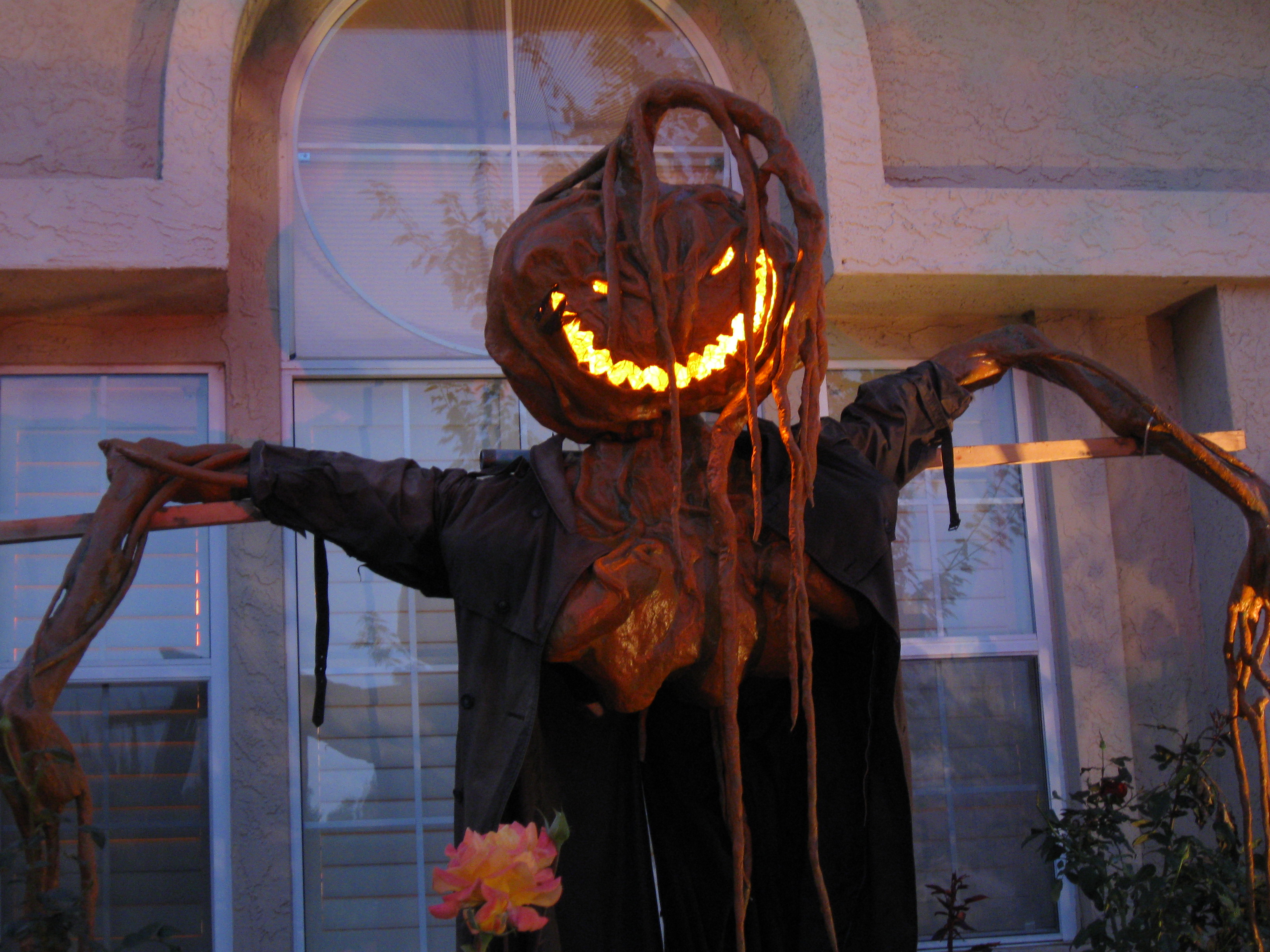 I took Stewie out of storage on the first of October. The eight-foot-tall scarecrow with a massive, mutated pumpkin head (he may have grown in the abandoned gardens near Chernobyl) is always the first prop I put up in my Hallowe’en yard display.

I debated for a minute whether “Uncle Albert,” a “groundbreaker” zombie that jerks out after visitors step on a pressure-triggered mat, should make an appearance this year. But who was I kidding? He gets the most screams, so of course, he was joining this year’s graveyard scene!

I’m an artist and potter, not a professional haunter, but I love to do up my own house in Folsom, California, for Hallowe’en. (I use the old-fashioned spelling to remind myself of the origins of “All Hallows Even,” the first name for the holiday.) And I enjoy helping others make creepy scenes as well, via my segment, “The Charmed Pot,” on the monthly podcast, Hauntcast, and, most recently by teaching a class at the ScareLA convention.

What are the lessons you’d learn in Hallowe’en 101 so that you can scare other people’s children on October 31? 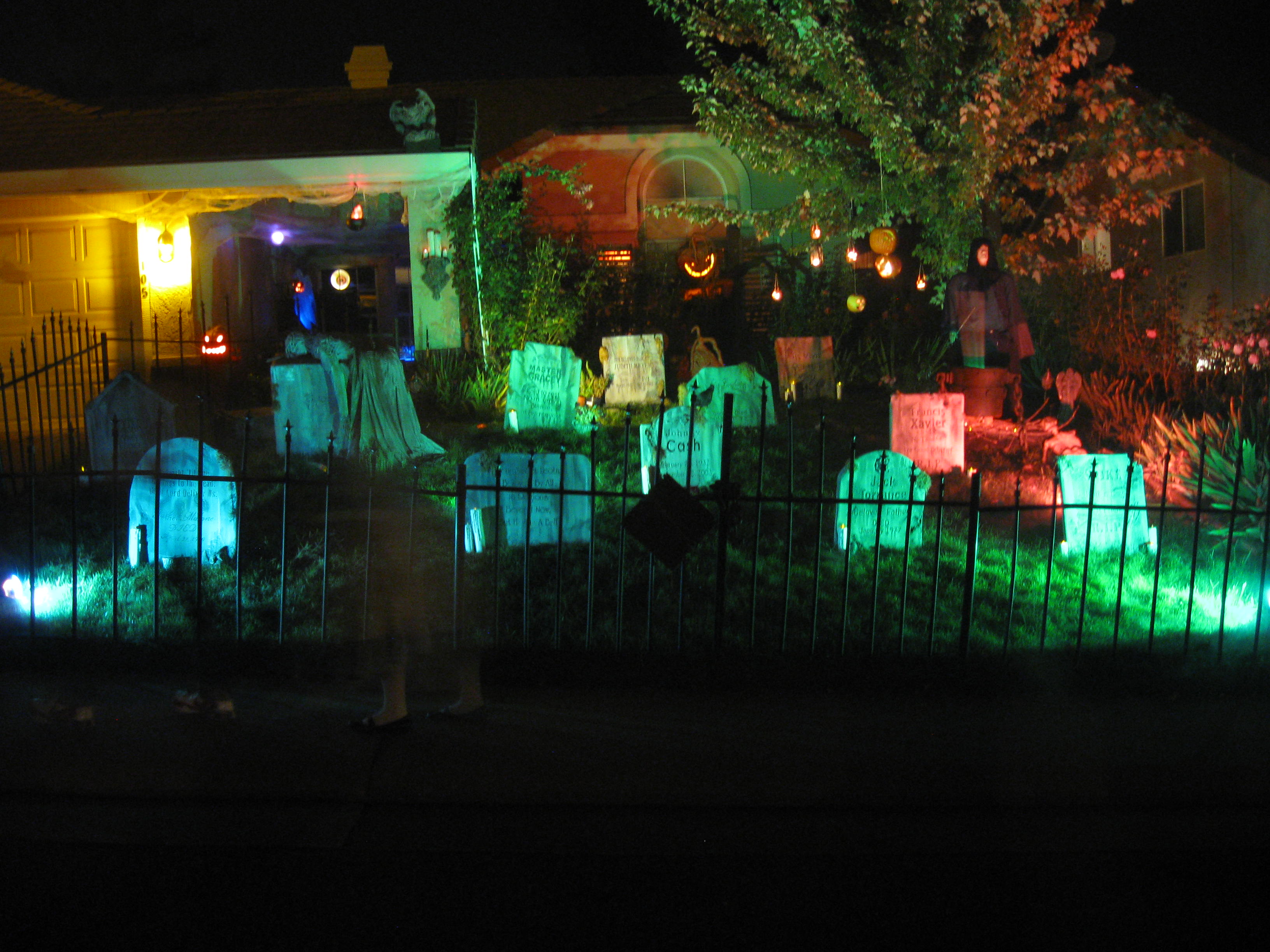 First, haunt with what you know.
I love to use monsters because my own love for Hallowe’en began in the ’70s, a “golden age” for monsters. Kids around me in L.A.’s San Fernando Valley were wearing masks of skeletons and the Creature from the Black Lagoon made by the Collegeville costume company. Most of us owned the vinyl record of Disney’s Chilling, Thrilling Sounds of the Haunted House, and we’d listen to Alfred Hitchcock, Vincent Price, and Boris Karloff narrate creepy urban legends and ghost stories on their own storybook LPs.

When I was in my mid-teens, my dad became a visual effects coordinator on feature films such as Dune and Bill and Ted’s Excellent Adventure. I was able to go onto working movie sets and was floored by the whole process, from model-making to the mechanics of how to “make it go.” While we only carved a single pumpkin with a goofy face for our Hallowe’en decor at my childhood home, observing all this movie inspiration and attention to detail have shaped my Hallowe’en approach.

After my husband and I moved to Folsom, 20 miles east of Sacramento in the foothills of the Sierras, eight years ago, I upped my game. I now had a house to decorate–and more disposable income, so the single grinning jack-o’-lantern was joined by leering pumpkins, a string of eyeball lights, a 450-watt, hand-triggered fog machine. 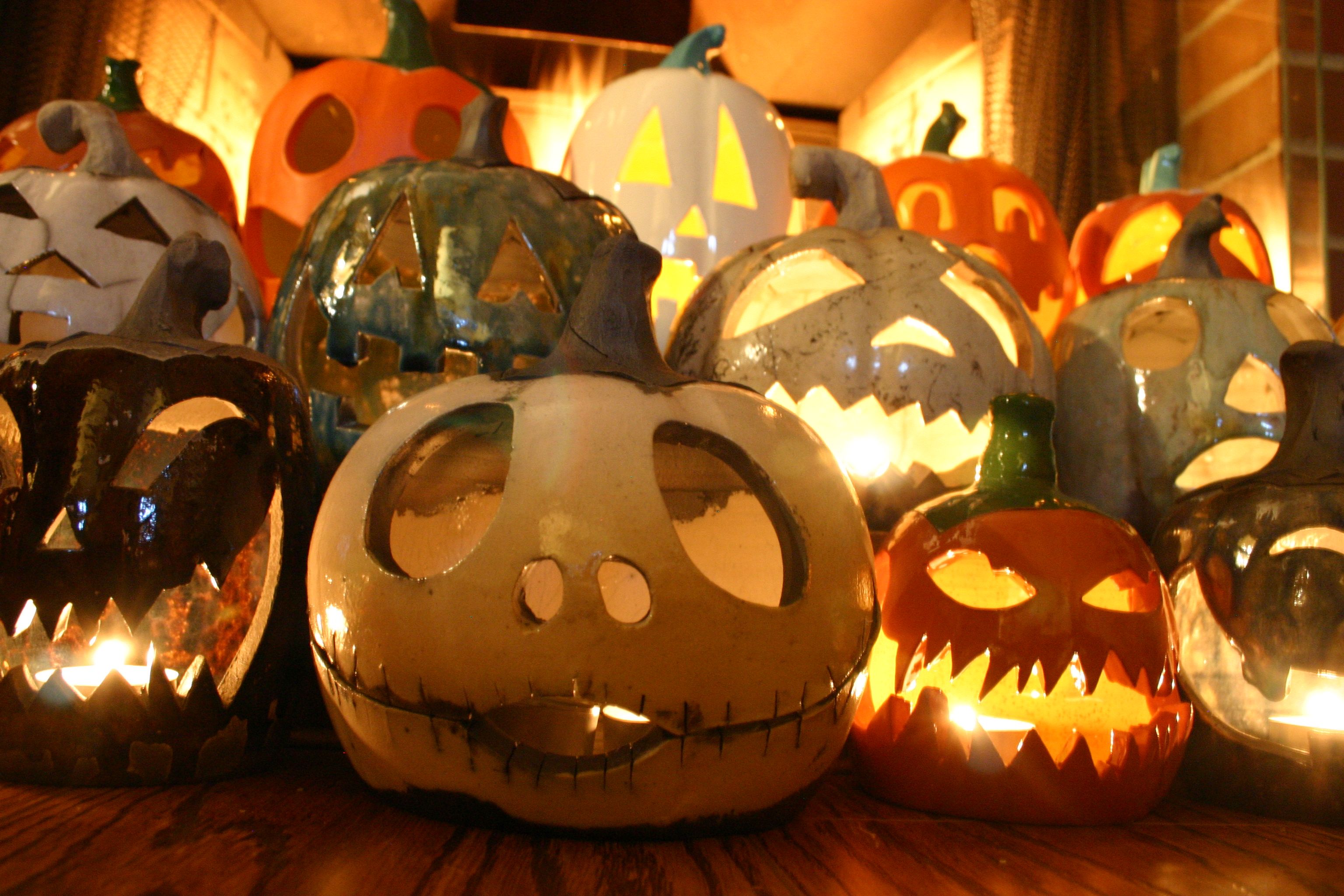 The Internet is scary useful.
Hallowe’en is huge on the Internet, full of ideas that can fuel experimentation. I’ve found sites for how to make tombstones out of insulation foam purchased at Home Depot (safety tip: always wear a respirator when carving tombstones, or you’ll be hacking nasty pink gobs from your lungs for the foreseeable future). I’ve learned about the best juice for the fog machine (Froggy’s Fog, for instance, is made from pharmaceutical grade chemicals). I made Stewie, my first prop, as the son of The Grumble created by a haunter named Spooky Blue. I made a “Beloved” tombstone from a tutorial by Terra Lair. If I had questions, I asked online forums like Haunt Forum and Halloween Forum.

A yard is a great canvas for telling a story.
Yard displays can be as simple as a mass of carved pumpkins, or as complex as a full light and sound show with animatronic and pneumatic props and projection effects. The key is to tell a story. For example: the bride waiting for her beloved, who will never return; Lizzy Borden and her murdered family; the miner perpetually searching for a vein of gold; a hitchhiker who asks for a ride home. And while there’s nothing wrong with what I call the “Heinz 57” haunt—where people throw together a bunch of scary props bought at the local Hallowe’en store in the spirit of the 57 varieties of Heinz products—a story can keep you and your haunt focused, avoiding a cluttered, disparate mess.

One master of storytelling is a guy who calls himself Pumpkinrot. His themes include Scarecrow Catacomb and the Swamp Foetus. He builds his props around each year’s idea, paying close attention to assaulting all the senses: eerie lighting, crunching leaves, clove-scented candles, toasted pumpkin smells. The Davis Graveyard, House Bloodthorn, and The House at Haunted Hill also inspire me. 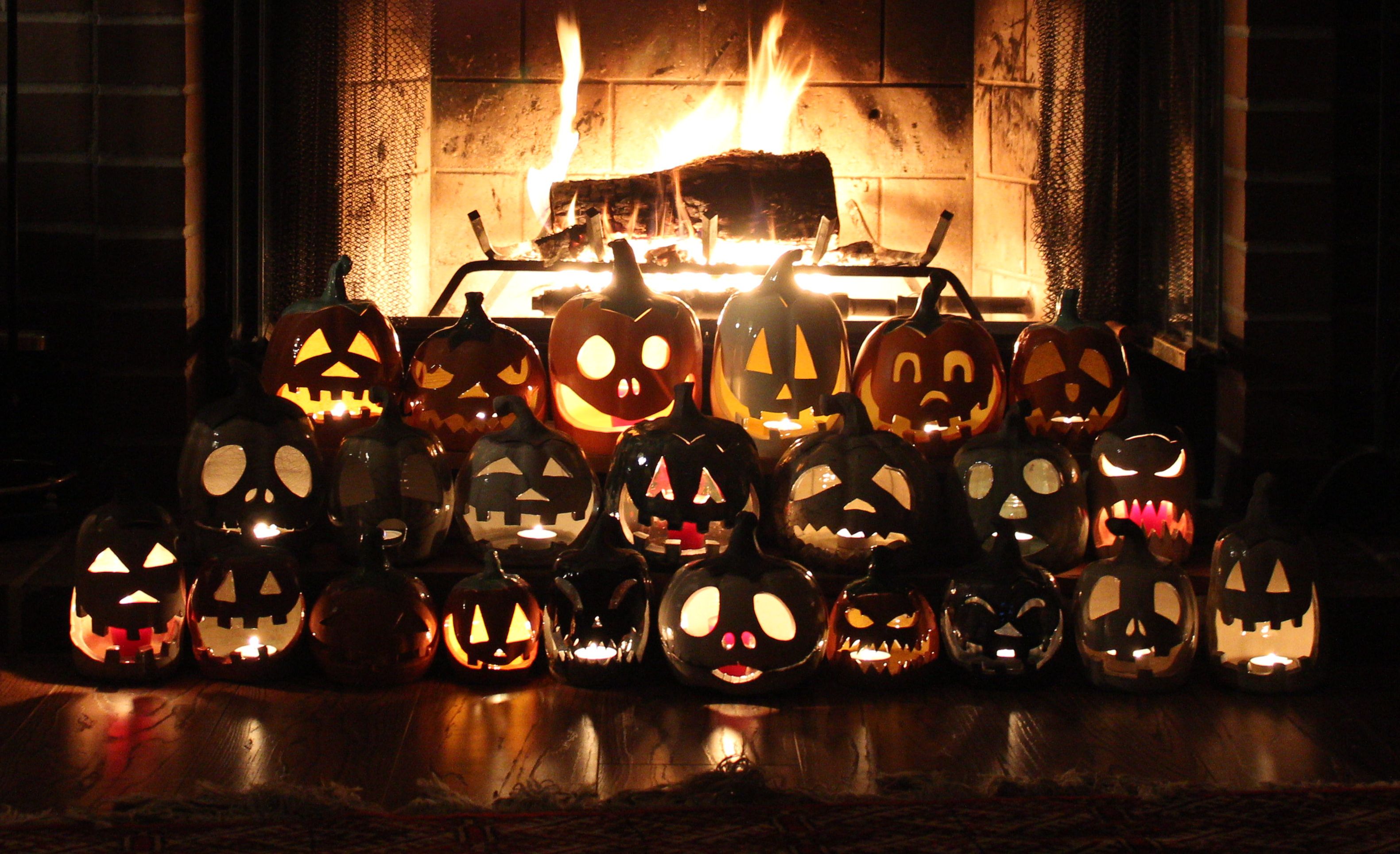 Once you have a story, you need a mood.
The right mood makes your victims’ lizard brains feel uneasy. I have small children who come to my house, so I try to stay away from blood and gore and concentrate on a creepy atmosphere. Lighting, sound, and a thick and creeping fog are characters in my haunt as much as Stewie is. At my display this year, visitors hear the constant sound of a grave being dug and the dirt dropping onto the lid of a coffin. By the time Uncle Albert roars and jumps out at them, they’re ready to scream!

Lighting is particularly important for mood. Blue or cool lighting makes your props and shadows appear farther away. Red or warm lighting makes props seem closer. And, as Robert Brown wrote in a lighting tutorial I return to over and over, haunt lighting is as much about creating shadows as it is about lighting your significant props. So this year, I wanted the blue of a cold night to wash over the tombstones. At the same time, I lit Stewie, who is closest to the house, from below in red, giving him a sinister, demonic look while creating a massive Stewie shadow that reached to the top of the roof.

Safety cannot be emphasized enough.
If you build a walk-through, you must be aware of tripping hazards and fire safety. You also must plan for a panicked victim to swat at your walk-through or run through it when he or she bumps into it. Make certain power cords are taped down or in an area where the public can’t get wrapped up in them. Do not skimp on the cost of potentially dangerous items, like pneumatic cylinders or fog juice. You don’t want to use a screen-door cylinder that isn’t designed to deal with the weight of a heavy prop and you don’t want to get sued for an asthma attack or worse.

That said, I don’t want my display–which I expand each year–to feel too safe. I want my neighbors to experience the kind of creepy Hallowe’en that I remember from before it was sanitized. A lot of people here now do a “trunk or treat” in a church parking lot, where children go from trunk to trunk to get candy because it’s “safer” than trick or treating house to house. There are often bouncy houses in these parking lots, which, let’s face it, make Hallowe’en easier for tired parents.

That’s too bad. Hallowe’en should be like the opening of the animated film based on Ray Bradbury’s book, The Halloween Tree, all shivery and delightful. When I see people drive slowly by my house to take in the scene, and hear the shrieks of trick-or-treaters, it makes all the hours, money, and mashed fingers worth it.