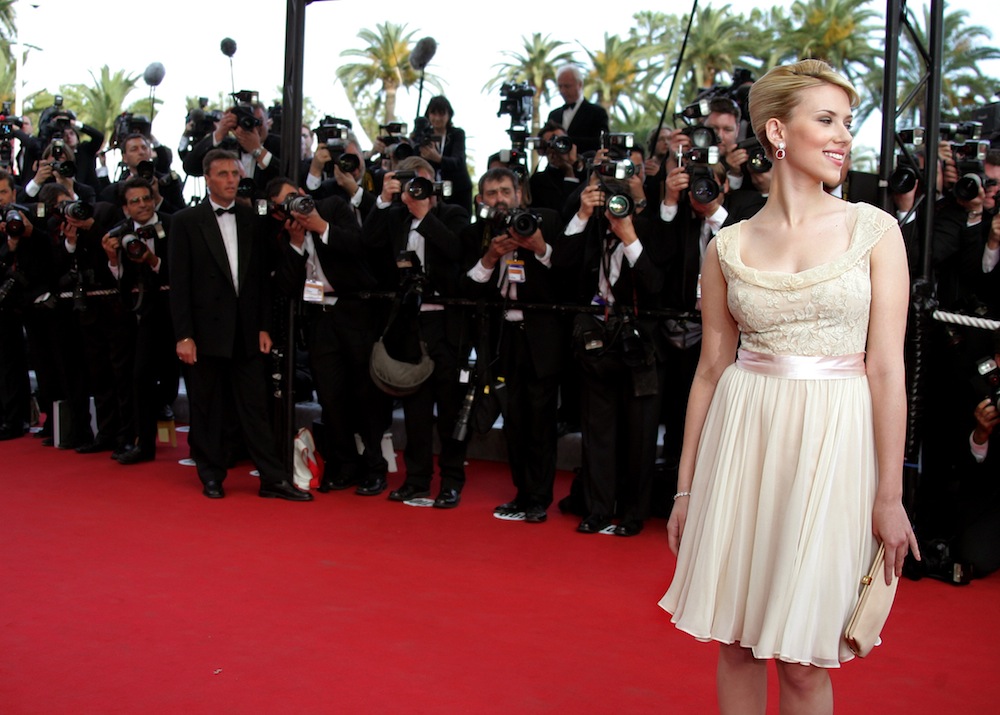 “Scarlett, Scarlett!” I waved pleadingly. Across the red carpet she sauntered, her eyes invitingly meeting mine. There I stood—a 24-year-old Jewish kid from Chicago decked out for the 77th Annual Academy Awards with my overgrown eyebrows and a cheap rented tux—face-to-face with America’s luscious girl-next-door, Scarlett Johansson.

I had been waiting all year to ask her this question: “What do you have to say to your fans in Japan?”

She cocked her head with a half-smile and then answered teasingly, “Well, I miss them.”

“We miss you, too!” I yelled back as she turned and walked away.

Coming from someone who looked like me, the question must have seemed “lost in translation.” But I was just doing my job. I was working for Yomiuri Shimbun, Japan’s largest newspaper. With more than 10 million daily readers, Yomiuri actually boasts the highest circulation of any daily in the world.

In the winter of 2002, back when I had never heard of Yomiuri Shimbun, I was just another lost history major living at home in Chicago after graduating from Stanford. I desperately wanted to move back to California, so I started applying for every job I could find. That’s when I first heard of Yomiuri Shimbun—on Monster.com. The paper had an opening for a reporter who would work alongside its Japanese Los Angeles bureau chief. Somehow, despite having no experience in journalism, I got the job.

The Los Angeles bureau covered the American West. I reported breaking news, politics, entertainment, and features. My reporting would mostly be incorporated into dispatches from the bureau chief, Kiyoshi Morita, whom everyone warmly called Mr. Morita. I also wrote for their English language paper, The Daily Yomiuri.

The bureau was small. Mr. Morita directly supervised two of us American reporters. A sportswriter from Japan also covered baseball with the help of another American reporter. Most of Yomiuri’s U.S. coverage came from its New York and Washington bureaus. In L.A., we were often looked to for features, which didn’t always run daily.

When we weren’t on deadline, we ate. Our meals became a sort of family tradition. Our Japanese colleagues often invited their wives and others from the Japanese expat community. For them, Los Angeles was the anti-Tokyo. They hardly wore a tie. But it was also an enclave of Japan in America. On my first day, I was welcomed with an extravagant dinner in Little Tokyo. Afterwards, the men went out to drink; the women went home.

We drank Sapporo at Japanese beer gardens. We shared sushi, donburi, and ramen feasts. We sang karaoke. (Mr. Morita taught me to sing a ballad to his native Osaka—in Japanese.)
Yet the border between Japanese and American—let alone Japanese-American—was far more fluid than our pseudo-Tokyo nightlife might suggest. In fact, working in a community with roots in Asia helped me better understand my own family’s experience of America. Our travel agent— an “Issei” (what Japanese-Americans call an immigrant)—spoke longingly about the rice and fish in her native Japan in the same way my mother—an Israeli-born “Issei” to America—spoke about the tomatoes and cucumbers of her youth.

My two American co-workers, like me, were “Nisei” (what Japanese-Americans call the first generation of immigrants born in America) from Japan and China, respectively. We grew up as a bridge between America and our parents’ homelands. I always felt American, but perhaps not fully so.  “American” was alternatingly used in our home to describe both the familiar and the foreign, what defined us and what we set us apart. The differences I shared with my “Nisei” coworkers—from what our parents cooked to whom they hoped we married—made me feel more completely American than I ever had before.

In this shared sense of difference, we were not alone. Like Los Angeles itself, our lives were woven into a larger tapestry of communities.

Los Angeles was built as much by refugees as by the car or the movies. Armenian survivors came after genocide, Ethiopians after famine. Mexicans (those who weren’t already there before the border crossed them) came after revolution. Central Americans fled civil wars, as did Chinese and Koreans. Persians escaped the Iranian revolution. The contractor who did our IT at Yomiuri had served in the South Vietnamese Army.

Japanese immigrants, for their part, first came to California in the 1860s during the Meiji Restoration, when the country rapidly modernized in response to its forced opening by Commodore Perry in 1854. The community grew until Congress passed the Asian Exclusion Act of 1924—before expanding again after World War II.

This global ebb and flow made L.A. fascinating to report from— and eat in. Community mixed with community, cuisine with cuisine. Korean BBQ tacos. Thai gnocchi. Brisket sushi.
I saw this fusion develop—in some small way—in myself: At the office, I alternated picking up the phone with a polite “Moshi moshi,” or a simple “Hello.” At Japanese restaurants, I got waiters’ attention by shouting “Sumimasen!”Curry katsu reminded me of my grandmother’s chicken schnitzel—swapping the potatoes for rice and adding a better sauce.

My sister found a picture of me in kindergarten—dressed in a kimono, with golden blond hair, waving the flag of the rising sun—from my Jewish school’s “International Day.” It hung above my desk.

Working for Yomiuri from 2003 until 2006, I also had the chance to cover every state west of the Mississippi except for North Dakota.

Mr. Morita’s favorite state was New Mexico. We ate fried bread outside Taos Pueblo—the oldest continually inhabited settlement in America, then drove in search of ranches owned by Julia Roberts, Dennis Hopper—and Donald Rumsfeld. In Santa Fe, we visited Georgia O’Keefe’s sunflowers and watched the sunrise over the Sangre de Cristo Mountains. We drove down the spine of I-25, following the Rio Grande past towns like Elephant Butte, Truth or Consequences, and Las Cruces. We arrived in El Paso to report on a war story from Fort Bliss.

Later, I drove to the Trinity nuclear test site in the heart of New Mexico for the 60th anniversary of the moment when, on July 16, 1945, man had “become death, the destroyer of worlds.” The sand was still turned to glass.

Our reporting was not always quite that serious.  We covered The Wizard of Oz in Kansas, Field of Dreams in Iowa, and Route 66. Mr. Morita and I were a strange sight covering the rodeo.

We twice interviewed Governor Arnold Schwarzenegger, known among Japanese by the endearing term “Schwa-chan.” At the Michael Jackson trial, crazed fans danced as the King of Pop jumped atop his SUV—even as his talent, and an acquittal, did not fully obscure a dark past.

“The past is never dead, it’s not even past,” William Faulkner said of the South. That’s true for the entire country.

My first big assignment was covering President George W. Bush’s “Mission Accomplished” speech. In a fancy San Diego hotel, I gorged on an endless buffet alongside the White House press corps as the president flew out to the USS Abraham Lincoln to have his USS Missouri moment. Two years later, I watched the president again in San Diego mark the 60th anniversary of the end of war with Japan. Standing next to the USS Ronald Reagan, he said that Iraq would be transformed from enemy to friend, just like Japan had. Hurricane Katrina had crashed ashore in the Gulf Coast that morning. He barely mentioned it.

In Hawaii, we interviewed Senator Daniel Inouye. He served in World War II as part of the 442nd Regimental Combat Team—an all Japanese-American unit that remains the most decorated in American history. Many of its members volunteered at U.S. internment camps. When Inouye left for war, his father told him that if he must die for his country, “do so with honor.” He nearly did, losing an arm fighting in Italy.

Afterwards, Mr. Morita and I visited the USS Arizona memorial where “tears” of black oil still well up from a wreck entombed with the dead. Mr. Morita bemoaned that most Japanese visitors to Hawaii did not come here. I told him I believed most American visitors did not come either.

Sometimes, to be a reporter is to bear witness to tragedy. At the Red Lake Indian Reservation in northern Minnesota, a 16-year-old shooter killed 10 people—mostly classmates. Wailing rose above the beat of drums at the memorial. As a “foreign” correspondent, was I supposed to treat this horror as a human tragedy or as a quintessentially American one? I’m still not sure.

For another story, the beatnik poet Lawrence Ferlinghetti, hand running through his dignified white beard, told me about coming ashore in Nagasaki as a young naval officer as “bleached-white bones” stuck through the ashes.

For me, this searing movable feast—this eye-opening American education, courtesy of the Japanese newspaper subscriber—eventually came to an end. I had my fill.

I wanted to continue finding myself, this time by working directly in diplomacy—hoping that I could help prevent us from becoming lost in translation again.