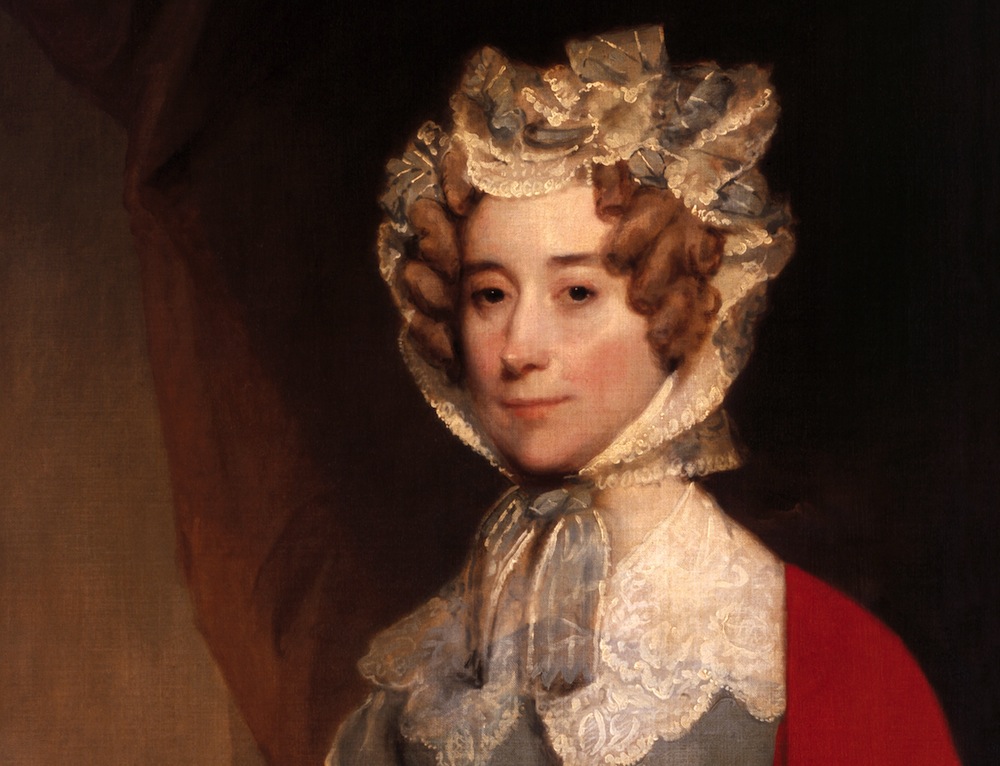 It was hard for Louisa Catherine Adams, the only first lady born outside the United States, to say where she came from. She began her life in a narrow alley in London, in 1775, but she was taught not to think of herself as British. Her mother, Catherine, was English; her father, Joshua Johnson, was a merchant from Maryland and an American patriot. When she was 3, after the American Revolution broke out, and when it was hard for a man like Joshua to remain solvent and safe in London, the Johnsons moved to Nantes, and Louisa’s earliest memories were in French. When she was 8, the family returned to England. She was told that she was American, but she was raised as English girls of her class were raised: for parties, for prettiness, for a husband. She met the man who became her husband, John Quincy Adams, when he was a young diplomat visiting from Holland.

Her mother was happy with the match: If Joshua wanted their daughter to marry an American, how could Louisa do better than the son of the vice president of the United States? Her father, however, was less thrilled; he would have preferred a Southerner over a Yankee. John Quincy’s mother, Abigail Adams, was furious. When she guessed the engagement—he had avoided telling her—she wrote to him, “I would hope for the love I bear my country, that the siren, is at least half blood.”

As it happened, Louisa was already an American citizen. The proof is there—the plain fact of it, printed and indexed—in the annals of the Maryland State Senate: “An ACT to declare Joshua Johnson, merchant, his wife and children, citizens of this state.” Back then, what it meant to be an American was still being worked out: Louisa, for instance, was made a citizen of the state of Maryland, not the United States, at a time when the United States were, not was. There were vast dissimilarities in the union that seemed to matter—differences between the North and South, East and West. And there were differences between an American from London and an American from America. When Louisa married John Quincy, the United States was an idea, a place that existed only in stories and in her father’s claims to difference. It was no more real to her than the inside of St. James’ Palace or playing “duchess” in her dress-up games.

In the United States, a woman, in addition to making the home a “bosom” of comfort where her husband could take comfort from his rasping cares, represented the embodiment of political values in private life, the repository of republican virtue. While insulated from the corruptions of public life, the American woman was to represent and safeguard morality, and to instill that morality in children. She was supposed to educate sons and daughters—especially sons—to love their country, their father, and their God; to distrust state power; to exalt purity and self-sacrifice.

Louisa had learned these lessons, but incompletely. She learned to soothe cares by singing in the parlor, not by serving a well-cooked meal and well-scrubbed floor. She learned to decry the King of England, but accompanying John Quincy to Prussia after their marriage, she had delighted in dancing with the King of Prussia. She resented the call to self-sacrifice.

Louisa was 26 when she first stepped onto American soil. It was a dim, cold day—Thanksgiving—when she arrived at the Adams’ paternal mansion in Quincy. “Had I stepped into Noah’s Ark,” she wrote in her memoir Adventures of a Nobody, “I do not think I could have been more utterly astonished.”

The Adamses were as determined to see the differences as she was. To them, she was “a fine lady”—not a compliment. Louisa was given special foods at dinner, a separate plate piled with preserves. She was treated with solicitous attention, which “appeared so strongly to stamp me with unfitness.” She felt unfit herself. She had been trained to run a staff of servants. Abigail—whom Louisa saw as a kind of American archetype—bragged of waking at 5 to milk the cow.

Louisa was an Adams, but she rebelled against rooting herself in Quincy’s stony soil. As someone who came to know the United States from the outside looking in, Louisa was prone to reflect on what her American identity meant in ways that most native-born Americans rarely do. She could see what others could not always see: that even though men claimed to have completed a social revolution, a meritocracy of virtue, they were as other men were: ever sensitive to hierarchical distinctions. She was quick to see the demagogic susceptibility of democracies and the triumph of emotions and instincts over the republic of reason. She was skeptical of the American faith in the perfectibility of man. She distrusted “the inflating and vainglorious fancies which we are too apt to attach to human greatness.”

Louisa saw how ridiculous, and how tragic, were the heroes of the American pantheon: the “peering restlessness” of Thomas Jefferson; the wild, tyrannical tendencies of the quintessential democrat Andrew Jackson; the maneuvers of politicians who denied playing politics. And she saw how great the great could be, too. Of her father-in-law, John Adams, she once wrote, “Every thing in his mind was rich, racy, and true.”

She had to prove herself as an American, because others were quick to see her as something else. She and her husband had to bat down stories that the English Prince Regent had asked them to represent him at the christening of the English minister’s wife; James Monroe even asked John Quincy if the story was true. Western members of Congress referred to her “diplomatic tricks.”

“One of the greatest taxes I have to pay is that of concealing that I am a traveled lady,” she wrote drily to John Adams after grimacing through a particularly terrible music performance. During John Quincy’s (unacknowledged) campaign for the presidency and then for reelection, she tried to combat rumors about her nationality in an unprecedented way, writing a kind of campaign biography about herself. “Having never before appeared in print, and possessing no ability for authorship, [the writer] is indifferent to criticism, and careless of effect,” she wrote, “so long as she has the happiness to show that Mrs. Adams is the daughter of an American Republican Merchant.”

But she understood that being an American was not as simple as a matter of birth—even for those born in the United States. She saw, from afar (from Russia, in fact, where her husband was the U.S. minister plenipotentiary), how the War of 1812 united a disparate people once besieged, because she saw the effect it had on herself. “If I could correctly judge of the effect upon the feelings of our Nation of this transaction, by those which it has produced among the Americans we have here, I should look upon it as a blessing rather than a calamity,” she wrote to John Quincy. “Our Situation is perilous in the extreme,” she wrote to John Quincy, “but it is extreme distress alone which can ever discover to us the extent of our resources.”

But she also came to realize how fragile the bonds that held the country together were. She believed that factions and political parties would pull the country apart; she knew that the persistence of slavery would cause a violent rupture. She saw how tenaciously, how quickly, people held to their own local customs and mores, sometimes at great cost.

And this was hard for her, because she did not really have a local identity. She lived a life of trunks and packing cases; sometimes said she had no home. She wrote three memoir sketches, but she gave them titles without identification or antecedent: Record of a Life. Narrative of a Journey. Adventures of a Nobody.

She was an Adams, but unlike the Adamses, she had to construct her identity as an American. She would be independent. She would learn to take care of herself, to stand up for herself. She would claim rights. “In the marriage compact there are as in every other two parties, each of which have rights strictly defined by law and by the usages of society,” she once wrote furiously to her husband, protesting how he made decisions for her life without her input. She would think about what it meant to be a woman, and what it meant to be a daughter, wife, and mother. She would learn to write well, and in writing to assert her selfhood.

She would accept that it was hard, and a never-finished process. In that, perhaps, she did embody a true American ideal. Thinking of women, she wrote, “Under all circumstances we must never desert ourselves.”