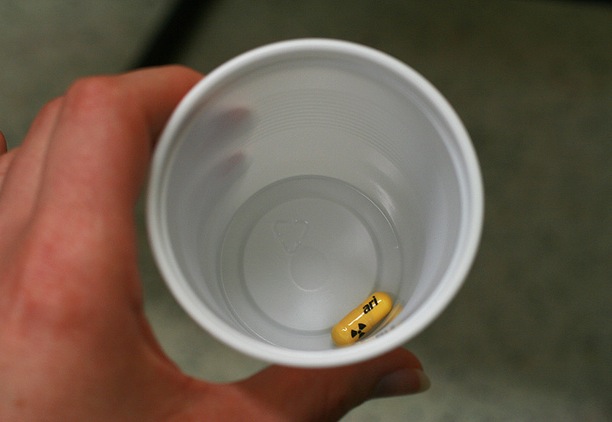 I walked through a hospital door marked “Nuclear Medicine Department” knowing that when I left, I’d be radioactive.

It took just a few minutes for the doctor to administer a dose of 100 millicuries of radioactive iodine, or I-131. He wore a surgical mask, gloves, and a heavy lead apron. He removed the pill, with tongs, from a cylindrical canister and dropped it into a paper cup. Then he backed out of the room. “As soon you’re ready,” he said from the hall, “make your way out of the hospital.”

I put my fingertips to my neck and lightly touched the red scar where my thyroid had been removed. I took a deep breath. Get on with it, I thought. This pill was the last step of my treatment for thyroid cancer. Taking it would ensure the cancer was all gone, and that was all I wanted.

But first the radioactive iodine pill would make me dangerous to others. For at least 24 hours, I’d emit radiation. For several days, my sweat, saliva, and urine would be radioactive. For 10 days, I was supposed to avoid contact with other people.

These days, quarantine is all over the news: Several states have instituted mandatory quarantines for healthcare workers and anyone else exposed to Ebola, and Americans overwhelmingly support these measures.

Like many people, I’ve been following the story of Kaci Hickox, the Maine nurse put under mandatory quarantine after returning from Sierra Leone. She has resisted the order, saying that she doesn’t pose a threat to public health—and that the quarantine violates her civil rights.

But as I prepared to swallow that pill, quarantine was exactly what I wanted. In the summer of 2008, I spent so many hours in waiting and exam rooms wishing I was somewhere else. That morning, though, I wanted to stay at Alta Bates Summit Medical Center in Oakland, California. I wanted to stay in a lead-lined room until it was safe for me to be around other people.

I wanted to stay in a lead-lined room until it was safe for me to be around other people.

Instead, I ingested my dose of radioactive iodine, then walked out the door marked “Nuclear Medicine Department.” I rounded a corner and immediately collided with a man walking down the hall.

“If you have to get cancer, this is the one to get,” said the endocrinologist who called with the surprising results of my biopsy.

I had papillary thyroid cancer, the most common and treatable form of thyroid cancer. The survival rate for this cancer over five years is 97 percent—in large part because of radioactive iodine (I-131). Unlike chemotherapy, which attacks healthy and cancerous cells alike, I-131 is extremely targeted. Since thyroid cells alone absorb and retain iodine, the radioactive iodine pill essentially acts like a “heat-seeking missile”: It finds and destroys thyroid cells.

In July, a surgeon removed my thyroid, the butterfly-shaped gland that produces hormones that help regulate metabolism, heart rate, and body temperature, and generally keep things working as they should.

Five weeks later, I met with a doctor in the nuclear medicine department to prep for my I-131 treatment the following week. His weary, clipped manner suggested he was tired of dealing with anxious patients. It’s a perfectly safe treatment. I’d recommend it to members of my own family, he said. He gave me a one-page handout with instructions like: “Stay seven feet away from other people for 5 to 11 days.” Blushing, I asked him about, um, “physical intimacy.” His response: wait, oh, maybe about 10 to 14 days.

On the verge of going radioactive, I wanted more than a “maybe” or an “about.” I wanted to be told exactly what to do. But both he, and all the instructions I found online, offered a range of days for when it was safe to prepare food for others or share utensils. There were only two things about which the doctor was absolutely clear: I was to have no contact with children and pregnant women. And I could not get a ride home from the hospital.

So I drove away from the hospital that September day with a too-tight grip on the steering wheel. To prepare my body for the I-131, I was taken off replacement thyroid hormones. I felt slow-witted, unable to concentrate, lethargic. This would be hard to explain if I’m pulled over: I’m not intoxicated. I’m just a radioactive, hypothyroid wreck.

If I had taken that same dose of I-131 in Europe, I would have likely been quarantined in a hospital for a few days. But the U.S. did away with required hospital quarantines for radioactive iodine in 1997—in fact, it’s rarely an option. Many hospitals have eliminated their radiation isolation rooms.

Some people, especially those with young children, choose to stay in hotels while radioactive. But what about the health of the hotel guests sleeping on the other side of those thin walls? Or the pregnant maid who unknowingly handles contaminated sheets, towels, and drinking glasses?

I went home, but before I got out of the car, I wiped down the steering wheel, gear shift, and door handle with disinfectant wipes. I headed into the guest bedroom of the house I shared with my boyfriend at the time, where I’d decided to quarantine myself until it was safe (or safer) to come into contact with people.

Time dragged in those 10 days like nothing I had ever experienced. I lacked the concentration to read more than a sentence or two, and watched the first season of Lost on DVD to whittle away at the hours. I was totally confused, but riveted, by the plot: plane crash survivors marooned on an island where nothing is what it seems.

I felt as if I were doing something wrong when I wasn’t in the guest bedroom. Every time I prowled into the kitchen for food, I wore surgical latex gloves. I always hurried back to bed to eat on paper plates with plastic utensils. Once, I went into the backyard for some sun. Our next-door neighbor called out a friendly greeting from across the low fence separating our yards. I gave her a quick wave and rushed inside.

I wiped down the sink and flushed the toilet two to three times after every use. At the end of the week, I tossed out the sheets and towels I’d used. I filled a large trash bag with radioactive waste, which I put in the garbage bin with some concern. I hoped I wasn’t endangering Oakland’s sanitation workers or causing radioactive alarms to go off at the dump.

The last few nights were especially hard. My boyfriend would come home in the evenings from work and sit on the couch, where I could see him through the glass door of the guest bedroom. I wanted desperately to go sit down next to him.

I emerged from the room after 10 days, and burst into tears when I got my first big hug. I had stayed isolated for the longest time recommended by my doctor and the pamphlets I’d received from the hospital. Still, I worried about having trace amounts of radiation inside my body for another month or so.

I had been given a paper card to carry in my wallet listing the dose and date of my treatment in case I traveled by plane and needed to explain why I was setting off the radiation alarm. I visited friends in Seattle one month after taking the pill and held my breath as I walked through security.

In the six years since my treatment, I’ve had only clean scans. I worry less about a recurrence that would send me back into radioactive isolation or how my treatment increased my risk of developing a secondary cancer.

I don’t think Kaci Hickox, the nurse in Maine, was being cavalier when she violated her quarantine to go out for a bike ride. She hasn’t shown any symptoms of Ebola, which is the only time a person is contagious, and her work in Sierra Leone demonstrates her selfless concern—at the risk of her own health—for others.

Thinking about Hickox on her bike, I’m also thinking about the 60,000 people who were diagnosed with thyroid cancer in the U.S. last year. Many of them, like me, will need to swallow that strange pill, and then wonder how to leave the hospital and where to go.