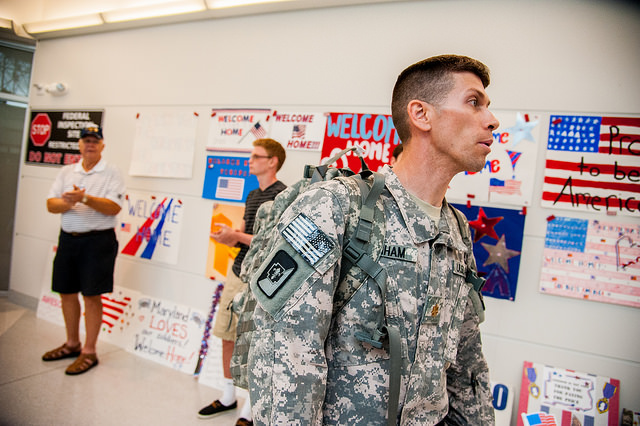 As the military drawdown in Afghanistan continues, the United States will add an additional 80,000 veterans from the Army alone to the civilian workforce. This is on top of the normal annual rate of separations from military service. On this Veterans Day, let’s think about all America’s soldiers who are receiving pink slips.

The military trains and employs more young Americans than any other single institution. They receive rigorous training from a very selective institution that only three out of 10 young Americans are even eligible to join, and they served their country under difficult circumstances that required adaptability, perseverance, teamwork, and maturity. What more could an employer want?

It would seem a lot more. Despite the many veteran employment initiatives out there—put forward by the White House, mayors’ offices, corporations, and nonprofit organizations—it’s still difficult for veterans to find work, let alone jobs that use them well. The current generation of veterans faces a higher rate of unemployment than those who have not served in the military, yet those with jobs earn more than non-veterans. The Syracuse University Institute for Veterans and Military Families offers one explanation for this paradox that applies to me and other veterans I’ve talked to: many veterans take work that is a poor fit for their knowledge, skills, ability, and experience. This leads to dissatisfaction, lower performance, and job-hopping.

If you were a helicopter mechanic in the military, then it makes sense to seek work fixing helicopters as a civilian. It’s harder for veterans whose primary military job skills don’t directly translate to the civilian workforce. As an infantry officer for the Army (who left before the current wars in Iraq and Afghanistan started), my work covered a wide range of experiences. I did everything from manage a fleet of armored vehicles to supervise the purification and distribution of water in Honduras to serve as the executive assistant of a State Department official in Bosnia-Herzegovina. I also worked on getting the first-ever emergency services agreement written and approved between my Army installation and its neighboring city in Georgia. When I completed the coursework for my doctorate degree in public health, I started applying for emergency management and disaster services positions. .

I wasn’t even getting called for job interviews, though. Rather, I’d get letters saying that I met the education and skill requirements, but didn’t have the “right” experience for a job. They were looking for specific junior job titles on my resume that I would never have unless I was to start at the lowest rung of the career ladder at 41 years old. They seemed to disregard not just applicable experience, but also my demonstrated ability to adapt and learn quickly.

I was rejected from about a dozen jobs in three months. It really stung to see that my Army experience wasn’t translating.

I was rejected from about a dozen jobs in three months. It really stung to see that my Army experience wasn’t translating. Even after working with mentors in the field to fine tune my resume and consulting with guides to help veterans find civilian work, it was hard to figure out how to present my skills and experience. The “skills translator” at www.military.com said that in civilian-speak I was trained in “message processing procedures.” Seriously? What job announcement has ever asked for that skill?

Ironically, I got my next two jobs precisely because I am a veteran. (I can’t get into too many specifics because I’m still working part-time at both of these places.) The first job dropped into my lap out of the blue from a job sector I had never considered. My employer emailed a job announcement to a group of veterans in the Los Angeles area because he had a contract with the Army and needed someone who could “speak Army.” I quickly discovered that my real role was to be a linguistic and cultural interpreter, and I became highly prized for my ability to produce PowerPoint slides and “decision-support matrices” according to Army norms.

I got my second job when a mentor introduced me to an organization that serves veterans and their families. They created a position just for me and I joined just two other veterans on staff (neither of whom was part of the leadership). The problem was they didn’t know what to do with me. During the first three months, I felt like I was in purgatory. I sat at a desk right next to the office refrigerator and microwave, and I worked on occasional tasks but had no clear sense of my role. Other employees would ask what my job was, and I found myself unable to answer that basic question because I didn’t have an official job description or direct supervisor.

Everyone in the Army has a clear task and purpose and is part of a team that requires each individual to contribute. There’s constant interaction and feedback with superiors, subordinates, and peers. Morale and cohesion matter. No one is on an island, as I felt here.

It was up to me to find or make a purpose at this job. Things finally changed for the better after I explained that I needed a project and accountability. I wanted to add value to the organization, and I didn’t have enough to do. By pressing the issue, I carved out a role for myself.

Michael Poyma, an employment specialist for the Department of Veterans Affairs (VA) in Michigan, told me he has heard many stories similar to mine. He also shared that the only time he was ever really scared in the Army was the day he left it. He now helps other veterans get hired.

Some of the most common approaches to matching veteran job seekers and employers need to be rethought, Poyma said. For example, both job seekers and employers have told Poyma that many job fairs are a waste of time for all involved. While some people find jobs this way, it’s a drop in the bucket. They also create high-pressure, high-expectation situations that can magnify disappointment.

Poyma and others have also noted that veterans gravitate in disproportionate numbers towards certain fields: government service, law enforcement, government contracting, work with veterans. These jobs allow veterans to continue working in a familiar environment related to public service. Public-sector hiring programs also build in “points” and other incentives for military service, encouraging this.

It’s easy to understand why people who come from an environment emphasizing camaraderie would want to stick together afterward. Some veterans have expressed that they feel prejudged in the civilian world due to negative stereotypes and stigmas associated with veterans, such as assumptions about widespread PTSD. They also don’t want to deal with the hassle of civilians who don’t “get” them. They also don’t feel like explaining themselves to the 99.5 percent of Americans not in uniform.

Isolation can just entrench the misunderstanding, though. It deepens the civil-military divide. This is why Chris Marvin of Got Your 6, and previously, The Mission Continues, has embarked on projects to help veterans integrate fully into the civilian world that they have rejoined. The Mission Continues puts veterans to work painting houses, tending community gardens, or mentoring kids at a wide range of community and nonprofit organizations. Got Your 6 works with the entertainment industry, corporations, and nonprofits to dispel common myths by highlighting stories where veterans are working with partners in the community (holding training sessions with teachers who have kids from military families in their classrooms, for example). Marvin and colleagues know the benefits of applying veterans’ skills and leadership experience, creating meaningful bonds, and helping veterans extend their service to the nation in news ways.

Poyma and other VA representatives have also been working to bridge the cultural gap between veterans and civilian employers in new ways. In a series of pilot seminars they are about to start, Poyma will seat potential employers and veterans on opposite sides of the room, separated by an aisle that he calls the “demilitarized zone.” He will conduct exercises to dismantle the demilitarized zone by discussing systemic barriers to employment (some of which I’ve already talked about, but others such as the cost of retraining for civilian licenses) and the negative stigmas that follow veterans. They’ll do some basic exercises highlighting their different lexicons of acronyms and jargon. They’ll also talk about shared workplace experiences to which people on both sides of the aisle can relate.

In the end, he hopes to demonstrate that veterans’ skills don’t always fit neatly into a resume or pop off the page, and his goal is to change the perceptions of employers. There is hidden value in a veteran’s resume if employers will only take the time to look.