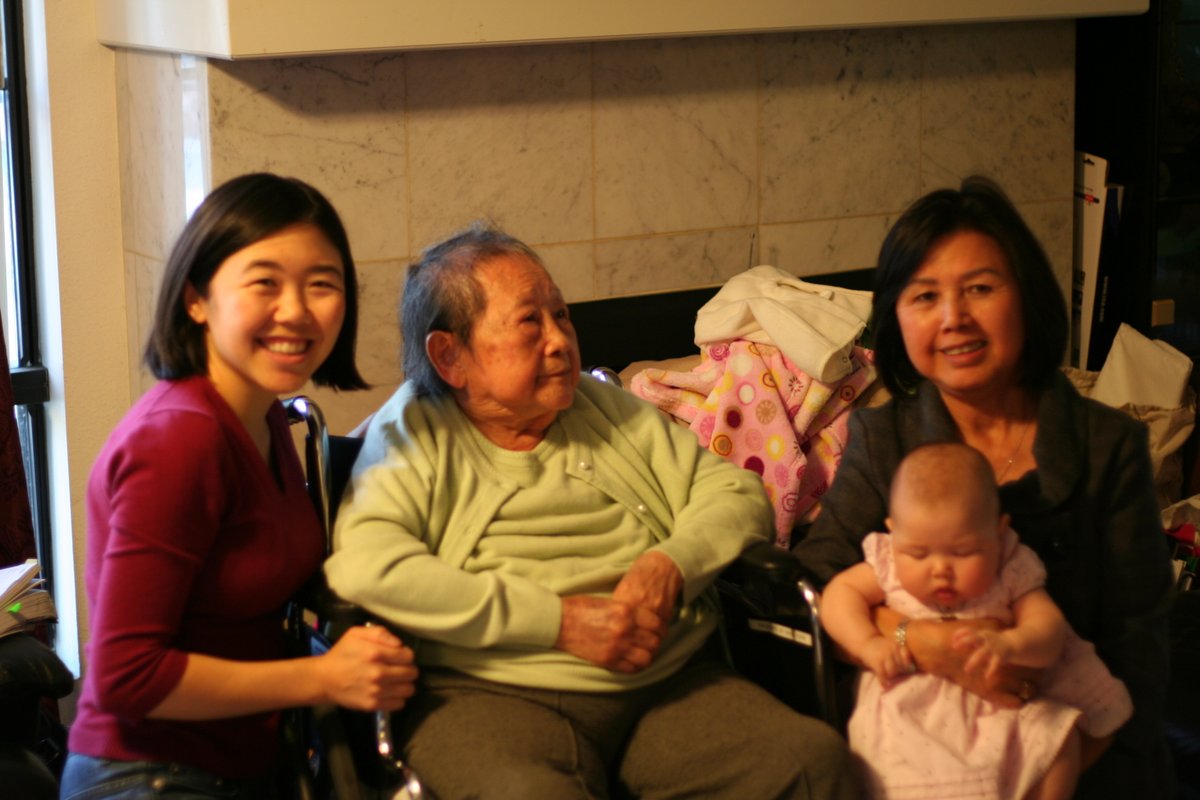 As Thanksgiving approaches, I think back to the first Thanksgiving I spent with my infant daughter three years ago, which was also the last one I spent with my grandmother. The multigenerational gathering at my childhood home in Alhambra, mixing Chinese, Vietnamese, and American traditions, is not only etched in my memory; it’s immortalized in a digital photograph.

In the photo, my mom and I are at the end and beginning of middle age. She’s holding my nearly 4-month-old daughter in her arms, while my arms rested by my 84-year-old grandma, whom we all called Popo (the Chinese word for grandmother).

The entire family doesn’t get together like this often—but Thanksgiving is a holiday when 20 or more relatives cram into my mom’s modest townhouse to eat, drink, laugh, and annoy one another. It’s a cacophony of conversation taking place in three languages (English, Cantonese Chinese, and Vietnamese). For an evening, our lives touch and intertwine, and like an infinity mirror, we can see the past and future stretched out around us. At varying points in our lives, we have alternated between the roles of caretaker and taken-care-of, sometimes a bit of both. We are constantly sliding from one end of the spectrum to another, propelled by time and love, finding equilibrium periodically, taking a breath to savor the journey and regain lost footing.

In the photo, my mom and I are at the end and beginning of middle age. She’s holding my nearly 4-month-old daughter in her arms, while my arms rested by my 84-year-old grandma.

A few months earlier, Popo had moved to an assisted living facility in San Gabriel. She had deteriorating kidneys and Alzheimer’s, so everyday activities were no longer so simple. It was an exercise in logistics for her to leave the facility, and she arrived at the townhouse that used to be her home in a wheelchair-accessible van that day.

When she was in better health just a crisp year before, she fought the wheelchair fiercely in the battle to deny her increasing frailty. By that Thanksgiving, the chair took her everywhere she went, whether it was to the other side of the room or outside to get some air. She no longer recognized the battle with frailty; one day it just nestled among us.

When Popo was still the able-bodied matriarch, she could rally everyone home with the promise of her home-cooked meal. Even well into her 70s, Popo cooked a full Thanksgiving dinner by herself, Chinese style: slow-roasted, soy sauce-basted turkey; stir-fried squid stuffed with marinated ground pork; braised abalone with shitake mushrooms and thick crunchy greens; and hearty fish maw with shark fin soup.

Once, I pointed out that perhaps we ought to forgo the shark fin because of cruel commercial harvesting practices, and that the low heat she used to cook the turkey might not comply with modern health codes. But Popo was going to cook her turkey as she damn well saw fit. In Vietnam, she supported a husband and six kids by running her own stall at the market selling fabrics, and ultimately escaped communist Vietnam with her family by paying in gold bars for their exit as boat people.

But that Thanksgiving, Popo was no longer feeding us, and the meal was a hodgepodge: My uncle tried his hand at the soy sauce-basted turkey; my mom made turkey curry with lemongrass and bay leaf; we bought spring rolls lined with a long sprig of fresh chives from an unlicensed home cook we knew; Sam Woo Restaurant prepared chow mein noodles.

As we sat down at the table, Popo had already eaten. She was on a liquid diet, fed directly into her stomach via a feeding tube. Since its insertion, she had put on a few more critical pounds on her once-round frame. She had become more alert. Her cheeks had pinkened.

But, love is food, and so my mom and her siblings took turns carefully feeding her small teaspoons of soup and porridge, coaxing her to swallow. And when Popo did manage a few spoonfuls of food, Mom gently wiped her lips and cheeks.

This was something Mom did all the time. Mom was retired, but she always woke early, cooked meals for the day for her sister and herself, and was off to Popo’s assisted living facility before 9 a.m. Mom wanted to make sure Popo was living in a way that befit the love and gratitude she felt for her. She washed Popo’s face in the morning, combed her hair to cover the bald patch on the top of her head, made sure she was turned in the bed to prevent bedsores, and rallied nurses and aides to help Popo to the bathroom so she could avoid wetting her diaper or sitting in excrement.

Mom worried that the facility lacked adequate stimulation for Popo. She saw other residents who didn’t have family parked in their wheelchairs in front of the community TV, staring blankly as Regis and Kelly bantered at 10 a.m., and as Oprah extolled the virtues of her favorite things at 3 p.m. Mom knew that when she was there, Popo would have a live person to talk to, even if the conversations were nonsensical. A few times, there would be a glimmer of comprehension, like the time Mom asked her what kind of desserts she liked.

“Great, you and I will have that tomorrow then, shall we?”

“Yes, that would be wonderful.”

At times like that, her face would be clean, her blankets wouldn’t be kicked off, and she had a friendly family member’s face to look at. Mom knew a mountain of dignity could be granted with a wipe of a napkin, comfort given with socks that she continually put back on Popo’s feet.

At Thanksgiving dinner, my daughter Hazel looked around her at all the new faces. She stared at the food we put it in our mouths. She would be an eater soon, my husband Geoff and I surmised. But at the moment, she was relying on me for her milk. And through me, she had gained critical pounds. Her frame was round, and her cheeks were pleasantly plump. I cradled her as she drank, coaxing her to swallow.

As Hazel drank, milk drops flowed down her cheeks and settled into the folds of her double chin, the crook of her little neck. I grabbed a burp cloth and wiped her lips and cheeks. Babies don’t have dignity to worry about, but I didn’t want my otherwise sweet-smelling baby to reek of old milk.

Someone else was taking care of my baby while I worked during the day, but I fretted. I worried that she was sitting in excrement. That she wasn’t being adequately stimulated or talked to enough, even with nonsense language. I worried that neither my husband nor I spent enough time with her. I wondered if her blankets were kicked off, whether her socks had stayed on. And in the evening, when I picked her up, I looked her over closely to see that she was OK.

On that Thanksgiving evening, though, there was no assisted living, no daycare. Just time and roles overlapping enough that those growing into life shared an evening with those growing out of it. Both Popo and Hazel look a little dazed by the bustle of the evening. By the next day, Popo would have forgotten and so would have Hazel. But Mom and I would remember that moment, as would the camera.