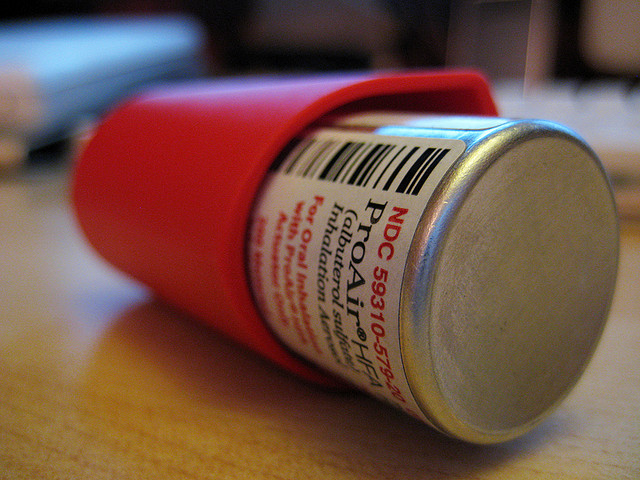 In the spring of 2013, I lost my job at a law firm. The job came with medical benefits I needed. And I wasn’t sure exactly what to do.

I grew up in Grand Terrace in San Bernardino County and have been working since I was 16 years old, often in customer service jobs. I’ve had my ups and downs at work and in life, particularly since the big recession hit. I moved back in with my parents, who live in Riverside, in 2010. But I never much worried about health insurance. I’m still young–I’m 30–and I’ve never been seriously ill or injured. I don’t have a wife or kids.

I knew that if I had nothing to stop an asthma attack, I could die. I had been borrowing the inhalers of a couple of friends to get by and they might not be around the next time an attack came on.

But in the last couple years, my chronic childhood asthma has returned with the vengeance. It’s a terrible feeling. My lungs get inflamed and constricted, and my breathing becomes labored. When I lost that job, I took some solace in the fact that my timing might be good. Obamacare would be starting soon, with sign-ups in the fall of 2013.

That didn’t mean I was stoked about the idea. I’m a libertarian, and I’m not a fan of President Obama in general, or his health plan. But I needed the care. So I went to the Covered California website, which I’d learned about from TV ads.

I found the website a little bit confusing, but I eventually figured out how to sign up for a Bronze plan. That is the cheapest kind of plan, though Bronze plans often have high deductibles. I thought I was done, but I wasn’t. Months went by and I never received a confirmation from Covered California. I wondered what had happened.

The answer came in the mail. Covered California sent me a letter saying that I wasn’t eligible to sign up for one of their plans–I didn’t make enough money. That rejection surprised me; I didn’t know that your income could be too low. But it’s true that I didn’t have a lot of money. My unemployment payments, which I hadn’t included on the form, had run out. My only income at that time was from a part-time gig playing guitar at my church.

Instead, the letter (and subsequent rejection letters) would inform me, I was eligible for Medi-Cal, California’s version of Medicaid, the federal program to cover the poor. I wasn’t happy about this, but I had no choice: I needed some coverage because of my potentially life-threatening condition. So I had to go to another website and apply for Medi-Cal, and received a package in return asking me to pick a plan within Medi-Cal. But before I could choose, I was automatically put on the Inland Empire Health Plan.

The hard part was trying to get health care with my Medi-Cal plan. Making an appointment to see a doctor who could renew my prescription for asthma drugs and inhaler was incredibly difficult. The only appointment at first was two months out. Then, the day before, the doctor’s office called to cancel. I rescheduled again for another month or so out—and the clerk called again to cancel.

At that point, I got very persistent and demanded an appointment immediately. I told them I wasn’t taking no for an answer. I knew that if I had nothing to stop an asthma attack, I could die. I had been borrowing the inhalers of a couple of friends to get by and they might not be around the next time an attack came on.

Eventually, after many calls (and after another patient canceled, creating an opening), I got an appointment at the regional health center in Riverside, just off Indiana Avenue, not far from where I live. The doctors there would take my IEHP coverage. It was an eye-opening experience. The place was jammed, and people were waiting for hours for a doctor. It took me three hours to get seen by a doctor, even though I was an easy case. My asthma didn’t need to be diagnosed, and all I really needed was an inhaler.

The outcome, however, was less than optimal. I had previously used a ProAir inhaler, which uses the drug albuterol sulfate, which has been very effective in controlling my asthma. But under the new health plan, they switched me to a different inhaler with a drug, Ventolin, that doesn’t give me the same strong relief. (It doesn’t help that the Ventolin cartridge is twice as big). I only learned about the switch at my local CVS pharmacy when I tried to fill the prescription. When I asked about the switch, I was told that I didn’t have a choice. Ventolin was what IHEP covered.

I’m not sure what I’d do if I had to continue on the Medi-Cal health plan with IHEP. The good news is: I don’t have to. I just got a full-time job and soon will be eligible for benefits again. I’m thankful I won’t have to be one of people in line again, waiting hours to be seen, mired in red tape, and worried about taking my next breath.