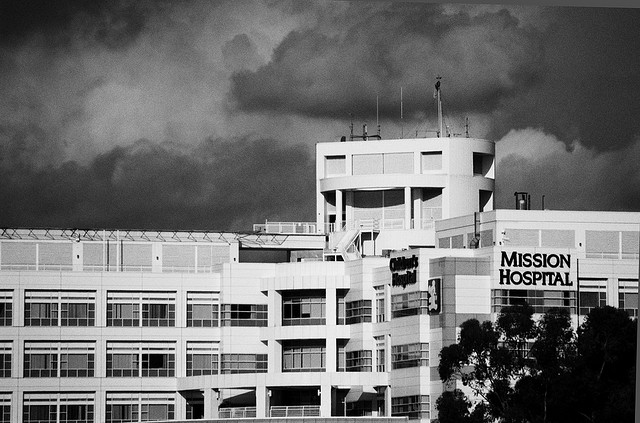 At the exact moment President-elect Barack Obama proclaimed that “change has come to America,” I stood at the foot of my husband’s bed in the cardiac ICU of Mission Hospital in Mission Viejo. I was praying. Jim lay, with a ventilator tube down his throat, recovering from open-heart surgery to replace a congenitally defective aortic valve.

I was elated—for his survival, for Obama’s victory. I looked forward to one of Obama’s major campaign promises: to provide national healthcare reform so Americans with a pre-existing condition could get insurance. Since his heart diagnosis in 2005, Jim, who probably couldn’t have found a policy as an individual because of his condition, had been covered by small-business group insurance, because his self-storage business in Banning had one other employee. But his work, and his coverage, were always subject to change.

I remained vulnerable as a freelance writer and part-time university professor who had to pay for her own health insurance. I also had had a few recent health hiccups, including a surgery to repair a herniated disk from spinal degeneration, and so I lived with the daily realization that one bit of bad health news could cause my policy to be canceled.

Tallying his medical costs, Jim said, “I take back what I said. Obamacare did help me get better.”

As it happened, the 2008 election was the first time Jim and I were bitterly divided on candidates. Jim foresaw healthcare reform as an addition to the federal deficit more worrisome than any health benefit. When I told my husband about Obama’s victory in the hospital, he grumbled, “I guess I can’t blame Obama for breaking my heart.” But, he worried that he would eventually be able to blame the president “for keeping me from getting better.”

The transition to Obamacare—at least for a 59-year-old man and a 56-year-old woman in south Orange County—wouldn’t be quite that bad. But it would be, in three big ways, far rougher and more frustrating than I’d ever dreamed.

“If you’re one of the more than 250 million Americans who already have health insurance, you will keep your health insurance—this law will only make it more secure and more affordable,” President Obama promised in 2012.

The fact that this wasn’t true would be our biggest disappointment. In November 2013, Jim learned his small-business policy would be cancelled because it didn’t comply with the new mandate to cover pediatric dentistry and maternity care. So Jim went to Covered California, the state’s health insurance exchange, to look for coverage for his employee and himself.

He found that the cost of his employee’s individual “bronze” plan monthly premiums went up 13 percent , and that his own new individual “silver” plan was also more expensive. In 2014, Jim was individually paying $82 more a month in premiums. The deductible (the amount you have to pay before the insurance company starts footing the bill) did go down—from $5,000 to $2,000 for each individual insured. But if you added together 12 months of premiums, the deductible, and the new policy’s out-of-pocket maximums, we were potentially on the hook for $13,260, rather than the $11,024 from 2013, if Jim got very sick. Around this time, Jim was diagnosed with prostate cancer, so the threat of high medical bills was real.

The individual plan I had with Blue Cross was cancelled, too. The bronze plan I got at Covered California raised my monthly premium payment from $301 to $422, with a $5,000 deductible. The maximum I might be responsible for if I got really sick went from $8,612 to $11,314.

2) We learned patience, but we couldn’t keep our doctors.

The only way to decrease the cost of our premiums was to get the subsidy offered by the federal government to lower- and middle-income people. And the only way to get the subsidy was by getting insurance through Covered California. But contacting Covered California, especially by phone, was maddening. The elevator music they played on hold became our winter soundtrack.

After a few more calls, Jim drove to a pop-up Covered California shop in the Laguna Hills Mall on January 15, 2014, the deadline for adding coverage. He hoped to avoid website computer glitches and phone hang-ups. All we had were verbal assurances, which were not enough to see the cardiologist and a urologist at the insurance-negotiated rate. Receptionists at the doctors’ offices said we could pay cash: $150 per visit for the urologist, $203 for the cardiologist, plus lab and treatment expenses.

On January 22, we finally got our enrollment number and made our first payment to Blue Cross so we could start seeing doctors. Jim finally went to his cardiologist on February 10, only to discover the doctor had left Blue Cross.

Thus began a session of musical chairs as we tried to match our insurance to the doctors we wanted to see before the music stopped. This was one time we had the advantage over an employer-sponsored health plan, which has only one open enrollment period in a year. Due to the start-up problems with state insurance exchanges, the deadline for Affordable Care Act insurance kept being pushed back, allowing us to change coverage twice.

We canceled Blue Cross and enrolled in Blue Shield so Jim could see his urologist. Then, when the urologist’s office said they didn’t accept Blue Shield patients enrolled through the state exchange, we canceled California Covered Blue Shield and bought directly from the insurance company, even though that meant foregoing the subsidies.

But the urologist wouldn’t accept our new Blue Shield plan, even though the Blue Shield website said he did. Jim’s regular dermatologist left Blue Shield, too.

Eventually, we requested records and sought new doctors. Although we read frequent reports of patients unable to find physicians willing to take new patients, in our case Jim found a new urologist he liked better than the old.

3) The Affordable Care Act saved us money this year, but it didn’t alleviate our concerns about obtaining affordable medical care.

Jim treated his prostate cancer with radiation, and received his recommended echocardiogram and MRI. So in 2014, we paid the maximum out-of-pocket expense and the insurance company covered the rest. Tallying his medical costs, Jim said, “I take back what I said. Obamacare did help me get better.”

I’m well below my annual deductible. I baby my back, neck, knees, and hip degeneration with regular walking, yoga, and acupuncture. I’ve benefitted from regular $28 acupuncture treatments, something that wasn’t covered in my old plan. But my licensed acupuncturist hasn’t received any reimbursement yet. It’s also harder for her to make a living; the insurance company cut her pay by 25 percent.

What Obamacare hasn’t eliminated is worry: We’re deeply concerned about our ability to get quality medical care from doctors we trust. The day may soon come when we can’t afford the plans our doctors accept, or we’ll have to wait hours to seen. Will the best doctors flock to a cash-only model? How long can a good doctor be satisfied with the $39.75 the insurance company paid her for my annual check up a few months ago?

We had thought that our work and businesses had paid us enough to live on in these older years, but we’re discovering we didn’t account for such dramatic increases in health care costs. Medical expenses already gobble up 20 percent of our income. In 2015, if we keep the same plans, our premiums will rise $95 a month. We have no choice to opt out of the required pediatric dentistry or maternity coverage we’ll never use, so we’ll eventually have to settle for less generous policies, with higher deductibles and out-of-pocket maximums. My husband isn’t required by law to insure his one employee, though he feels it’s the right thing to do. As costs continue to rise, we may have direct him to buy his own health insurance at his own cost.

We’ve already started the dance of enrollment all over again and are having a hard time finding partners. As I write this, the “Find a Provider” link on the Covered California website offers 2014 health providers, but not 2015, even though we’re shopping for 2015 insurance policies. Ditto Blue Shield. Administrators at our medical group won’t say yet if they’ll remain with Blue Shield. At least this year we think we know the steps to the dance. Let the music begin.