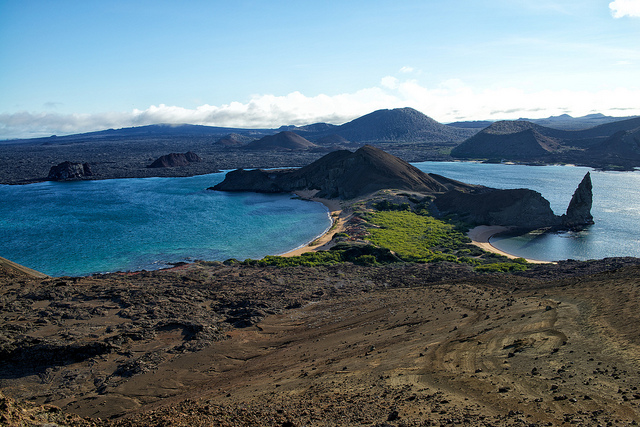 If you are fortunate enough to visit, the Galapagos is the sort of place that stays with you forever. In the 10 years since I first went there, I have written two books about these islands and hardly a day has gone by when I haven’t thought about them. I still visit them often in my imagination. But where do I go?

In the Galapagos, there are around 70 dedicated sites accessible to visitors, neat trails that weave through this extraordinary landscape. I have been to some of them, but the most precious spots in the Galapagos are those that it’s not possible to see. For it is the 97 percent of their land mass that is out-of-bounds to visitors and the huge marine protected area around them that makes these islands so special. It is these places that I visit most often in my mind, remote sites I know I will never see.

Take Beagle Crater on the west coast of Isabela, for instance—a huge ashen caldera, the cauldron-like center of a collapsed volcano. As its name suggests, Beagle Crater has a connection with the voyage of HMS Beagle and Charles Darwin, the Galapagos’ most celebrated visitor. Darwin in Galapagos, the excellent book by K. Thalia Grant and Gregory B. Estes, got me excited about Beagle Crater—especially their description of the “overpoweringly hot” October day in 1835 when Darwin set out to explore this huge crater of volcanic ash consolidated into billions of tiny shot-like pellets. Having fought against the sliding sides of the volcano to make his way to its rim, Darwin was drawn to the clear, blue lake pooled at its center. “I hurried down the cindery slope, and choked with dust eagerly tasted the water—but to my sorrow I found it salt as brine,” he wrote in his Journal of Researches.

The most precious spots in the Galapagos are those that it’s not possible to see. For it is the 97 percent of their land mass that is out-of-bounds to visitors and the huge marine protected area around them that makes these islands so special.

Apart from this image, there is another reason why I like Beagle Crater. The lake that disappointed Darwin—Beagle Lake—contains several islands, which Grant and Estes describe as “a lonely archipelago of six islets of its own; a model Galapagos in a miniature sea.” It may have been this very scene, they speculate, that inspired Darwin to refer to the Galapagos as “a world within itself.” I am captivated by this image and love that Grant and Estes named the islands after Darwin’s fellow Beagle hands: King, Covington, Fuller, Chaffers, Bynoe, and Sulivan.

Another Galapagos place I like to go to—at least in my imagination—is at the northern edge of the Galapagos Marine Reserve, around 155 miles north of Puerto Ayora and over a mile below the surface. The Galapagos Rift is a crack in the earth’s crust that runs from east to west, separating the Cocos Plate to the north and the Nazca Plate to the south. In the 1970s, marine geologists dropped a probe overboard there to get an idea of what was going on in that dark and distant world. The photographs they brought back revealed the existence of hydrothermal vents, weird chimney-like structures discharging plumes of superhot water from beneath the ocean floor. In 1977, two men took a look with their own eyes, onboard the deep-sea submersible Alvin. When they focused the craft’s beams on the craggy floor of the Galapagos Rift, they shone light on a monstrous abundance of giant life forms: mussels, crabs, oysters, limpets, and tubeworms growing up to 10 feet long.

Since then, hydrothermal vents like those in the Galapagos have been discovered at every submarine spot where one tectonic plate butts up against another. In recent years, many scientists have come to view these chemically charged oceanic outpourings as absolutely central to the origin of organic molecules, metabolic pathways, and—ultimately—life.

But of all the Galapagos places I go to in my imagination, I’ve probably been most often to the northerly island of Pinta, or Lonesome George’s island. Lonesome George was a giant tortoise discovered on Pinta in 1971, brought to the central island of Santa Cruz in 1972, where he lived in captivity until his death in 2012. In that time, he became famous as the sole-surviving member of his species, “the world’s rarest living creature” and a conservation icon. He was also the subject of my first book, a precious reptilian muse who helped me navigate the challenges of conservation in the Galapagos and beyond.

In researching that book, I delved into the diaries of dozens of pirates and whalers who visited Pinta to kill its giant tortoises for food. I talked to scientists and conservationists who have been to the island and learned of their bold efforts to restore the Pinta landscape to something of its former glory. Pinta, for me, is a symbol of both destruction and restoration. Its story reveals so much about the Galapagos: its turbulent human history, troubled present, and uncertain future.

As much as I would love to climb Pinta’s volcano and contemplate life on George’s island, I know that I can’t. But this is as it should be. Places like the Beagle Crater, the Galapagos Rift, and Pinta give me hope that we can contain the influence of humans on the natural history of this archipelago.

The Galapagos is truly unique. Scientists recognize around 4,000 species in the islands. This is not a great number of species, yet almost half are unique to the islands. They’re made in the Galapagos, a product of the splendid isolation this archipelago has enjoyed for millions of years. Today, the pressures on the Galapagos are immense, notably the presence of some 30,000 residents and over 200,000 annual visitors. Yet so much of the Galapagos benefits from serious protection and as long as there are wild, relatively untouched places like Beagle Crater, the Galapagos Rift and Pinta, I will still have a purpose. I will still have hope.