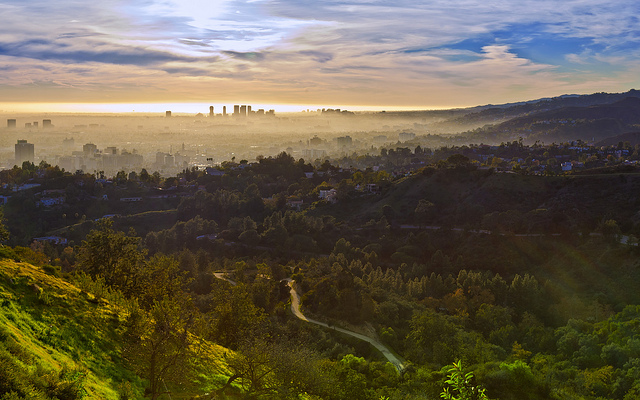 If there’s anything in Los Angeles that remains inexpensive and underrated, it’s Griffith Park.

I’ve experienced a few area codes around here. After growing up in the 818, high schooling from 310, working in 213, shackin’ up at 323, and eventually getting my own place in 626, the majesty of L.A. living had left me nonplussed. But then in April 2001, far too late in life, I visited Griffith Park for the first time, and learned to love life in Los Angeles.

At 4,210 acres, Griffith is the nation’s largest municipal park with an urban wilderness area. The park would be significantly larger, had Griffith J. Griffith not frittered away so much of his ancestral pueblo to settle gambling debts. Playing host to four golf courses, three trains, an observatory, the Greek Theater, the zoo, the old zoo, a museum, pony rides, equestrian trails, semi-pro baseball, academy soccer, Walt Disney’s go-to merry-go-round, a Wolfgang Puck restaurant, and Shane’s inspiration, Griffith is more regional excursion center than mere park. Tell your San Francisco friends to look down their noses at that.

The topography is diverse, breezes sublime, and little known fact: Magic hour—that last hour of beautiful light before sunset that cinematographers adore—occurs here all year-round. Each day spent near Griffith beckons a hike, or a bike ride. Big sky perspective is easily re-discovered along its trails. When tragedy struck September 11th, this shattered Angeleno found his salvation in deep meditation undertaken all over its hills.

So in May 2007, while plumes of forest fire smoke spiraled upward all around from the worst blaze to ever hit Griffith Park, my wife and I bought a house a few hundred yards from the park. And I’m unafraid to confess, since the very first time my drive home from work was punctuated by that glorious Park (capital “P”) flanking my left, I have never once uttered a disparaging word about life in L.A.

The area’s steep and narrow winding streets have proven less than conducive to children at play, and the Los Feliz Boulevard traffic on weekends can be unnerving. Still, there is a locals-only shortcut to get around said traffic. And Griffith Park remains an overall wonderful place to live, experience nature, and send your kids away to school.

If you’re into celebrity spotting, the park’s perimeter ranks second to none. On one insider’s drive, you pass by homes belonging to Katy Perry, Colin Farrell, Megan Fox, Flea, Natalie Portman, George Lopez, and, rumor has it, Mad Men’s John Hamm along with his pet falcon. There are the creators of The Sopranos and Pretty Little Liars, the bassist from No Doubt, manager of the Beastie Boys, and hair care magnate Chaz Dean. To be clear, this is all just on one street.

Of course, with celebrity comes scandal, and scandal runs deep in Griffith Park. The Prohibition-era house bombing of an L.A. Times publisher happened here, as well as a Manson Family murder. Charlie Chaplin—no stranger to scandal—lived up in the Oaks, as did Madonna.

To be clear, one cannot fully appreciate Griffith Park without accessing the neighborhood that surrounds it. The architecture is world-class. You’ve got Richard Williams’ landmark links-style designs, Frank Lloyd Wright’s Hollyhock and Ennis Brown houses. And, for natural splendor, Griffith Park is tough to beat. There’s Dante’s Peak, Blake’s Grove, Eucalyptus Alley, Pacquiao’s Trail, and the Ferndell trail (that feels like a slalom course), to name a few.

Los Feliz, or, ‘The Happys,’ was Beverly Hills before Douglas Fairbanks and Mary Pickford introduced their Pickfair estate in the real Beverly Hills, initiating an era of westward celebration migration. But it was the 1996 movie Swingers that made us famous. The swing dance mecca The Derby has long since met its demise, along with swing dancing. But jazz singers Marty & Elayne’s trademarked brand of vintage swing continues to hold sway at the Dresden restaurant. We have multiple Scientology centers and a Chabad—ya know, for balance. And the irreverent Upright Citizens Brigade, an improv theater and school, is housed nearby to disrupt said balance. This town is money, and it knows it.

Los Feliz Village commands more than its fair share of legitimate top L.A. bites and diversions. There is always a compelling new bistro coming online, and three or four stellar spots I can’t wait for an excuse to return to. In the concentrated area between Los Feliz Boulevard to the north, south to Hollywood, from Vermont on the west, over to Hillhurst, you have the Vista, one of America’s first suburban movie theaters, and the Los Feliz 3 (where this author’s father took this author’s mother on their first date 50-plus years ago) as well as Yuca’s, the nation’s lone James Beard Award-winning taco stand.

People think L.A. is flat, and overly concrete. And if you reside on the Westside, then—apart from the moving pedestrian walkway that is Runyon Canyon—I’m afraid this is true. But Griffith Park is not flat and plenty grassy, a literal and figurative breath of fresh air. Just please don’t share this with any Pasadena riffraff.