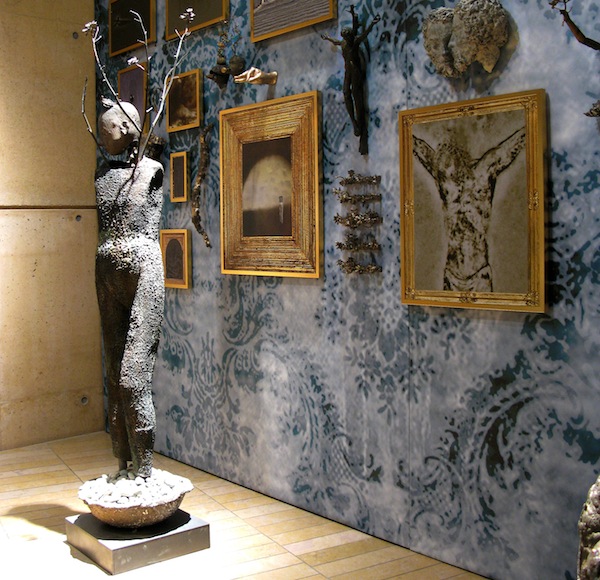 Does art with pagan references belong in a Catholic Church? Two exhibitions on view in L.A. this winter are separated by almost 400 years—but both answer the question with a resounding yes. They also offer a rare opportunity to explore the rich tradition of the Church’s patronage of artists—and remind Christians and non-Christians alike how art can inspire devotion, prayer, and meditation.

“Spectacular Rubens: Triumph of the Eucharist” at the Getty Center features four tapestries created for a Catholic convent in Madrid in the 1620s. And concurrently, for “Vessels and Channels,” L.A.-based artist Simon Toparovsky—who was commissioned by Our Lady of the Angels Cathedral to create a monumental bronze crucifix for the main altar in 2000—has created temporary installations in three of the cathedral’s side chapels.

Peter Paul Rubens, a 17th-century painter best known for large cycles of paintings filled with figures in motion, may appear to have little in common with a contemporary artist like Toparovsky, who is known for narrative sculpture. But both artists are superb storytellers whose work is simultaneously narrative and symbolic, mingling religious literature, including Catholic doctrine and Biblical stories, with history and mythology of pagan, non-Christian origins. These are the kinds of connections that we—as art historians and educators who give tours of museums in the greater L.A. area—love to find.

Both artists are superb storytellers whose work is simultaneously narrative and symbolic, mingling religious literature, including Catholic doctrine and Biblical stories, with history and mythology of pagan, non-Christian origins.

Both artists draw inspirations from a wide range of sources beyond the Church. European artists in the 17th century were aware of ancient artifacts because of excavations taking place in Italy. Rubens, one of the most educated artists working in Europe, was deeply knowledgeable about ancient Roman art, and spent eight years in Rome as a young man when archaeology was a new area of study. Toparovsky benefits from a much wider, contemporary worldview that draws inspiration from Greek, Roman, and New World mythology, as well as Persian poetry, and the writing of Joseph Campbell.

In the 1620s, Rubens was commissioned by Infanta Isabel Clara Eugenia, daughter of the King of the Spain and the Governor-General of the Southern Netherlands, to create a cycle of 20 tapestries celebrating the Transubstantiation (whereby the bread and wine used in the Eucharist become the blood and body of Christ). With this monumental project, Rubens engaged in the conflict then raging between Catholicism and Protestantism by producing an elegant, expensive piece of Baroque propaganda. By the time the tapestries were commissioned, Catholic Spain was proclaiming its authority and celebrating the Catholic Church after a 12-year truce between the Southern Netherlands and Spain following the Eighty Years’ War. Rubens was the perfect image-maker to assert triumphant ideals in support of Spain and Catholicism. 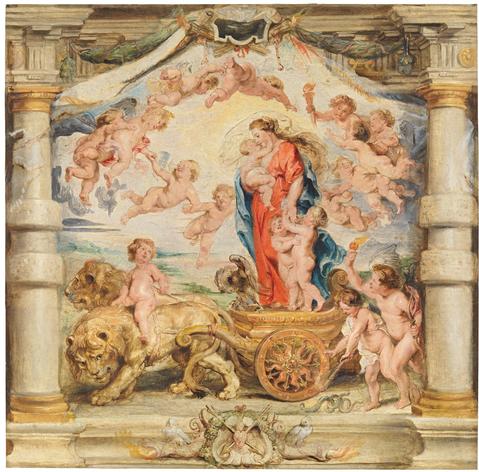 To create the Eucharist tapestries, the artist first worked out his designs in small oil paintings that were approved by his patron. Six of these paintings, and four of the final movie screen-sized tapestries, are featured in the Getty exhibition.

Rubens freely borrowed ideas and imagery from the Vatican art collection’s Greek and Roman sculptures, as well as paintings and frescoes by Michelangelo, and by Raphael, to tell a Christian story for his Catholic patrons.

In the tapestry “Triumph of Divine Love,” a red-robed woman holding a chubby, naked baby stands on a golden chariot pulled by lions as angels flutter around her. It’s a triumphal procession evocative of pagan gods and military heroes in ancient Rome enhancing a Christian image of divine love. Even ornithology, the study of birds that took on a new, scientific rigor in Rubens’ time, becomes a source for Christian imagery. In an easily overlooked section of this tapestry, a pelican nourishes its young with blood from a self-inflicted wound, thereby updating a medieval metaphor for Jesus’ sacrifice for mankind.

Toparovsky, like Rubens, has spent extended time in Italy. His work draws on the whole history of Italian art—pagan, secular, and Christian—and the study of Baroque masters, including Rubens himself. Toparovsky is inspired by masterpieces from the past as he seeks to create work that transcends temporal boundaries to examine the universal human desire to create art. Visual immersion guides Toparovsky’s creative process.

For “Vessels and Channels,” Toparovsky draws from history and mythology to explore narratives of the human spirit that transcend a single theme or devotion to one religion.

In one chapel, a sketch of the Christ figure and a small bronze crucifix appear in the midst of sculptural figures of the pagan Roman goddesses Fortuna and Diana, and the martyred Christian Saint Sebastian. Mixing these divinities with saints of the Christian tradition invites viewers to speculate about the meaning of art found cocooned deep within the sacred space of the cathedral. 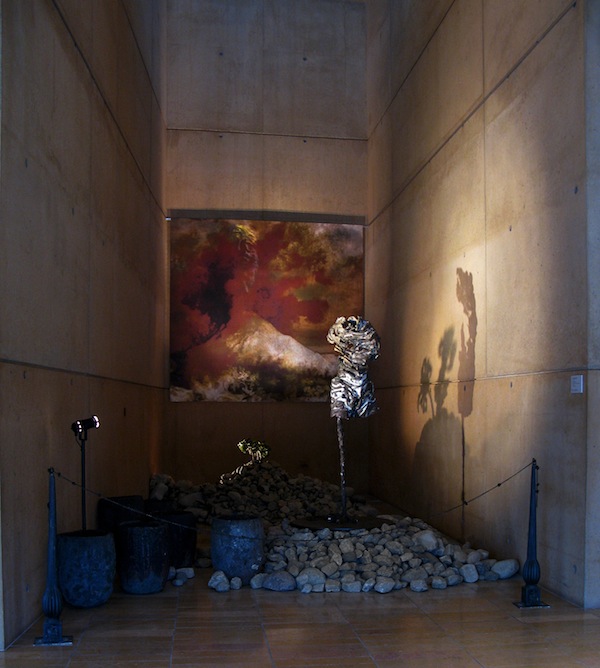 The first chapel installation is viewed through a grated window set into a wall of greenery. Inside, we see a garden of spiny succulents cast in bronze and leading to a closed, elevator-like door. Two bronze animals struggle to leap out from the green hedge. Are they standing guard to keep us out of the garden, or are they trying to escape to join our world? If we did manage to get in and climb the prickly path, where would that elevator take us?

The next chapel is filled with freestanding sculptural figures, as well as two-dimensional and three-dimensional pieces mounted on the walls, onto which shadows are cast. Here the visitor encounters a rich mix of Christian, pagan, and esoteric imagery mingled so that they transcend geographic, historical, or religious boundaries.

And in the final chapel, a purely pagan story unfolds. A chain bars the entry, beyond which a rotating bronze torso with a single bird-leg casts a shadow on the wall. Deeper within the space, an image of a volcanic eruption throws a crimson light throughout the chapel. Six crucibles, used at foundries to cast the bronze sculptures, are clustered in the chapel and give us a backstage glimpse into the artist’s workshop. This is the Prometheus chapel—named for the Greek mythological character who stole fire from the gods and gave it to humans, resulting in his eternal punishment. The Prometheus myth is powerful: His punishment has been viewed by some Christians as a foreshadowing of the crucifixion.

Toparovsky’s work creates an expansive vision of history by integrating Catholicism into stories from older belief systems that are not always Christian. Living in an era of more pronounced religious divisiveness, Rubens worked the other way around, making pagan images and traditions subservient to the belief system of the Catholic Church. What ties these two artists together is the patronage of a 2,000-year-old church that still inspires by offering a sacred space in which to show work for contemplation of the divine.