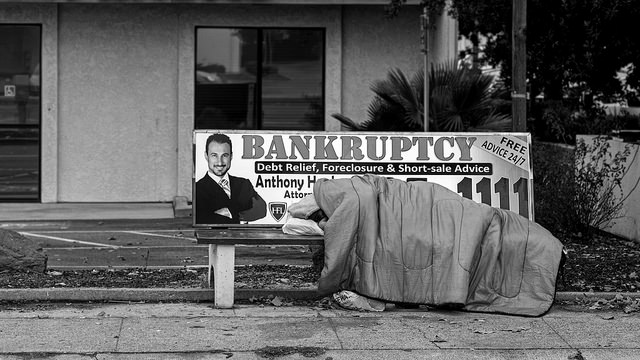 In the mythology of ancient Greece, Odysseus, King of Ithaca, disguises himself as a beggar to gain an advantage over his enemies. In Shakespeare’s King Lear, a nobleman masquerading as a vagabond helps shift the monarch’s sympathies.

The past year marked a new trend in the electoral cycle: politicians “going native,” spending the night in homeless shelters or sleeping on the streets of Skid Row. Toss in digital technology and social media to document and promote these undercover exploits, and the experiences go viral. In this new age of digital selfies and homegrown YouTube videos, it’s no surprise that some politicians made their own “reality-videos” during the campaign season.

Connecticut Senator Chris Murphy shadowed a homeless man around the streets of New Haven, from a methadone clinic to soup kitchens. In Milwaukee, County Supervisor Michael Mayo spent the night in a cardboard box at a local downtown park. U.S. Senator Tim Scott, from South Carolina, went on a “listening tour,” mopping floors in a burrito shop, and volunteering at a Goodwill store in downtown Greenville.

There is something more than a little manipulative about the whole enterprise—the inner city is more or less hijacked to serve as stage set for politicians who are suddenly “down with the people.” At least Scott, a Republican, is honest about these staged events. He admitted that he is a “salesman” not interested in changing his own views, but in convincing voters that the GOP does have something to offer, even to his fellow (and usually Democrat-leaning) African Americans.

The marquee player on the 2014 “barrio tour” was California gubernatorial candidate Neel Kashkari, the former Wall Street banker, who spent a full week last summer undercover on the streets of Fresno, California.

Not all such stunts work. The marquee player on the 2014 “barrio tour” was California gubernatorial candidate Neel Kashkari, the former Wall Street banker, who spent a full week last summer undercover on the streets of Fresno, California. Trailing incumbent Gov. Jerry Brown by more than 20 percent in the polls (and eventually losing by a similar margin), the millionaire tried to shake up the campaign with his homeless odyssey, which he dubbed “Is California Back?” in a widely circulated campaign video.

Arriving in Fresno by Greyhound bus, with “a change of clothes and $40 in his pocket,” Kashkari wandered the streets downtown in search of jobs. In handheld video clips we see him inquiring about work in local markets, appliance stores, and repair yards.

Kashkari launched his reality excursion under somewhat suspect premises. To begin, he chose the relatively isolated, San Joaquin Valley agro-industrial city of Fresno for his homeless trek. If the Newport Beach resident wanted to understand the homeless crisis in California, why did he not hop a bus to nearby Los Angeles, which has the nation’s second largest homeless population (over 50,000)? Or, travel straight up the coast to San Francisco, California’s second worst urban region for homelessness, where more than 10,000 city dwellers lack permanent shelter. From there, he might have taken the train just across the bay to Oakland, another California city with a homelessness crisis.

Los Angeles, San Francisco, and Oakland weren’t the choice for a visit by candidate Kashkari. These cities have something else in common: They are Democratic strongholds. Fresno, on the other hand, is a city with a GOP mayor. Coincidence? I think not.

Yet, even Fresno’s GOP mayor was not entirely happy with Kashkari’s uninvited visit. Just after Kashkari unveiled what he’d done, Mayor Ashley Swearengin sarcastically told the press that if Kashkari had approached her, she would have been happy to show him new low-income housing and other efforts underway to address Fresno’s homeless problem, which, he, of course, never references in his video.

The Kashkari team had its own game plan. A few days after returning from the streets of Fresno, Kashkari’s opinion essay “Brother Can you Spare a Job?” appeared in the Wall Street Journal. Next, his campaign released the 10-minute “Is California Back?” video, featuring the millionaire in disguise, sleeping on a park bench near the Fresno courthouse, washing his clothes in a local laundry, and frantically applying for jobs he would, of course, not get in his short stay.

In the end, these “barrio tours” leave one with an empty feeling. In Kashkari’s film “Is California Back?”, we see inner city storefronts, vacant parking lots, abandoned buildings near train tracks, the glaring lights on the inside of convenience stores—images that are shimmering, floating fragments of a place, but not tethered to a larger story about why Fresno is worth saving, or how (other than with more “jobs”).

Missing was any sense that Kashkari really cared about downtown Fresno as a place worth saving, or understood the policy strategies needed to revive it. While sleeping outdoors, surely he must have noticed the air pollution, which the EPA rates as worst in the state? Never mentioned. Fleeting cameos may have fit his campaign theme, but his team squandered a chance to address the larger question of how governments can help rebuild inner cities like Fresno.

Many of these political undercover operations have failed in the same way. By zeroing in on one malady (homelessness in one video, food stamps in another) these stunts obscure the most promising approaches to social problems—comprehensive ones.

Comprehensive strategies attack community poverty from the bottom up, and in all its myriad dimensions— affordable housing construction, better transit, upgraded schools, jobs tied to local agriculture, food production, renewable energy, and green buildings, as well as community policing, crime prevention, and other public health improvements. Taken together, multi-faceted approaches, anchored around public-private partnerships and tied to local ecology and culture, will make a difference on the rundown streets of barrios and skid rows.

Kashkari and other politicians deserve credit for venturing out of their comfort zones. Yet what the Kashkari video revealed was a slightly dazed and tired protagonist not merely in disguise, but also a bit lost amidst the searing heat and grit of Fresno’s back alleys and Skid Row streets. Maybe that’s because, at the end of the day, he was.