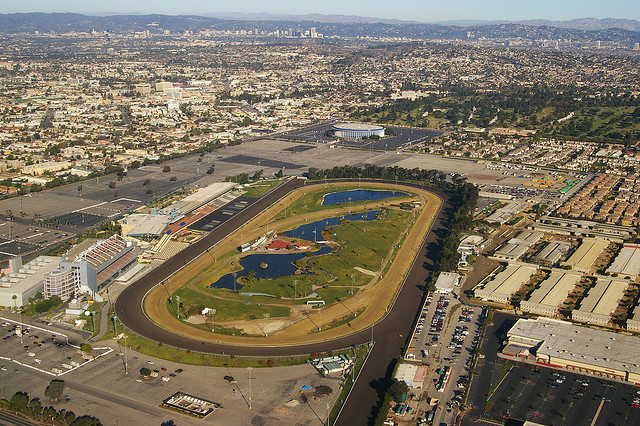 To live in Inglewood is to have people make assumptions about you. Recently, people have been making assumptions about what a new pro football stadium, proposed by the owner of the NFL’s Rams, would mean for us. One such assumption now prevalent in the media is that we’ll embrace it, because we’re assumed to be economically desperate: Inglewood is “over 90 percent minority” (The Los Angeles Times), “a largely low-income suburb” (the U.K.’s The Independent), or a bad “neighborhood” (a characterization in movies going back to 1991’s Grand Canyon).

That proximity to familiar landmarks is one reason why my family located here in 1974, before I was born. My parents researched many communities, and after not being allowed to view a house in Santa Monica—because they were black—they had a choice between a house in Carson or Inglewood. They chose Inglewood.

In the 1990s, if you were black and lived south of the 10 Freeway (whether in Inglewood, Compton, Crenshaw, or Watts), you were said to live in “South Central,” even if Central Avenue was on the other side of town.

“The Forum is here, they have a hotel, and it’s right by the airport,” my dad often said when asked how he and my mom came to own a home in Inglewood. There was also considerable pride: Morningside Park was one of the first black middle-class neighborhoods in L.A., a destination beginning in the ’60s for people moving out of what was then called South Central and now is known as South L.A.

Growing up, I’m not sure I appreciated what a special place Inglewood was. I didn’t realize that not all black kids in Los Angeles enjoyed my carefree life: I rode my bike, did chores for a $10 weekly allowance, and danced around to cheesy ’80s tunes on the weekend. Only after going away to college at UC Riverside did I learn the extent to which people viewed Inglewood as scary.

In the 1990s, if you were black and lived south of the 10 Freeway (whether in Inglewood, Compton, Crenshaw, or Watts), you were said to live in “South Central,” even if Central Avenue was on the other side of town. The regional term was code for “black,” and living in a black neighborhood in Los Angeles County meant you lived where all the scary black gang members lived.

There was no allowance for diversity in blackness. Blackness was considered—and still is, to many—a personality type, like being humorous or empathetic. In high school in Inglewood, I was Teka, “the weird poet girl with all kinds of fun ideas whose mom is the prettiest mom on the block.” In college, I was “the black girl from South Central.”

During my freshman year in the dorms, my roommate saw a picture of my parents and, shocked, said, “You have a dad!?” I guess black people don’t have dads. I stopped saying I was from Inglewood, and said I was from around the airport. When people assumed Westchester, I just never bothered to correct them.

“You speak very well,” people would say. I was not used to being patronized and complimented for talking like a typical L.A. kid. I did not know how to respond in any way, so I remained silent. And when I did speak, I remained vague.

That is Inglewood’s story in a way. It doesn’t matter that our community is filled with writers and artists. (I’m one of them—I came back after college and started a newspaper.) Nor does it matter that the black people in Inglewood’s Morningside Park and Century Heights—which border the Forum—are homeowners and among the most highly educated African-American populations in California. What matters is that we’re south of the 10, and so we must be in need.

The reality is that my neighbors aren’t happy about the prospect of living so close to an NFL stadium. That shouldn’t be surprising when one considers the traffic, noise, pollution, hassles, and history of communities next to big sports facilities. We’re also not happy about nonstop building in Inglewood–the stadium is part of a large redevelopment of the Hollywood Park property–with no concern for urban planning or the environment. We moved here because of the character of the community, and to live in a residential neighborhood with single-family homes where kids can ride their bikes.

We also moved to Morningside Park because it was small and our neighbors said “hello” to each other. We liked that my mom—who never learned to drive the L.A. freeways—could easily take her Datsun to get groceries, then pick me up from the local Catholic school.

My hope is that, with attention fixed on Inglewood, my neighborhood will finally be recognized as a gem, and that the assumptions people make about Inglewood will float away, and people will see it as it truly is. Inglewood is an economically diverse Latino and black city, with some good and some bad. It is also a place that reliably delivered the American dream to my parents. Here, a couple with typical jobs can afford to buy a house, raise a kid or two, and go on a few vacations.

Progress and change are not bad, but what good will come from building a football stadium that mostly sits empty? Corporatization of a city under the guise of concern for the community is neither future-minded nor progressive.

It’s the same old tale of “progress” being defined as black people being left with nothing more than the insecurity of jobs as security guards for the rich. Instead of protecting what’s here today, communities are maligned so that the city can “move forward” and bulldoze whatever must be bulldozed to create touristy entertainment. Because if it was black, it couldn’t have been much of anything, right?

It is long past time for people to stop making assumptions about Inglewood.