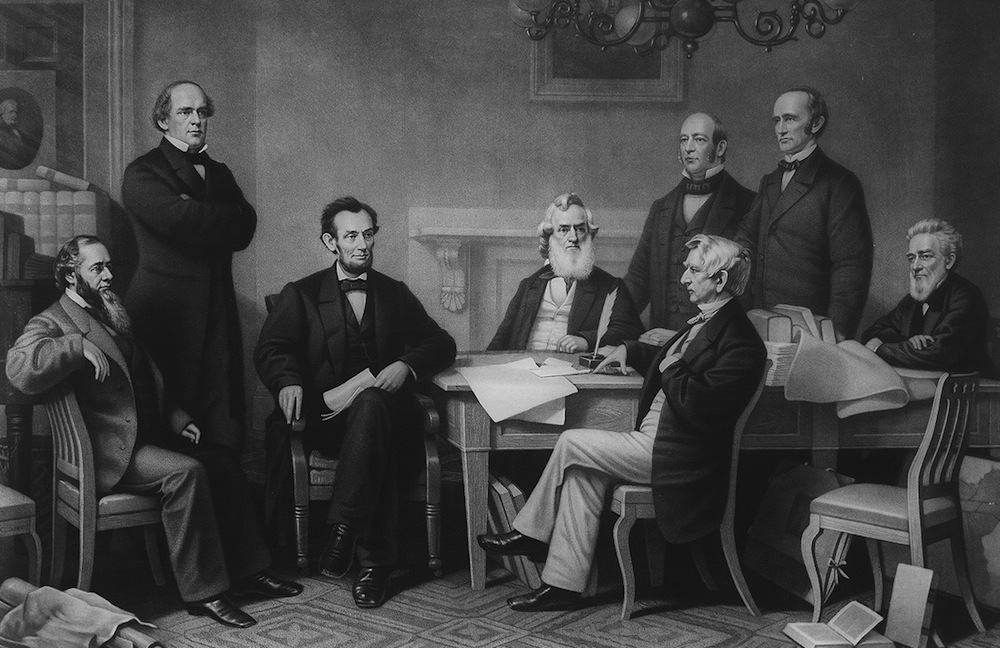 The American Civil War was, among other things, an epic inheritance quarrel, with both sides claiming to be the legitimate heirs to the nation’s founding principles as articulated in the Declaration of Independence. The Confederacy, of course, saw itself beating back the forces of tyranny much as Washington and Jefferson had asserted the sovereignty of the individual states from that of an “undemocratic” distant power. The Union, meanwhile, sought to preserve the republic forged by independence and fulfill the Declaration’s assertion of “inalienable” human rights bestowed by our “Creator,” for whom “all men are created equal.”

At the time, many considered this statement disingenuous, given that Lincoln had long been a vocal opponent of slavery. Did he really expect mothers to continue to watch their boys die for something so abstract, cerebral, and unstable as the American idea of a continental union resting on first principles? The inkstand Lincoln used in signing the Emancipation Proclamation

“The Union is unnatural,” wrote the novelist Nathaniel Hawthorne at the outset of the war, “a scheme of man, not an ordinance of God. … How can you feel a heart’s love for a mere political arrangement?” Hawthorne certainly didn’t, nor did his emotions run strong for abolition. He considered the whole enterprise to end slavery to be foolhardy and meaningless, the ideal of emancipation one of “misty” philanthropy, the war itself a venture where young men (the term infantry comes from infant, French for “youth”) were dying for old men’s stale ideals. As the killing continued, many Northerners seemed to look at the war in the same way.

Then, only a month after his bold assertion about the preeminence of “union,” Lincoln made a move that appeared to contradict his expressed flexibility on the fate of slavery. On September 22, 1862, he issued the preliminary Emancipation Proclamation, challenging the belligerent states of the South to put down their arms, rejoin the Union, and accept a gradual, compensated end to slavery. He gave them 100 days to comply or face the immediate emancipation of their slave populations on January 1. It was an extraordinary gamble. With one bold gesture, Lincoln had changed the calculus of the war, making its mission much more explicitly about the future of slavery, and he had done so even though there were no polls to tell him that the people of the North would back him. Nor was he certain that the army he led would accept it either. In an audacious challenge to accepted military practice, Lincoln was targeting not only the rebel army of the South, but the civil society, its institutions, and its private property as well.

Interestingly, Lincoln himself stewed over what action could be considered more “American.” A man of the law, he understood that the Constitution protected slavery. He justified his action by asserting that the freeing of the slaves was a tactic of war, and that he, as commander in chief, could thus wield such authority without Congressional sanction. For that reason, the proclamation would not apply to the border slave states that had stayed in the Union; there, ironically, slavery could continue in force. But even if Lincoln could justify his move as an extraordinary wartime measure, the constitutional protection of slavery would outlast any conflict—even a victorious one. No matter what the Declaration of Independence had to say about equality, Lincoln knew full well that it was merely a revolutionary manifesto. The Constitution, with its endorsement of slavery, was the law of the land.

Throughout his life, Lincoln had grappled with this dissonance between the Declaration and the Constitution. He had asserted that equality was the “sheet anchor of American republicanism” and, in another brilliant image, borrowed from the book of Proverbs, that the Declaration was the “apple of gold” framed by the Constitution’s “picture of silver.” The picture (think frame here) was made for the apple, “not the apple for the picture.” To Lincoln, then, the nation had begun not in 1789, with the ratification of the Constitution, but in 1776 with the move to cut ties with England and begin the world anew. This was a radical idea—the “nation” being formed in spirit before it was formed in law—but Lincoln needed to convince the people of it to make the case for equality. Indeed, it was this that he referred to when, in November 1863, he famously spoke of “four score and seven years ago” at the Union cemetery at Gettysburg, and when he subsequently urged the Congress to pass the 13th Amendment ending slavery.

In the days after the issuance of the preliminary Emancipation Proclamation, Lincoln appeared to have doubts about the wisdom of his act. The midterm elections were a setback for his party; after a qualified victory at Antietam, the Union army resumed what seemed to be a trajectory of defeat, a dire situation compounded by a lack of reliable military leaders. When Lincoln delivered his annual address to Congress in December, he barely mentioned the proclamation, prompting the abolitionist leader Frederick Douglass and others to worry that he had lost the courage to go through with it, to flatly confront the South and claim for this war the mantle of equality.

They were wrong. On the morning of January 1, 1863, after three hours of greeting guests, Lincoln retreated to the second floor of the White House, where the final version of the proclamation awaited him. Lincoln dipped his pen in the ink and then hesitated. Looking around at the others gathered in the room, he said that he had never felt “more certain that I was doing right,” yet he was worried that his fatigue might lend a fragility to his signature that later generations would see as doubt. Then, emboldened by this reflection, he put the finishing touch on the document that freed 4 million.