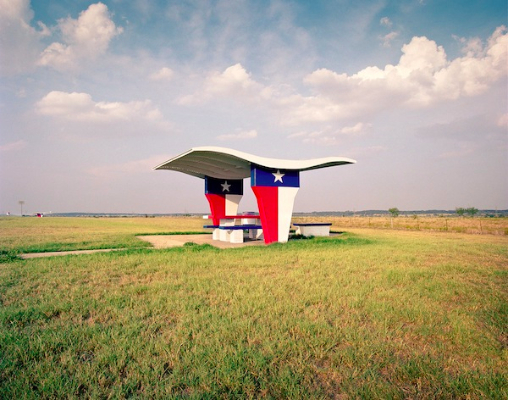 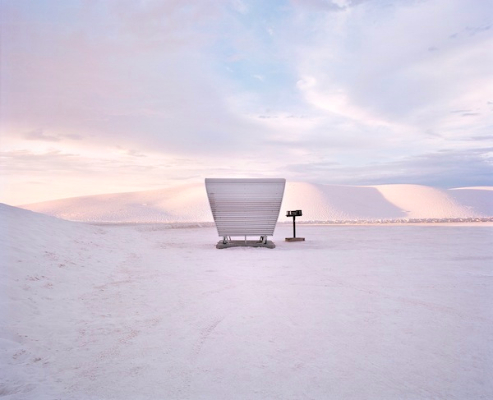 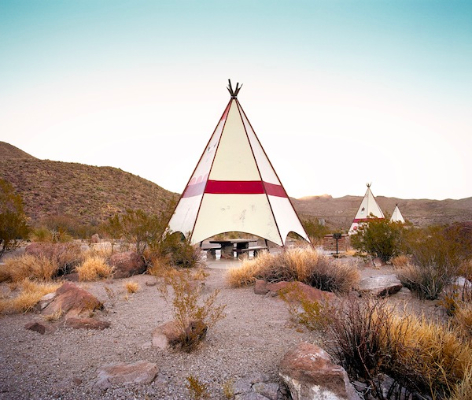 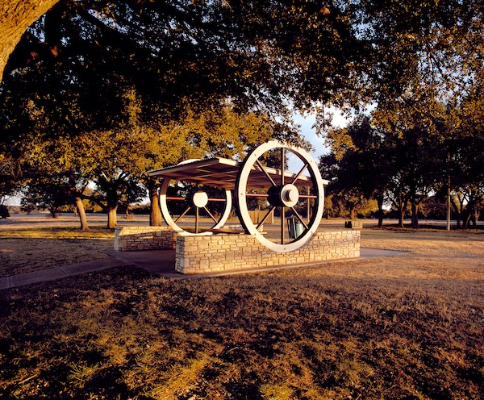 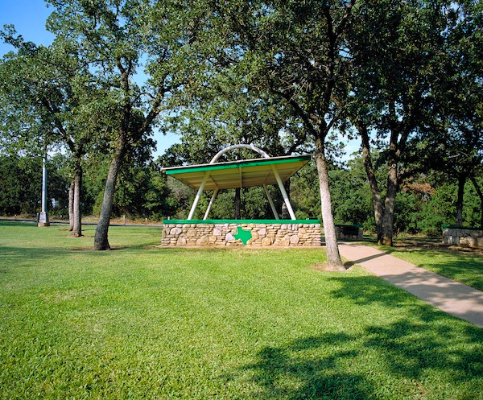 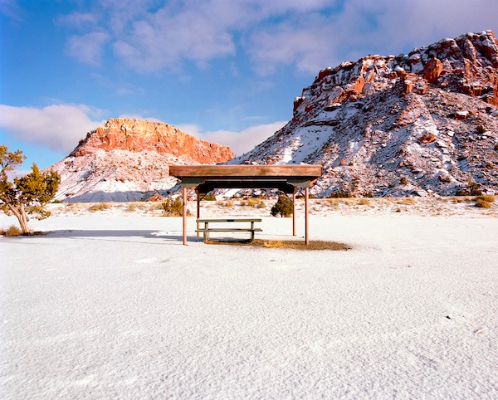 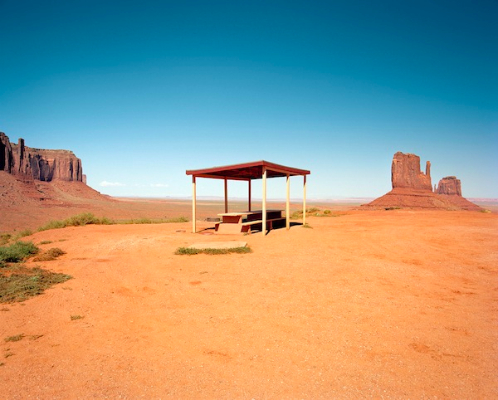 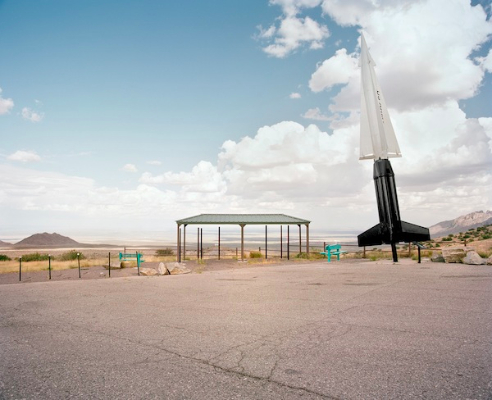 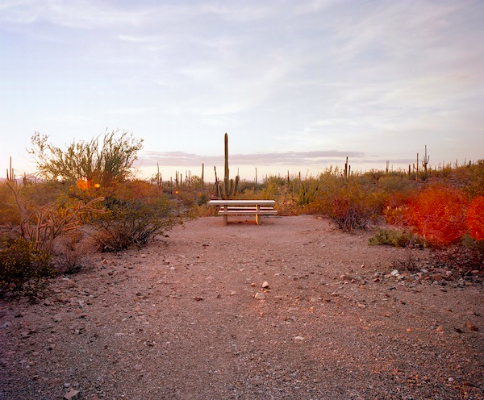 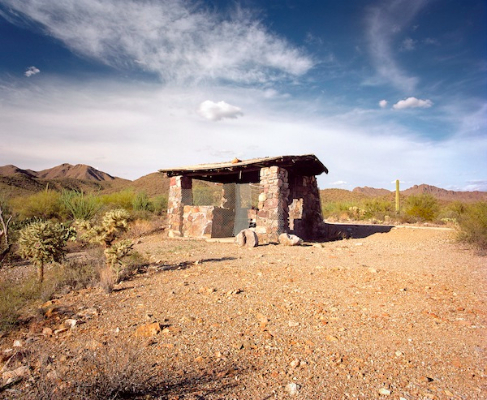 Near Thackerville, Oklahoma, I-35 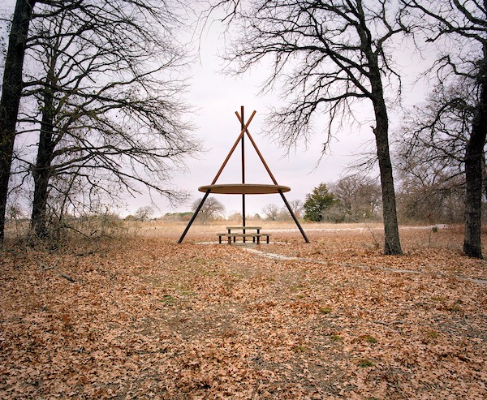 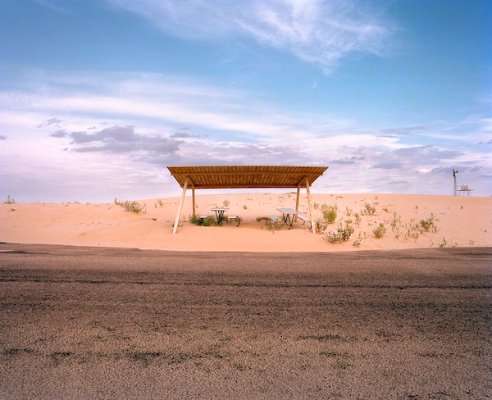 A picnic table shadowed by an enormous teepee; a covered structure in the middle of a vast red desert; a shady spot under the cover of a gigantic wagon wheel. These places once teemed with traveling families, but the kids, dogs, and picnic baskets are now long gone.

For the last five years, Ryann Ford has driven through Texas, New Mexico, and other parts of the West, seeking out and photographing rest stops on quiet highways and in parks for a project called “The Last Stop: Vanishing Relics of the American Roadside.”

What she found was often simple but charming: a table in a tidy clearing, some shade, a picturesque view. Some of these places are still in operation, and some have since been demolished—but most are simply abandoned.

Ford’s interest in rest stops began when she spotted many along the road in the process of moving from L.A. to Austin in 2007. A drive along Texas’ back roads a few years later for commercial assignments inspired a deeper dive.

She did a quick online search and turned up images of all kinds of quirky rest stops, including one in Flower Mound, Texas, that felt quintessentially Texan—painted to resemble the state’s flag and with a roofline in the shape of a longhorn.

Ford made the trip to the rest stop just outside of Fort Worth and got the shot. Not long after, it was torn down.

This became an increasingly common story. In 2009, as states cut their budgets, “these little rest stops were the first things to go,” said Ford. It could cost several thousand dollars a month to mow grass, collect trash, and clean up graffiti. Then there was the matter of crime. Many abandoned rest stops, like the one in Flower Mound, became hotbeds of drug dealing and prostitution.

But it wasn’t always that way. Capturing this vanishing slice of American history—and a different era of travel—is Ford’s primary goal.

“Nowadays travel is all about getting there fast and easy,” she said. We travel by plane or mega-highway, stopping only for the restroom or to grab a bite at a drive-through. For most people today, the words “rest stop” conjure a McDonald’s and a gas station—a cookie cutter place with no personality where you pull off the road out of necessity.

Back when rest stops were first built in the early ’50s and through the next few decades, “it was more about the journey than the destination,” said Ford. “People took time to go on road trips: They packed picnic lunches and pulled over to spend time in nature with their families. And these rest stops were always in pretty places with scenic overlooks and trees.”

Over the last five years, Ford has made weeklong road trips every few months, usually accompanied by her mother. They had an especially memorable experience at White Sands National Monument in New Mexico in 2009.

They arrived at the site after driving through a desert thunderstorm. The park was cleared out; 20 identical picnic tables were spaced out in regular intervals, just waiting for everyone to come back. “It’s like another world with white pristine sand for miles,” said Ford.

Ford’s forthcoming book, which she hopes to see published in December 2015, will include about 100 of her photos and a foreword describing the history of the rest stop. She’s also planning to include the GPS coordinates of each site that’s still standing—in the hopes that readers will be inspired to pack a picnic lunch and take a nice, old-fashioned road trip.

To learn more about “The Last Stop: Vanishing Relics of the American Roadside,” visit http://ryannford.com/.