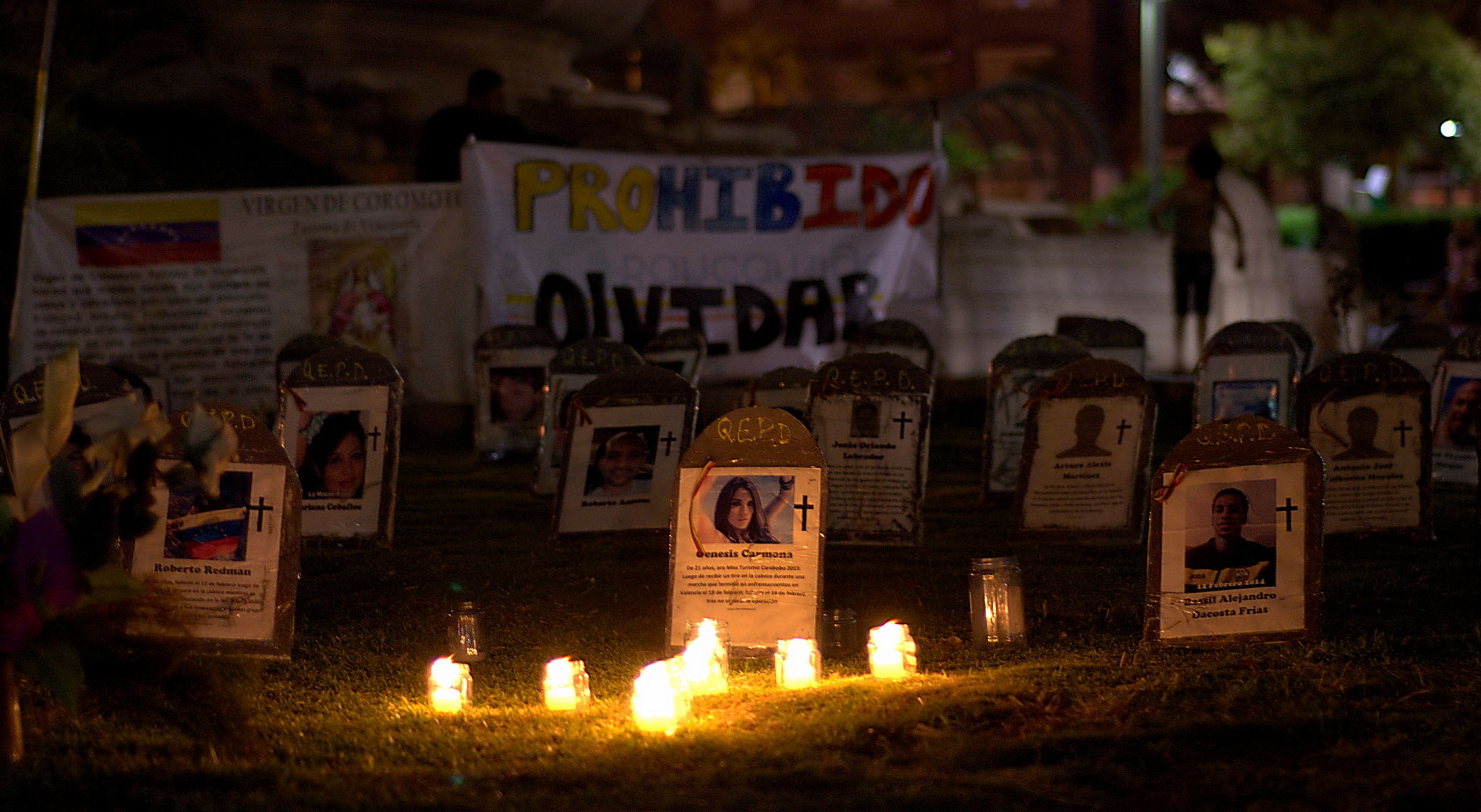 Elected leaders across the hemisphere gathered to condemn and possibly sanction a neighboring president who closed down independent media and harassed political opponents.

The actions of Peru’s former president Alberto Fujimori back then pale in comparison to the recent steps taken by Venezuelan President Nicolás Maduro. Partisan distribution of resources to local governments? Seizure of independent media critical of the government? The packing of the judicial system and the electoral commission with political supporters? In Venezuela those are so yesterday. All those things occurred in Venezuela under (President for Life, naturally) Hugo Chávez, with barely a peep from a regional community that once committed itself to the defense of representative democracy.


In Caracas these days, it’s hard to tell whether the next protest will be about the lack of freedom or the lack of toilet paper.

The idea, 15 years ago, at the turn of the century, was that Latin America had finally arrived at the democratic promised land. By the time the Berlin Wall fell, all countries in the region, except Cuba, had elected governments. After decades of being a test lab for dictatorships, democracy and the rule of law prevailed throughout the region. And if these accomplishments remained wobbly in places, that was all the more reason for countries to commit to one another, and to their peoples, that there would be no backsliding. As in Europe, the idea was that democracy should be a prerequisite to membership in the hemispheric community.

And so the happy convergence of democracy and post-Cold War trust brought a series of multilateral commitments to defend and protect democratic regimes. The most important of these was in 1991 when the Organization of American States (OAS) committed its 34 member nations to collective measures in case there was an interruption in the democratic order (read: coup). The provision—later incorporated in the OAS charter—threatened expulsion from the multilateral organization and voluntary sanctions by member countries should a democratic government be overthrown. The provision was soon invoked to respond to events in Haiti, Peru, Guatemala, and Paraguay, with OAS successfully rolling back coup attempts or military governments.

Those interventions were all before 2000, when Peru’s Fujimori demonstrated that democracy could be eroded from within, by an elected executive, and that the existing OAS tools weren’t sufficient to address that type of threat. Since he had attempted his notorious “auto-coup” in 1995 (which the OAS acted swiftly to condemn and reverse), Fujimori had asserted greater political control over the judiciary, closing down opposition media and in 2000 running for an unconstitutional third term, in an electoral environment rigged in his favor. Soon thereafter, he was forced out of office as a result of a bribery scandal.

In the aftermath of the Fujimori saga, and recognizing that military coups are hardly the only threat to democracy, the OAS member states developed the Inter-American Democratic Charter. Signed on September 11, 2001—yes, on that September 11—in Lima, the Charter reiterated the OAS commitment to democracy, but adopted a more expansive view of what constitutes a threat to democracy. The charter spells out the checks and balances that define democracy: not just free and fair elections, but also human rights, freedom of expression, respect for the rule of law, independent media, and the separation of powers.

And that’s where it stayed—on paper, in Lima. The Democratic Charter hasn’t been collectively invoked since. Not when Chávez or Maduro closed down independent television stations. Not when the presidency packed the judiciary with political allies (amending the rules for confirmation to require just a majority of votes in the National Assembly instead of the constitutional two-thirds). Not when the Venezuelan government stripped opposition mayors of their powers and created a parallel police force. Not when the government used public resources to tilt elections in its favor. And not even when it rounded up political opponents and jailed them as it did last year and just last month.

Latin America has reverted to an earlier time. The diplomatic imperative seems to be for each country to mind its own business, never mind what a neighboring regime may be doing to its own population. In retrospect, it’s become easier to appreciate how exceptional the turn of the century moment was for Latin America, in terms of the cohesion and optimism around a shared democratic vision.

Two trends explain the retreat. The first was the growing political diversity in the region. If the 1990s were an era of political and economic convergence, with most major countries in the region agreeing on a shared definition of what a democracy means, the 2000s were an era of divergence, where countries adopted very different governance and economic models. Chávez in Venezuela and allies elsewhere adopted a more socialistic, autocratic interpretation of what a democracy looks like. Favorable global economic conditions and the election of more nationalistic governments in Brazil, Argentina, and Ecuador also brought a newfound diplomatic assertiveness in a region increasingly divided between nations that relied on a U.S.-oriented trade network and those that saw it as a competitive threat.

The result has been a raft of new regional multilateral organizations, such as the Union of South American Nations (Unsaur) and Community of Latin American and Caribbean States (CELAC) that pointedly sought to exclude the United States. While leaving the U.S. out may have been understandable as an effort to resolve issues regionally, these new groupings have prioritized national sovereignty over a defense of popular sovereignty within each nation. That commitment to national sovereignty and, with it, non-interventionism has undermined the regional norms and procedures intended to defend human and democratic rights.

The second factor underlying the post-9/11 retreat from a democratic compact may have been the Bush administration up north, perceived to be a throwback to the overreaching imperio. The march to war in Iraq (which involved a lot of arm-twisting of Latin nations to join the coalition), the public focus on regime change in Cuba, and the initial endorsement of what turned out to be a coup in 2002 in Venezuela seemed a return to a time when the United States felt it could meddle at will in the region. The reaction throughout Latin America, both among well-meaning democracy advocates and among regimes eager to redefine democracy to suit their own purposes, was a diminished appetite for collective action to safeguard the rights of others. The effort had become tainted by association.

Meanwhile, back in Venezuela, the Maduro government seems emboldened to brazenly arrest anyone who dares speak out in opposition, including the mayor of Caracas. Only a few elected leaders, such as President Juan Manuel Santos of Colombia, have raised their voices to express concern.

And things there may be about to get a lot worse. After all, Maduro’s deceased predecessor systematically dismantled all checks and balances to executive power in booming economic times, riding a surge in oil prices. Now the Maduro regime is desperately holding onto power amid an economic implosion brought on from years of economic mismanagement and a steep decline of oil prices. In Caracas these days, it’s hard to tell whether the next protest will be about the lack of freedom or the lack of toilet paper. Maduro’s government will be forced to cut more consumer subsidies or declare bankruptcy or cut off all access to foreign currency, moves that will only worsen living conditions further. Expect more unrest and repression to follow.

The failure of the region to act in Venezuela has had ripple effects elsewhere, encouraging autocratic presidents in countries like Ecuador and Nicaragua to indulge their worst instincts. It’s difficult to imagine how the region can return to the European-like collective commitment to democracy of the 1990s.

Could earlier collective action by the regional community have averted a train wreck in Venezuela? Arguably, it could have moderated the government and avoided the crisis the country now confronts, though we may never know. Perhaps Venezuela would have persisted in going its own way, and been excommunicated by a region committed to the rule of law.

But even if a more coordinated, earlier response to defend human rights and democratic institutions had not saved Venezuela, it would have preserved those norms and rights of popular sovereignty for citizens in other countries. The ideal that democracy is a defining right of all Americans throughout the hemisphere has been lost, at least for this generation.