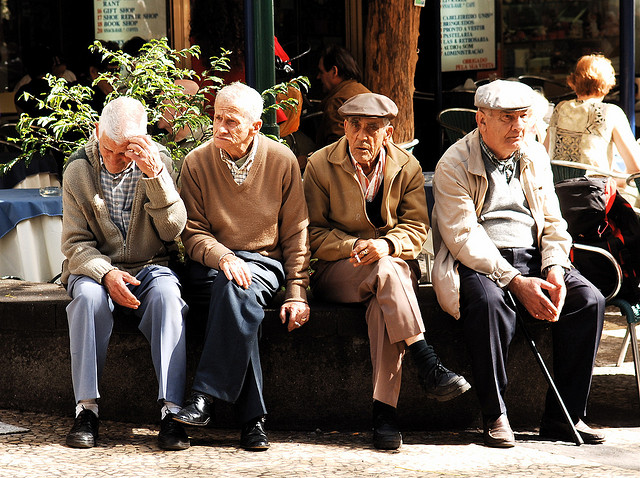 Florida Governor Rick Scott is traveling to California this weekend with designs on stealing away some of our state’s businesses. So why don’t we return the favor by developing our own plans to steal away some of Florida’s greatest assets—old people?

Californians like to think of this state as a place defined by endless youth and growing diversity. But the biggest transformation in California is the breathtaking speed with which our population is aging. So instead of just measuring ourselves against oil-rich Texas or Wall Street-dependent New York, we should be focusing more on Florida as our competitor.

While Californians 65 years or older represent just 12 percent of the state’s population today (a figure slightly below the national average and well below Florida’s rate of 19 percent), the number of 65-plus seniors is projected to nearly double, representing 20 percent of the population by 2030. That rate of growth is roughly the equivalent of adding one new Rossmoor—the 9,000-strong senior community in Walnut Creek—twice a month for the next 15 years.

But even that may not be enough geezers to meet our needs. Other sources of new Californians are drying up—immigration is flat, the birth rate has dropped below replacement, and too many young families are leaving the state because of the high costs of living. Our state’s budget system—by limiting education spending and relentlessly forcing cuts and higher tuition at our universities—and our politics— which are increasingly dominated by older voters—all but preclude investments to attract more young people. So if California wants to grow, and find new buyers for our homes and new shoppers for our retail corridors, our best option may be to convince more people to spend their golden years in the Golden State.

U.S. economic surveys show that the fastest-growing American regions are the most successful in attracting retirees. Yes, seniors come with high health care costs. But federal programs cover many of those costs. And, California already must make hundreds of billions of dollars in public and private investments just to serve our own aging population. So why not make a virtue of necessity?

Yet California has built very little of the senior-oriented infrastructure that makes Florida such a magnet for the old. Instead, we have spent the last generation cutting back, in the name of budget austerity, services upon which they depend—from health and housing to culture and transportation. Too many California communities are chasing the same younger, highly educated, and creative people with the same menu of attractions—bike paths, downtown lofts, any development that can be labeled “sustainable”—even though the young are declining as a share of the state’s population. Meanwhile, the state has too narrowly focused its self-promotion on attracting trade and tourism rather than luring snowbound seniors from Back East.
Here’s one example of our narrow vision when it comes to the possibilities of the old: The biggest California debate involving seniors right now is over proposed legislation to make it easier for them to end their lives when they’re terminally ill.

State Senator Carol Liu, one of the few state leaders focused on the opportunities and challenges of a rapidly aging California, told me that when she put forward a bill to require adult bicycle riders to wear helmets, she was inundated with media calls and public questions. After her special legislation committee put forward a comprehensive report and ambitious legislative package on aging, she said, “No one is paying attention.”

That report, from the state Senate’s Select Committee on Aging and Long-Term Care, is worth reading. In more than 200 pages, it recounts yet another state governance mess—California’s collective failure to plan properly for old age. Programs on long-term care are scattered across six different state departments. There are no clear safety and access standards, and precious little data, for home-based and community-based senior services. Despite model senior centers around the state—in reporting this column, I heard a lot about the West Senior Wellness Center in San Diego—there is little effort to build statewide on such successes.

Liu’s report is at its most depressing when it quotes decades of previous reports that offered the same warnings—and produced little progress. This new report offers 30 recommendations, the headliner being the appointment of a California aging czar. It also suggests more forceful advocacy for seniors and framing aging investment as a women’s issue, since women live longer and thus represent large majorities of the senior population.

California may never be able to compete with Florida on income taxes (ours are high, theirs are nonexistent), but our climate is more comfortable, and, as anyone who has visited the Coachella Valley knows, we have lots of things to offer seniors. (Maybe some Californian could pitch Governor Scott, who will be termed out of office in Florida shortly after his 66th birthday in 2018, on buying in La Quinta.)

With the cost of living so high in coastal California, it would make sense to focus senior recruiting efforts on lower-cost communities inland. UCLA Anderson School of Management economist Jerry Nickelsburg has argued that the Central Valley would have much to gain by focusing on seniors. That would require governments and private companies to build improved health care facilities and train more people to work in professions serving seniors. The good news is that those are low-risk investments that would raise education levels and produce badly needed jobs.

Liu’s report notes that California’s seniors will be highly diverse. And therein lies more opportunity. According to the United Nations, the worldwide population of older persons—age 60 or over—is expected to more than double to 2 billion by 2050. If California can develop senior infrastructure that can serve people of many cultures and languages, California could pitch itself as a global destination for retirees.