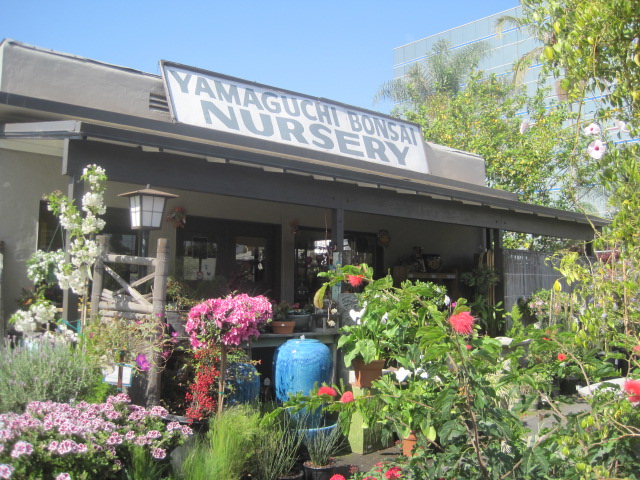 My introduction to the West Los Angeles neighborhood my parents called “So-ta-ru” came in the 1970s when we visited relatives there. I still am unclear on exactly how we are related—it was definitely on my mother’s side and it may go back to some village in Hiroshima. But for my immigrant mother, these relatives were her only blood relatives in the United States.

The first thing I noticed was how much cooler it was in West L.A. than back home in the Pasadena foothills. The Westside front yards had more “poodling” of green shrubs trimmed like floating clouds, a sure sign of the handiwork of a Japanese gardener. Among these Westside relatives, both the grandfather, Yamatoku-san, and the male head of the household, Mr. Yamatoku, were gardeners, just like my father.

A wooden board with a grid for the Japanese game of “go” was carried out into the living room. The grandfather and my father—in silence aside for an occasional grunt, sucking of cheeks, and click of the go disc on the board—would play for hours. Both Yamatoku men have since passed; the last time I saw the younger man alive was in a hospital bed in Santa Monica after he collapsed on a customer’s lawn; he worked until the very end.

On April 1, this area we used to visit—“So-ta-ru” around Sawtelle Boulevard between Santa Monica and Pico boulevards—got a city sign officially christening it “Sawtelle Japantown.” I was thrilled to hear about the recognition, although it came a bit too late. Many of the beloved Japanese-American businesses—certain stores, nurseries, and the auto garage—have gone, replaced by chain stores and expensive housing. 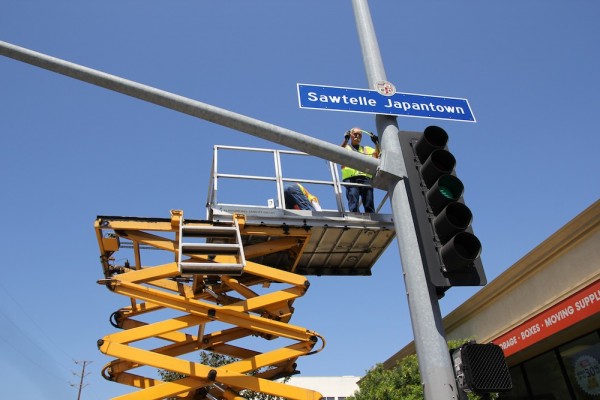 The official Sawtelle Japantown being installed by city workers on April 1, 2015.

But that blue sign with the seal of Los Angeles officially adds another government-designated Japantown on the map. It gives a nod to this Japanese-American settlement in the Los Angeles area and reminds us of the other clusters of Japanese-American residents around L.A., each with their own character if not official recognition.

The Japanese-American community around Sawtelle dates to the 1910s, before that part of town was annexed by the city of Los Angeles. Japanese-Americans were drawn to the Westside by the beach proximity, large estates that needed garden service, and fertile land for growing flower seedlings and cucumbers. But covenants restricted where Japanese-Americans could live in Los Angeles, and the 1.48-square mile of Sawtelle, like many Japantowns around California, was not covered by the covenants. Like Uptown (present-day Koreatown) and Hollywood, it was a magnet for gardeners.

Sawtelle at one time boasted eight boardinghouses for Japanese men, essentially serving as “gardeners’ colleges,” according to scholar Ronald Tsukashima. Men new to the country and the trade could apprentice with a more experienced mentor. If a housewife was in search for a gardener, all she had to do was call the boardinghouse, and she would have any number of choices at her disposal. The veterans’ hospital and the new campus of UCLA had a lot of lawns and foliage that needed tending. 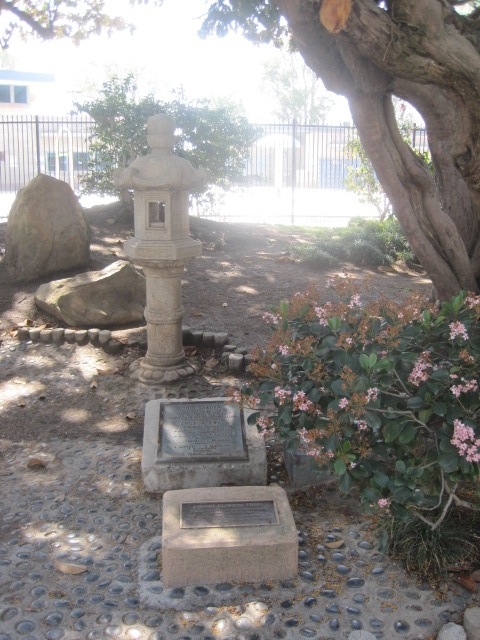 Most old-time Westsiders I meet wax poetic about the neighborhood’s nurseries. The pots full of seasonal plants and even bonsai. According to the website Preserving California’s Japantowns, Sawtelle had 26 nurseries and flower shops operated by Issei (Japanese immigrants to America) and Nisei (those born in the U.S. to Japanese immigrant parents) in 1941. Only one of those pre-war businesses exists today under the name Hashimoto Nursery. Another very well-known business, Yamaguchi Bonsai, which started in 1949, sits on the same side of the street.
But Sawtelle hasn’t been encased in amber. Today it’s full of young Asian-American professionals looking down at their mobile devices to confirm lunch or dinner at Tsujita LA Artisan Noodle. Korean tofu houses, boba cafes, and fusion restaurants make their homes next to Japanese chain grocery stores and sushi restaurants.

The 2010 Census shows that the tract west of Sawtelle was 17 percent Japanese and Japanese-American, including people of mixed race. The California average is 1 percent.

Eric Nakamura used to go to Japanese school, Buddhist temple, daycare, and the YMCA in the area. When Giant Robot—his photocopied ‘zine celebrating Japanese pop culture and punk music—took off, he opened his first store on Sawtelle on 2001. Two years later, he launched an art gallery across the street. Giant Robot now hosts art and craft shows, public readings and even video game nights. Eric told me he might have accidentally coined the “Little Osaka” nickname for Sawtelle; he regrets that an offhand remark to a reporter in the 2000s—when food trucks made the area a particular hot destination—would be so quickly accepted and spread by outsiders. Residents who had lived in the area for a substantial time (a group that included himself) were never attached to it.

And Eric does feel it’s more important to honor the people in the area because they are the ones who have helped Sawtelle preserve its Japanese and Japanese-American heart. As more and more of the physical neighborhood touchstones began to disappear in recent decades, Randy Sakamoto, a son of a gardener, and Jack Fujimoto, a former city college president and the author of Sawtelle: West Los Angeles’s Japantown, wanted to grab hold of what remained and have it grow.

Giving their home the name “Sawtelle Japantown,” they thought, would honor the legacy of the Issei and Nisei pioneers and build momentum for the renovation of the Japanese Institute of Sawtelle. The Japanese Institute has hosted a Saturday Japanese-language school and martial arts dojo, but Sakamoto and others want it to become a full-fledged community center.

This push to name Sawtelle Japantown reminded me of the visits I got from an older gentleman named Saburo 25 years ago when I was the editor of the daily newspaper Rafu Shimpo in Little Tokyo. Saburo regularly walked over from his home, a residential hotel that housed mostly bachelors, to share either a new conspiracy theory or his latest passion project. 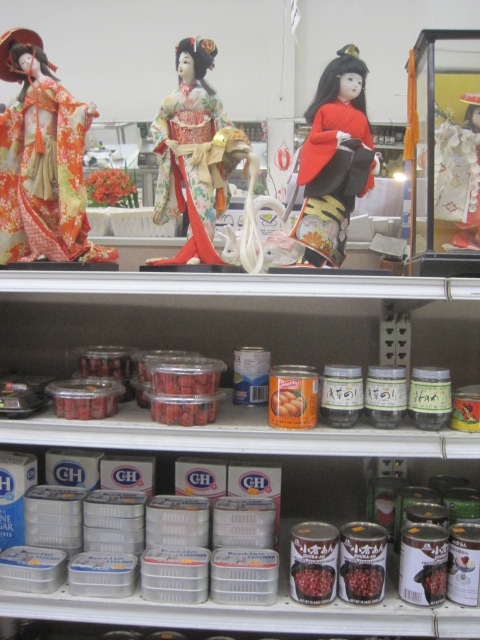 Inside the Granada Market on Sawtelle Boulevard.

We had gotten to know each other when he was active with the Li’l Tokyo Tenants Group, which protested the closing of a 100-unit low-income hotel on Second Street after a developer had purchased the property in 1985. The redevelopment of Little Tokyo, one of the oldest and largest Japanese-American enclaves in the United States, was at the beginning of a wave that hit other Japantowns, both official and unofficial, along the West Coast. As this was happening, Saburo and others in Little Tokyo who wanted to rename a short street not far from City Hall—Weller Street—in honor of the Hawaii-born Japanese-American Ellison Onizuka, one of the seven crew members who had died on the space shuttle Challenger.

Even though they faced opposition—many businesses on the street opposed the idea because Onizuka in Japanese literally means “Devil’s Tomb”—the Onizuka supporters prevailed. Saburo’s success should remind us how much we need names, however imperfect; it’s hard for memory to reside in a place without one.

Japanese-Americans can now live outside of Japantowns and do. So why mark a neighborhood with a particular ethnic flavor that nods to a past rooted in exclusion?

Well, just because the past is past doesn’t mean it doesn’t exist. Like the sedimentary layers under our feet, layers of past experiences and people influence the present. Younger generations are ghost trackers, drawn to cultural and historic gatherings in Japantowns to keep the memory of people like Saburo alive. Sawtelle and Little Tokyo won’t look the same in 20 or 50 years, but they’ll still be Japantowns, just Japantowns of the 21st century.