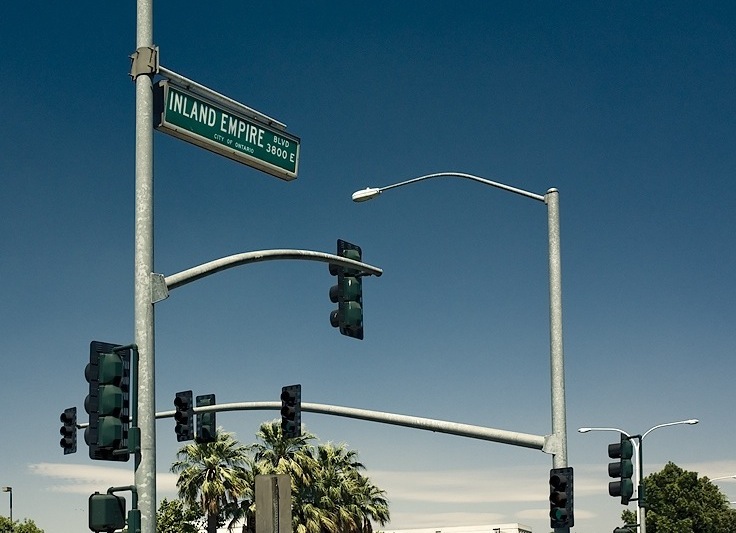 The Empire is back.

I’m talking not about the new Star Wars movie but about Southern California’s Inland Empire. Of course, you shouldn’t hold your breath waiting for a statewide celebration of the remarkable economic comeback of the I.E.—which encompasses Riverside and San Bernardino counties and their 4.4 million inhabitants. When it comes to this huge section of the state—with a population greater than Oregon’s—if the good news isn’t being ignored, it’s being spun as bad.


The I.E. has real problems. Poverty rates are among the highest in the state—more than 17 percent in Riverside County and more than 20 percent in San Bernardino County, or about double the rate of Bay Area counties.

The Inland Empire is by far California’s least fashionable region. That’s because it resembles the hotter, grittier, more working-class place the state is actually becoming, not the beautiful, wealthy place we aspire to be. When the I.E. is growing, such gains are dismissed as unwanted or unnatural sprawl; when the I.E. struggles, such pain is considered to be just rewards for an impudent dystopia.

The glare on the I.E. was especially harsh during the Great Recession, with some pinning the global economic meltdown on its housing mania and resulting foreclosure crisis. Unfortunately, that narrative has proven so durable that it’s obscured the Inland Empire’s startling recovery. An unemployment rate that topped 14 percent in late 2009 has been cut in half. Housing prices have roared back. If there is a “California comeback” like one the governor is touting, the I.E. is driving it.

If you live near the coast, you may not have heard that the Inland Empire has been leading the state in new business creation; from 2012 to 2013, the region, while representing just 12 percent of California’s population, accounted for a majority of new businesses statewide. Most of the industrial space under construction in California is in the I.E. And the Inland Empire has been adding jobs at a rate rivaling the Bay Area. Projections suggest that it will be the fastest-growing part of the state over the next five years.

This isn’t solely a tale about the rebound of the construction business. The region’s logistics industry, which warehouses and moves goods coming in and out of the ports, is booming as a strong dollar has led to a spike in imports. Low gas prices are helping transportation and trucking firms—and making life cheaper for workers and families in a region where driving is essential. And the I.E. is blessed with relatively cheap land for development and housing—an asset that is scarce elsewhere in California.

The improvement is visible to the naked eye. This Easter, while visiting relatives in the arid area where the cities of Yucaipa and Redlands meet, I found local retail spaces full of businesses again for the first time in years. Communities in highly populated areas of the Inland Empire—Ontario, Chino Hills, Corona, Rancho Cucamonga, Riverside—are experiencing significant retail growth. Murrieta, infamous for anti-immigrant protests last year, is benefiting, ironically, from foreign investment. The high-end grocery store chain Whole Foods is making a push into the area, too.

Of course, this sort of growth—in housing, in retail, in logistics—is considered gauche in California’s loftier (and leftier) precincts, where thought leaders are more likely to mouth the word “sustainability” than to say their prayers.

As Inland Empire Economic Partnership chief economist John Husing has pointed out, California’s environmental regulations are essentially at war with four major sectors in the I.E.—logistics, construction, manufacturing, and mining. And the drought is making the I.E. even more unpopular; photos of drier areas of the Empire often accompany newspaper stories blaming water shortages on supposedly “limitless” growth in today’s low-growth California.

Of course, the I.E. has real problems. Poverty rates are among the highest in the state—more than 17 percent in Riverside County and more than 20 percent in San Bernardino County, or about double the rate of Bay Area counties. The education levels of its population are abysmal; only one in five adults in the Inland Empire have a college degree (compared to 35 percent in San Diego County and more than 40 percent in the Bay Area). The region’s biggest airport, Ontario, has been run poorly for years by Los Angeles’ notoriously dysfunctional airport commission. And the region’s public health statistics are ugly, with the Inland Empire suffering California’s biggest shortages of primary care and specialist physicians. A generation of cuts to the state budget have disproportionately hurt the newer, less stable local governments in the I.E.

The good news about all these problems is the enormous room, and potential, for improvement. The health care industry is starting to take off inland, with the Affordable Care Act bringing more customers as training programs promise to bring more skilled health care workers and higher-income people to the region. Business and government leaders are trying to take the Ontario airport back from L.A. The leaders of UC Riverside and Cal State San Bernardino have launched an effort to double the number of local students finishing their degrees.

If the comeback continues, the I.E.’s problems will have more to do with its success. Will the region run out of space for warehouses? Will rising housing costs price out too many families? Will too many people leave the expensive coast and create more traffic?

You can be sure that Californians will hear more about these problems than the I.E.’s successes. But these will nonetheless be good problems for a region to have. As Alien Ant Farm—a band with Riverside roots—likes to sing, “These days are great. There’s work to do.”