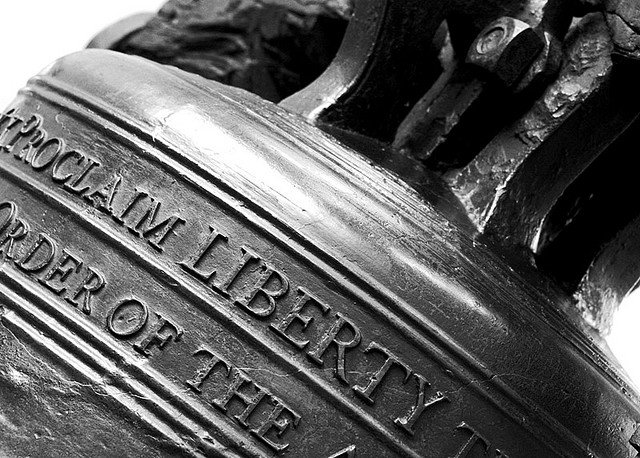 As schoolchildren we learn that all people–and all Americans–are created equal. But sometimes it feels as if this country’s leaders have forgotten that equality is one of the tenets this nation was built on. In Our Declaration: A Reading of the Declaration of Independence in Defense of Equality, Institute for Advanced Study political philosopher Danielle Allen argues that we need not look further than the United States’ founding document to be reminded of how important this idea is. Allen, winner of the Fifth Annual Zócalo Book Prize, visits Zócalo to discuss whether democracy can exist without equality. Below is an excerpt from her book.

The Declaration of Independence matters because it helps us see that we cannot have freedom without equality. It is out of an egalitarian commitment that a people grows—a people that is capable of protecting us all collectively, and each of us individually, from domination. If the Declaration can stake a claim to freedom, it is only because it is so clear-eyed about the fact that the people’s strength resides in its equality. The Declaration also conveys another lesson of paramount importance. It is this: language is one of the most potent resources each of us has for achieving our own political empowerment. The men who wrote the Declaration of Independence grasped the power of words. This reveals itself in the laborious processes by which they brought the Declaration, and their revolution, into being. It shows itself forcefully, of course, in the text’s own eloquence. When we think about how to achieve political equality, we have to attend to things like voting rights and the right to hold office. We have to foster economic opportunity and understand when excessive material inequality undermines broad democratic political participation. But we also have to cultivate the capacity of citizens to use language effectively enough to influence the choices we make together. The achievement of political equality requires, among other things, the empowerment of human beings as language-using creatures. Equality and liberty—these are the summits of human empowerment; they are the twinned foundations of democracy. What fragile foundations they are!

Political philosophers have taught us to think that there is an inherent tension between liberty and equality, that we can pursue egalitarian commitments only at the expense of governmental intrusions that reduce liberty. What’s more, in the last half century, our public discourse has focused on burnishing the concept of liberty, not equality. Consequently, we understand the former idea better. We have ideas ready-to-hand about the danger posed to personal freedom by excessive governmental regulation and the value that lies in autonomy and self-creation. What do we know any longer about equality?

Because we have accepted the view that there is a trade-off between equality and liberty, we think we have to choose. Lately, we have come, as a people, to choose liberty. Equality has always been the more frail twin, but it has now become particularly vulnerable. If one tracks presidential rhetoric from the last two decades, one will find that invocations of liberty significantly predominate over praise songs for equality. This is true for candidates and presidents from both parties.

Matters have gone so far, in fact, that we have even failed to notice the disappearance of the ideal of equality from our interpretations of the Declaration. In the 2012 presidential election, the candidates held their final debates in front of a blue backdrop on which the words of the Declaration were reprinted in white. This inspired the presidential challenger to riff on the founders’ language. He read out this:

We hold these truths to be self-evident, that all men are created equal, that they are endowed by their Creator with certain unalienable Rights, that among these are Life, Liberty and the pursuit of Happiness—

Then he dwelled on the ideas of life and liberty to argue for military funding; he focused on the word “Creator” to argue for religious toleration and freedom. And he emphasized the phrase “pursuit of happiness” to advocate caring for the needy, pursuing discovery and innovation, and pruning toward a minimalist government that gets out of the way of individual choices about how to pursue dreams.

What happened to equality? On the subject of equality, no more important sentence has ever been written than the one quoted by the candidate, but he had nothing to say about that ideal. Even more surprisingly, his opponent did not point this out. Nor, for that matter, did anyone else in the frenzy of subsequent media commentary.

I have told this story without naming the candidates because the candidates, the parties, do not matter. Yes, it was the Republican, Mitt Romney, former Massachusetts governor, who glossed the most famous sentence of the Declaration—the very “proposition” about equality around which Lincoln crafted his Gettysburg address—without once invoking the idea of equality. But his Democratic opponent, Barack Obama, our first African-American president, never called him on it either.

Political philosophers have generated the view that equality and freedom are necessarily in tension with each other. As a public, we have swallowed this argument whole. We think we are required to choose between freedom and equality. Our choice in recent years has tipped toward freedom. Under the general influence of libertarianism, both parties have abandoned our Declaration; they have scorned our patrimony.

Such a choice is dangerous. If we abandon equality, we lose the single bond that makes us a community, that makes us a people with the capacity to be free collectively and individually in the first place. I for one cannot bear to see the ideal of equality pass away before it has reached its full maturity. I hope I am not alone.