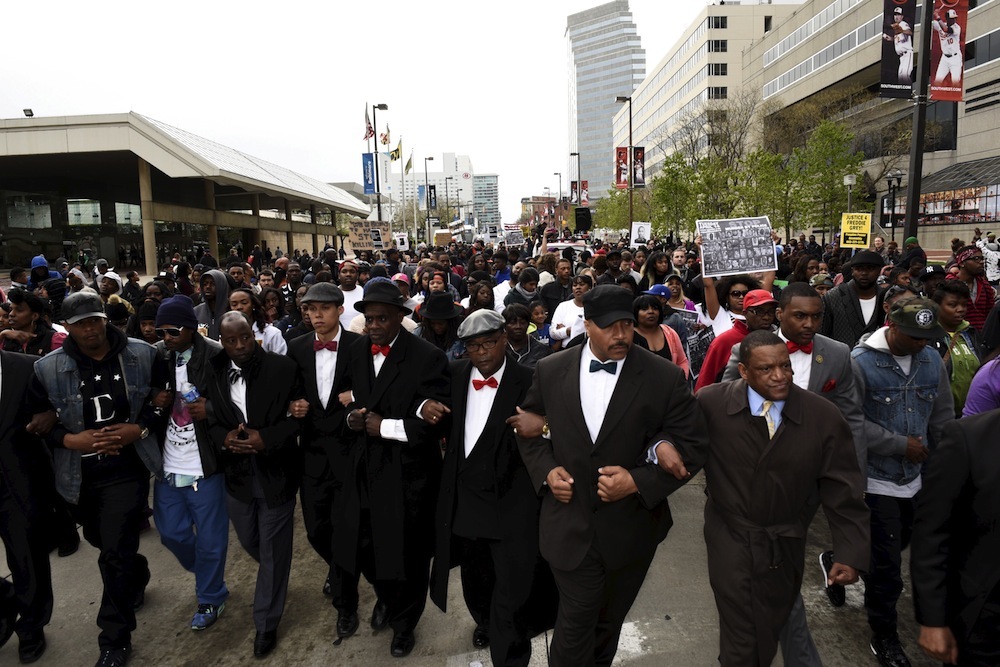 When things turned very ugly in Baltimore on Monday—widespread looting, massive property destruction, arson, and assaults on police, motorists and pedestrians—I called a friend to see if she was okay.

Riots sparked by teenagers—a social media organized “purge” targeting police—began when school let out about 3 p.m., overshadowing peaceful protests over the April 19 death of Freddie Gray, 25, whose spinal cord was crushed while in police custody.

My call was to Sister Peggy Juskelis, a School Sister of Notre Dame and lifelong Baltimorean who serves as president of Mother Seton Academy, a tuition-free Catholic school in a neighborhood that took a beating in the 1968 riots that followed the assassination of Reverend Martin Luther King, Jr.


Where you can have a plate of the greatest seafood in the world, be killed on the sidewalk before the meal’s been digested, and have the person who took your life murdered by the police on the way to jail.

Sister Peggy works in a vulnerable neighborhood on the Eastside and lives in one just as tenuous on the Westside. Her life’s work has been to ask for money for the education of poor kids, to give some of the tens of thousands of have-nots in Baltimore a chance to move up and out of poverty.

As a good Catholic boy—taught that the highest law is one’s conscience—I respectfully disagreed.

As it is mine.

My beloved Crabtown—some 620,000 mostly good and often strange people (think of John Waters’ movies as documentaries)—is where the National Guard was activated during a state of emergency in the worst pandemonium since the King riots a half-century ago.

Baltimore is a historic port city with a history of atrocity and violence going back to its colonial beginnings. In a 1773 letter-to-the-editor, an alarmed resident called for more streetlamps to deter gatherings of hardened criminals. The population at the time was a mere 5,000.

The first casualties in the Civil War took place not on a battlefield but on the streets of Baltimore, already known as Mobtown. In 1861—on a long-ago April 19—pro-Confederate civilians attacked a militia of southbound Union soldiers with bricks and pistols. Four soldiers and a dozen rioters were killed.

More than 150 years later, Baltimore maintains deep reservoirs of racism—originally white against black, though the resentment has been pretty evenly distributed for some time—and the Freddie Gray riot was manna for the haters.

My parents’ longtime next-door neighbor in the suburbs south of the city, a man who has never lived outside the county line, spotted me in my folks’ driveway yesterday.

An angry, Obama-hating white man (you can tell when he’s really pissed off by how aggressively he rakes the lawn), he knows I have long lived in the city, knows that I love it deeply, and that I skew well left-of-center.

From his yard he shouted, in a mock black accent: “CHARM CITY—HA!”

Yeah, Charm City—birthplace of “The Star-Spangled Banner”—where you can have a plate of the greatest seafood in the world, be killed on the sidewalk before the meal’s been digested, and have the person who took your life murdered by the police on the way to jail.

Or, if you’re like me—not privileged via wealth but the good fortune of education, pigment, and vocation—you can live a long and productive life without becoming a victim of crime. Which held true yesterday, perhaps because the riots kept me from getting back into the city from my parents’ home.

The trouble began Saturday night, paused for a day, and erupted in full on Monday. The response of Baltimore Mayor Stephanie Rawlings-Blake was widely seen as tentative, and it likely damaged her political ambitions.

Back in 1968, the riots were much larger and geographically dispersed, with shots fired at firemen trying to put out burning buildings. The chaos swiftly brought martial law and federal troops to the city.

Then-Maryland Governor Spiro Agnew’s caustic stance against rioting African-Americans made headlines and his career, bringing him to the attention of Richard Nixon, who had a “Southern strategy” (lure white Democrats by pitting them against blacks) for winning the White House.

I was 10 the last time Baltimore burned. As a tugboat man, my father was considered part of essential city services—keeping the port open to trade—and crossed police lines on his way to the docks.

Between shifts, he’d come home and tell stories of what he’d seen. Yesterday, I got caught at that same house near the airport and was unable to get back into the city to be with my bride of two weeks, whose North Baltimore neighborhood was untouched.

Again, mere inconvenience compared to what happened in poor black neighborhoods that still haven’t recovered from the ’68 riots.

Some 20 years ago this summer, in July 1995, I was a reporter riding a bus through Baltimore—from the harborside tourist industry to the wastelands of the ’hood—with a group of mayors from Israel who wanted an up-close look at a city working hard to keep its head above water.

We stopped near Sandtown-Winchester, the Westside neighborhood where Freddie Gray lived until his arrest for the crime of running away from police. Looking around at the entrenched blight, Arik Raz, the mayor of a region near Galilee, asked a local minister, “Who is responsible?”

A church elder named Clyde Harris explained: “Before integration, all black people were in the ghetto together, the rich and the intellectuals along with the poor. After integration, they left the poor behind.

“We were full up with hatred when Martin Luther King [was murdered], and that was the spark that ignited, and we just burned everything. He was our light, and when they took that away we just didn’t care anymore, and we destroyed everything.”

In my works of fiction, I make dramatic arguments that almost anything is possible deep in the bleeding heart of a city I have come to call the Holy Land: from 21st-century Annunciations high above the rowhouse rooftops to dolls capable of flying far beyond the clouds.

Absent the hocus-pocus, such possibility seems to hold just as true in the real Baltimore: from medical miracles at Johns Hopkins Hospital to random acts of kindness that transcend the bumper sticker clichés to cruelties the Islamic State would admire.

In an open letter to the world on Tuesday, the founders of the Viva House Catholic Soup Kitchen—in business since the riots of ’68—wrote: “This is how we view things looking up from the bottom …”

And then, in the spirit of Dorothy Day, the soup kitchen founders proceeded to indict an unforgiving, violent capitalistic system that has produced “yet another generation of young people who will believe that violence is the solution to all problems.”

What I found most troubling is that the rampaging teens and young adults didn’t appear to be frustrated or angry at all. It looked like they were having a good time. Which is more than can be said for the working people who had to get out in front of their homes with dustbins and brooms the next day so they could get to their jobs without worrying about a flat tire.

But, like the line of ministers who marched arm-in-arm through the streets yesterday for calm (led by a man in a wheelchair, some of the clerics kneeling along the way in prayer), most Baltimoreans share a love and a hope for this screwed-up city that borders on the delusional.

A belief in better days.