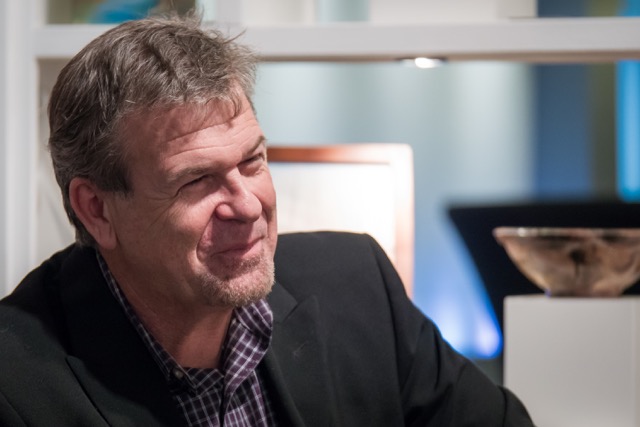 Robert Price is executive editor of The Bakersfield Californian, where he has held practically every job in the newsroom since joining the paper in 1988. Before moderating a discussion of what Bakersfield sounds like today, he talked about his football career, his love of fried zucchini, and what color electric guitar he would play in the Zócalo green room.

I like speed, so I think The Flash would be the guy. Also, I look good in red leotards. I used to return punts in high school. It’s a skill I could have used a few times.

What was the most important year of your life?

That’s a good question. 1982 was a lot of fun. I was editor of the newspaper at Sacramento State University. I had an active social life. I played spring ball with the Sacramento State football team, even though I wasn’t actually on the team. I had a great time. I was the third-string tight end. The first two were 6-foot-4, probably 240 pounds. I was considerably smaller, but I caught the ball better than them. And I was better looking.

If you could play any instrument, which would you choose?

How do you procrastinate?

I read emails. That’s my greatest vice: reading emails. And I respond to them all, so they multiply. They’re like tribbles, from Star Trek. The little fuzzy cute things they brought up from some planet. They’re like intergalactic rabbits.

Chickens. I grew up in Petaluma, which was the egg capital of the world. We moved chickens from trucks into chicken coops, and from chicken coop into trucks, depending on what their imminent fate was. It was brutal and horribly smelly; all you could do with your clothes was burn them afterward.

Joe Cocker’s “With a Little Help From My Friends.” I can do that for you tonight if you’d like.

I guess “low-hanging fruit” is probably up there. It’s one that I’ve banned from my own vocabulary, so I don’t know if that makes it a favorite or what.