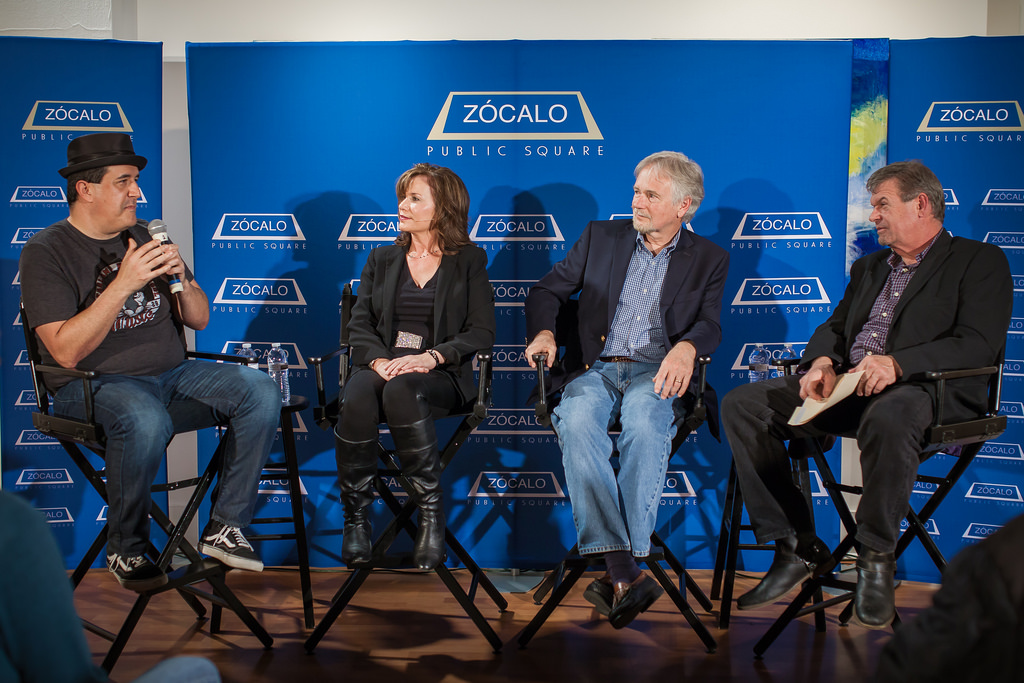 Depending on the person you ask, Bakersfield, California became a musical mecca thanks to the Gold Rush, Dust Bowl migration, or World War II, when young men flocked to California to work in shipyards and aircraft factories. But in opening a “Living the Arts” event co-presented by the James Irvine Foundation, moderator and Bakersfield Californian executive editor Robert Price said he chooses to start with 1951. That year, a young orange picker landed in Bakersfield and bought a used Telecaster guitar.

“American music was never the same,” said Price—and neither was Bakersfield. In the 1960s, that young musician, Buck Owens, went on to record a slew of number-one country songs. Merle Haggard followed suit from the mid-1960s through the 1980s. In just a decade, Bakersfield became a “font of creativity,” said Price—and in 15 years, it was also a country music brand.

What made the music of Bakersfield special? And how do you define what became known as the “Bakersfield Sound”? Price asked the panelists these questions before a full-house crowd at Bakersfield’s Metro Galleries.

Jim Shaw, Buck Owens’ longtime music engineer, keyboard player, and business manager, said that the Bakersfield Sound developed because the city offered artists so much freedom. In Bakersfield, a musician could hire his own band, write his own songs, and do his own thing. Producers would “get the right guy and get out of the way,” said Shaw. In Nashville, musicians played with the same studios and backing bands; the raw edges got sanded down. In Bakersfield, they stayed raw.

Matt Munoz, a Bakersfield musician and entertainment writer, said that when he thinks of the Bakersfield Sound he thinks of working-class people, agriculture, and “a lot of sweat.” It’s about working hard and partying hard, he said.

How, asked Price, has music influenced the city’s broader culture?

Singer and local economic development official Jennifer Keel Faughn said that music gives Bakersfield “a sense of place [and] quality of life.” And it makes the city a destination: 1,500 to 2,000 people visit Buck Owens’ Crystal Palace—a museum as well as a music venue and restaurant—each week.

It also gives the city a hipness factor, said Munoz: “Buck Owens is really hip all over the world.”

But the club scene that nurtured Buck Owens has deteriorated. Shaw recalled that when he started playing in bars at age 18, it was possible to play six nights a week and make $20 a night—enough to buy a home and support a family. There were dozens of musicians like him making a living by entertaining people who went out every night to party and listen to live music. They’d often drive home drunk. Thanks to a combination of a larger movement against drunk driving, economic downturn, and new forms of recorded music (including the emergence of DJs), theorized Shaw, the club scene dried up. “I can’t think of one place in Bakersfield today where you can make a living playing music,” said Shaw. “You have to have a real job and do it a couple nights a week.”

You can still hear the Bakersfield Sound if you go to the right places. Munoz pointed to Monty Byrom, front man of the band Big House, as one local musician following in the city’s tradition. But local musicians aren’t necessarily doing something new. “I think there are a lot of musicians here who pay homage to the Bakersfield Sound,” cautioned Munoz.

Perhaps, suggested Price, such homages mean it’s time to go off in a different direction entirely.

Some artists already have, said Shaw. The band Korn comes from Bakersfield, and while they sound nothing like Buck Owens or Merle Haggard, they do have something in common. “We’re talking about raw, inventive music that stood everybody on their ear,” said Shaw. Korn’s guitarists popularized putting an extra string on the guitar, he said.

Like Owens, “they changed music,” said Munoz. They may have left Bakersfield in order to become famous. But “when you listen to a Korn record, it sounds like Bakersfield to me,” he said.

Faughn said that the historic Bakersfield Sound is a touchstone for young artists who can look to Owens and Haggard and say, “He did it—so can I.”

Shaw said that Bakersfield has a lot of very good local groups, but he’s not sure if they’re going to be able to break out. Record companies used to come to Bakersfield to scout talent, but now you have to leave if you want to get discovered—and the market is tough.

Young artists have to be entrepreneurial. Munoz said that one of the best ways to develop a following—for local bands and touring acts—is to put on living room tours, giving concerts in private homes. If you sell your own tickets and do your own marketing, you just might have a chance at building a fan base.

A few Bakersfield bars and nightclubs—including the Crystal Palace, Trout’s, and Ethel’s Old Corral—still host live country music. But you’re not going to drive through downtown and hear the sounds of a steel guitar humming through the streets, said Munoz. (You’re 40 years too late for that, said Shaw.)

In the audience question-and-answer session, the panelists were asked to advise young musicians on how to find their footing in Bakersfield—getting mentors, booking shows, connecting with audiences.

“This is a great self-starter market. You can start anything here,” said Munoz—from a band to an open mic night. “The people will come.”

You’ve got to make your own stage, added Faughn. She said that the best way to find mentors is to surround yourself with people who play the kind of music you want to play—and then get up and sing. 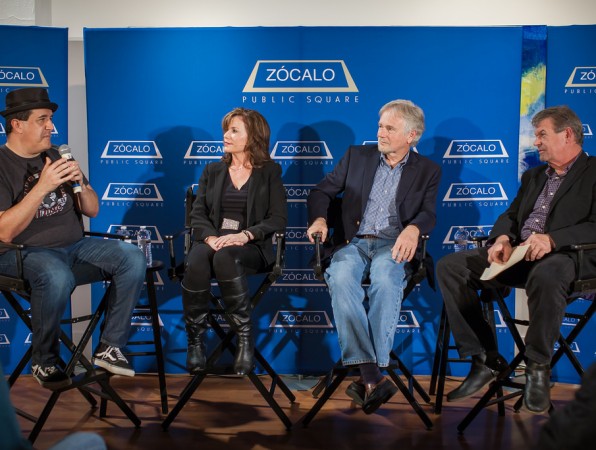 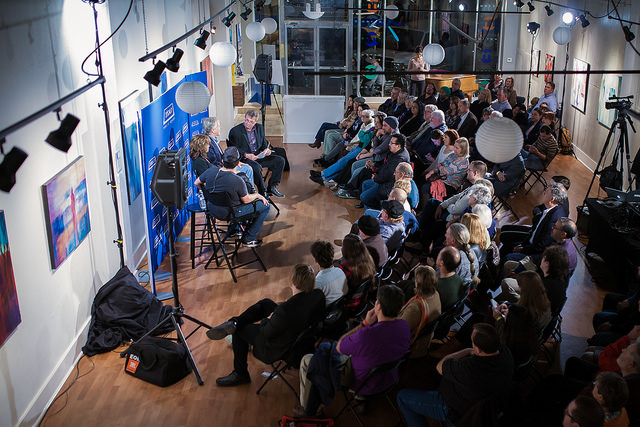 It was a full house at Metro Galleries in downtown Bakersfield 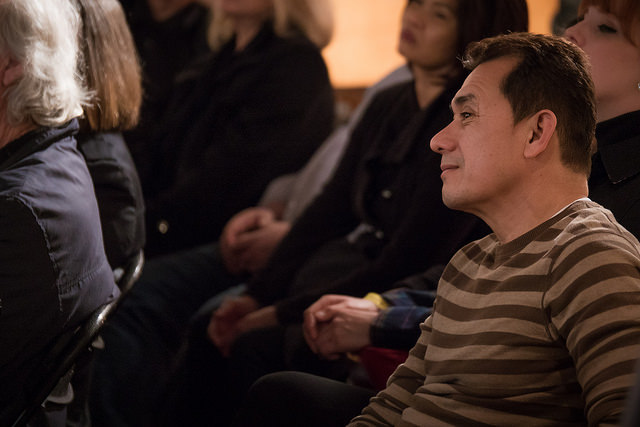 Listening to the panelists discuss the Bakersfield Sound 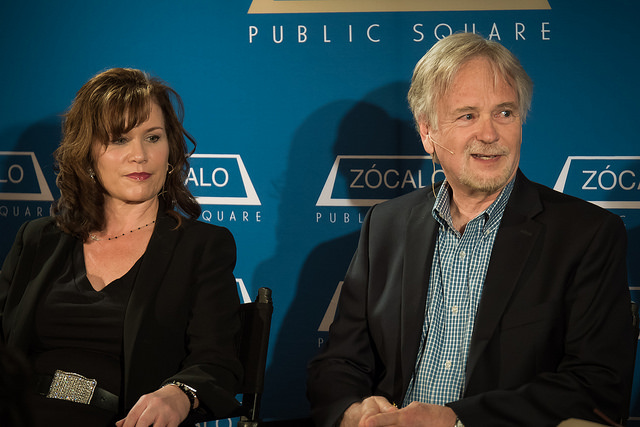 Jennifer Keel Faughn and Jim Shaw, both of whom still perform with the Buckaroos, Buck Owens’ former band 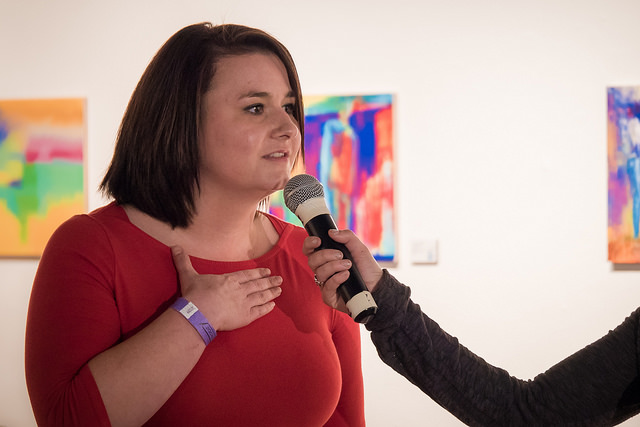 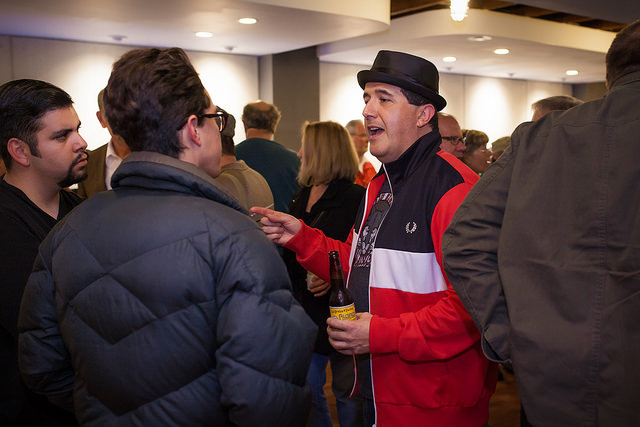 Matt Munoz (right) talks with guests at the post-event reception