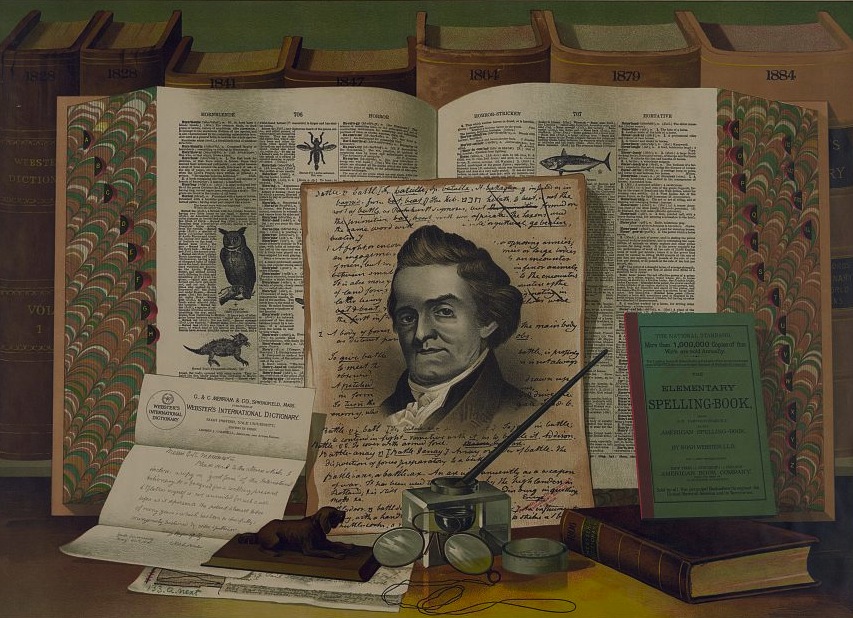 In the late 18th century, as the recently independent states were working to define what America was—after fighting with England about what it wasn’t—grammar books were still teaching American children to speak like proper Englishmen and women. The books taught such formal, outdated usages as the correct verb forms for thou (thou goest, thou wilt) and proper uses of shall (used with I and we for simple future, with you, he, she, and they to imply insistence or a threat). They spelled words like flavour, musick, and centre the British way. They also introduced some new restrictions on the language, such as banning prepositions at the end of a sentence, in favor of phrases like, To whom did she speak. And they insisted on using subject pronouns after forms of the verb to be—It is I, It was she.

The approach of the English—and therefore Americans at the time—was to model their tongue after Latin, a high-status language typically taught only to boys attending elite private schools. The study of Latin, besides being required for admission to the universities, was considered excellent mental training. Unfortunately, Latin and English aren’t a good fit—their structures are very different. Forcing English into a Latin template led to sentences that felt artificial.

Noah Webster, in many ways the father of American English, rejected these rules. A true revolutionary, Webster thought Americans should break free from the old country, take charge of their language, and build a new standard from the ground up—one that reflected the way most of his countrymen actually talked. Like others who participated in the new country’s founding, he took the democratic ideal seriously. “As an independent nation,” he declared in his 1789 book Dissertations on the English Language, “our honor requires us to have a system of our own, in language as well as government.”


American English ought to be based on the natural rules of the language and “the general practice of the nation.” In other words, if everyone said it, it ought to be standard.

As a linguist and former librarian, I had long pictured Webster as the stuffy 19th-century figure who gave his name to the ponderous dictionary displayed on a stand in the library. But, as I delved into his story for my book Founding Grammars, I realized that Webster was a visionary—even a radical—so far ahead of his time, in fact, that grammar and style guides are only now catching up with him.

Webster was born in West Hartford, Connecticut in 1758 to parents whose families could be traced back to the Plymouth Colony. As a student at Yale, Webster participated only briefly in the Revolution. In 1777, he marched with other West Hartford men, including his father and brother, to join the fighting at Saratoga, New York. Although they arrived after the battle was over, the experience stayed with Webster all his life. He could never speak of the American victory in later years without being moved to tears.

“For America in her infancy to adopt the present maxims of the old world would be to stamp the wrinkle of decrepit age upon the bloom of youth,” he wrote in Dissertations. Instead, he believed, this new nation needed a new language, to be used uniformly across the United States to cement new national bonds. Grammar books of the time were doing “much more hurt than good,” he complained. “The authors have labored to prove, what is obviously absurd, viz. that our language is not made right, and … have tried to make it over again, and persuade the English to speak by Latin rules, or by arbitrary rules of their own.”

He therefore proposed that American English ought to be based on the natural rules of the language and “the general practice of the nation.” In other words, if everyone said it, it ought to be standard. And he set about writing books and essays, and eventually creating dictionaries, in defense of his approach. The first volume of his three-volume grammar and spelling series for schoolchildren, A Grammatical Institute of the English Language, appeared in 1783. In 1806, he published an early version of his dictionary—the first to feature American English—and followed up in 1828 with the groundbreaking American Dictionary of the English Language, which included 12,000 American words never before recorded.

Webster championed the use of more natural grammar, as in It is me and Who did she speak to? He embraced new words like electioneer and snack, repurposed old words like congress, and included slang like ain’t. And he introduced many new, simplified spellings, including dropping the u in words like favor and the k in words like music, and changing re to er in words like center.

Some reviewers criticized his new dictionary for including “low, coarse” Americanisms. Writing to his brother-in-law, Webster asked, “What is the difference, in point of authenticity, between respectable American usage and respectable English usage?” Clearly, he thought the answer was “none”—to him, they were equally legitimate if they were in daily use.

Webster did have some biases: For example, he was prejudiced in favor of his native New England dialect, which he thought had fewer faults than speech from other parts of the country. He did frown upon a few New England pronunciations that he considered nonstandard: For instance, he noted that the region’s “yeoman” class pronounced er like ar in words such as mercy. He was nonetheless one of the few language scholars of his day to recognize that linguistic diversity and evolving usages are natural.

Webster also occasionally pushed usages and spellings that most people thought were eccentric. For example, he fought a long, losing battle to make you a singular subject—trying to make saying you was standard. It was marginally acceptable in the early 19th century, but became less so over time. He also proposed extreme spellings, such as wimmen for women and tung for tongue, that never caught on.

Over the years, Webster’s political views grew more conservative. He was friendlier toward the mother country and less impressed with his fellow citizens than he had been in the patriotic fervor of his youth. He strongly disapproved of the folksy backwoods politician Andrew Jackson, elected as the first “people’s president.” Webster’s experiences with local and national politics persuaded him that Americans were better off governed by more patrician leaders, such as John Quincy Adams. In spite of his changed political outlook, however, he remained staunchly committed to the ingenuity and progress of American speech, including American word inventions and the common people’s grammar.

Webster would surely be pleased to know that modern Americans are beginning to come around to his grammatical pronouncements. Among others, Patricia T. O’Conner, author of Woe Is I, is in favor of using me and other object pronouns after to be. Bryan Garner, author of Garner’s Modern American Usage, says that the rule against sentence-final prepositions is “spurious.” Voicing a sentiment that Webster would no doubt heartily approve, Garner admonishes, “Latin grammar should never straitjacket English grammar.”

Webster’s flexible attitudes would fit right into today’s world of language professionals, who post new words and phrases online and hold grammar forums on their blogs. From the intrepid word collectors of the American Dialect Society, who recently voted the hashtag #blacklivesmatter their word of the year, to the new generation of editors at the Associated Press Stylebook, who now approve of hopefully to mean “it is hoped,” it seems that the guardians of our lexicon are embracing language change these days.

And anyone can make contributions. We can all submit a new slang word or phrase to Urban Dictionary, along with our own definition, and anyone else can vote it up or down. At last count, selfie had 64 definitions, with the top vote-getter garnering over 7,000 thumbs-up. Regular folks like Peaches Monroee can introduce terms like on fleek, and see the term tweeted around the Internet in record time.

If Webster were still around, he would no doubt say that’s how things should be. He’d probably be surfing the Internet to collect material for the latest revision of his dictionary. And to those who would argue that English needs to stay rooted in the Old World, he might just tweet, “Bye Felicia.”