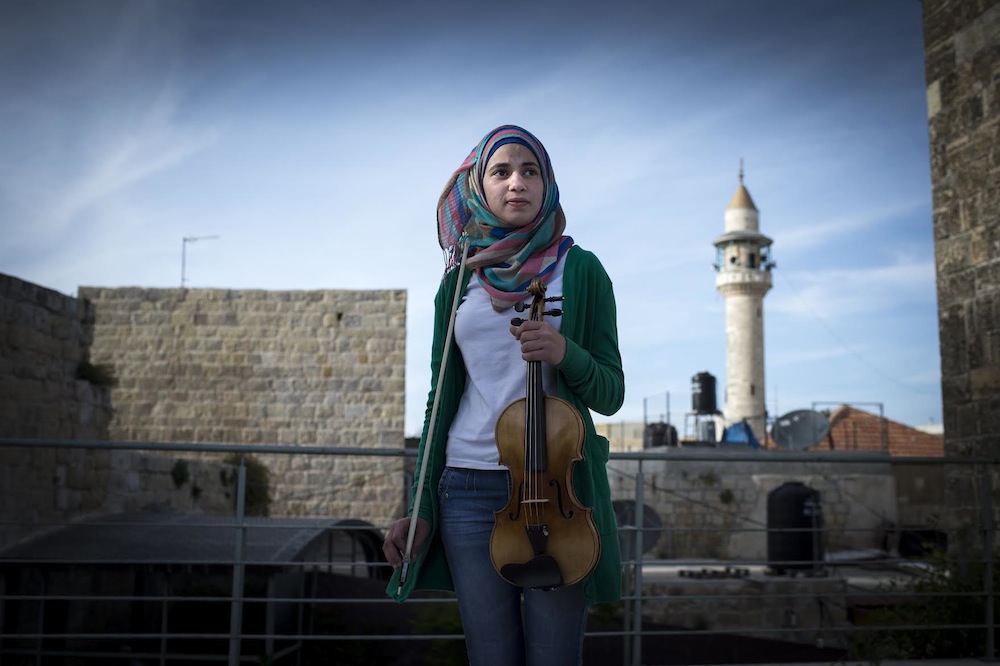 Over the last five years, as I criss-crossed the West Bank to document one young musician’s dream to build music schools amidst Israel’s military occupation, I’d often come upon a stark tableau that never failed to shock: charred or razed olive groves, among the estimated 800,000 Palestinian olive trees uprooted by Israeli bulldozers or torched by West Bank settlers since 1967, often in the name of “security.”

“It’s normal,” said 13-year-old Alá. She stared out of her bus window toward the field of stumps, and the towering gray separation wall just beyond. Alá, a gifted and traumatized violinist who grew up during the second Palestinian intifada, was riding with fellow musicians from Ramallah to a concert in Bethlehem. The journey once took 20 minutes, but now its snaking path can require at least two hours, depending on the military checkpoints.

“Normal” was also the word Alá used to describe the time she and fellow musicians were stopped late one night at a “flying checkpoint,” one of 600 such obstacles in a land slightly smaller than the state of Delaware. There, a soldier demanded she step out of the van and play her violin. And “normal” is the word her neighbor used when told of a 2 a.m. raid by ten soldiers who burst into the flat of a young mother. She was home alone with her 6-month-old boy; they pointed their machine guns at her, only to find they had stormed the wrong apartment.

Indeed, Israel’s military occupation itself, which began 48 years ago this June 6, during the Six Day War, is itself the norm for all Palestinian children, and anyone under the age of 50, living in the West Bank. Occupation, relentless settler colonization, and the ever-splintering archipelago of semi-sovereign Palestinian islands in a sea of Israeli military control: For many Palestinians, this is normal; it’s all they know.

In the face of this—and Israel’s offensive into Gaza last summer, which by U.N. estimates killed nearly 1,500 civilians, including 500 children—it is hardly surprising that a nonviolent movement of Palestinians and their overseas supporters to confront Israel has grown stronger in recent years. The movement is diverse and its approach varies, but its shared tactics include boycotting Israel by divesting from companies that profit from the occupation, shaming artists slated to perform in Israel, and discontinuing exchanges with Israeli universities. The effort, spearheaded by the Boycott, Divestment and Sanctions movement, is reminiscent of an earlier generation’s campaign against South Africa during the Apartheid regime.

Today Israel is paying an increasingly steep reputational price for its treatment of Palestinians. In 2013 the renowned physicist Stephen Hawking canceled a visit to a conference in Israel. Later that year the American Studies Association, citing the conditions of Israel’s occupation, voted to endorse an academic boycott of Israel. Last year the actress Scarlett Johansson was forced to resign as an Oxfam global ambassador after she refused to stop pitching for the beverage maker SodaStream, which operates a factory in the occupied West Bank. Last June, the Presbyterian Church USA narrowly voted to divest from three companies which profit from the occupation, including Caterpillar, whose bulldozers plow under Palestinian olive trees and demolish their homes. Late last year, the European Union announced a ban on importing food from Israeli settlements. Earlier this year, after its bids for numerous contracts in the U.S. were opposed by activists, the French infrastructure conglomerate Veolia sold off much of its operations in Israel. And last month, the singer Lauryn Hill canceled her concert in Tel Aviv.

In the face of these modest successes, Israeli government officials and some of their political allies overseas try to silence pro-divestment critics. A central tactic is to accuse them of anti-Semitism rather than engage in a substantive debate on the realities of an occupation that will soon reach its half-century mark. On May 31 Israeli Prime Minister Netanyahu decried the “international campaign to blacken” Israel’s name, likening the effort to past efforts accusing Jews “that we are the focus of all the evil in the world.” Such cynical accusations are especially insulting to the many Jews, both in and outside of Israel, concerned that the occupation and relentless settlement-building is shredding the fabric of Israel’s democracy.

It is hardly anti-Semitic to point out, for example, the separate and unequal reality facing Palestinian children, like the teenage violinist Alá and her fellow music students, who must wait in long checkpoint lines while the privileged, of another class and religion, whisk through a separate kiosk in the fast lane. Or that the ringing of East Jerusalem by Jewish settlements has all but killed the Palestinian dream of a viable, contiguous, independent state standing side by side with Israel. It is truths like these, not anti-Semitism, that fuel Israel’s critics and strengthen their arguments.

In 2010, an Israeli think tank warned that the growing “delegitimization” challenge could “develop into a comprehensive existential threat within a few years.” Late last year, a former chief of the Mossad, Israel’s intelligence agency, warned that “we are losing the fight for Israel in the academic world,” as Israel has replaced the old South Africa as the catalyst for student outrage on campuses across the Western world.

Palestinians seeking redress, meanwhile, have redoubled their strategy of direct nonviolent confrontation. Surely this is preferable, and more effective, than lobbing rockets over Gaza’s borders toward Israeli cities and its Iron Dome, or sending young men strapped with explosives into Tel Aviv cafés.

Alongside the nonviolent political activism, Palestinians are increasingly using civil society institutions, including the arts, to create the conditions for their own freedom. Nowhere is this more prevalent than in music—most of all, improbably, classical music—where burgeoning youth orchestras and music programs in villages and refugee camps offer Palestinian children a chance to reimagine their lives.

“This is a musical intifada!” shouted Ramzi Aburedwan, the bearded young founder of Al Kamandjati (“The Violinist”), to a bus full of children heading toward a nonviolent confrontation with their occupiers. Ramzi himself, at age 8, had thrown stones at Israeli soldiers during the first Palestinian intifada, which began in 1987. Now, he seeks to give the next generation a creative outlet to resist Israel’s military domination of their lives.

One sun-baked afternoon, I watched Ramzi lead the young musicians, including 13-year-old Alá, off their bus and into the terminal at the towering Qalandia checkpoint, which separates Ramallah from Jerusalem. There in the terminal, a kind of holding pen filled with metal chutes and bars, they set up their music stands in plain view of stunned Israeli soldiers. At the signal of the conductor, Alá and the other members of the youth orchestra paused, instruments at the ready. Ramzi had told the young musicians that if a soldier tells them to stop, “don’t listen, just play.” And so they did: the sound of Mozart’s Symphony No. 6 filled the terminal, to the astonishment of the soldiers and the Palestinians clutching their precious permits for their journey to Jerusalem. We are here, Alá and her fellow musicians seemed to be saying.

On the bus home, Alá allowed herself a smile. “This,” said the teenage violinist, “was the best concert of my life.”