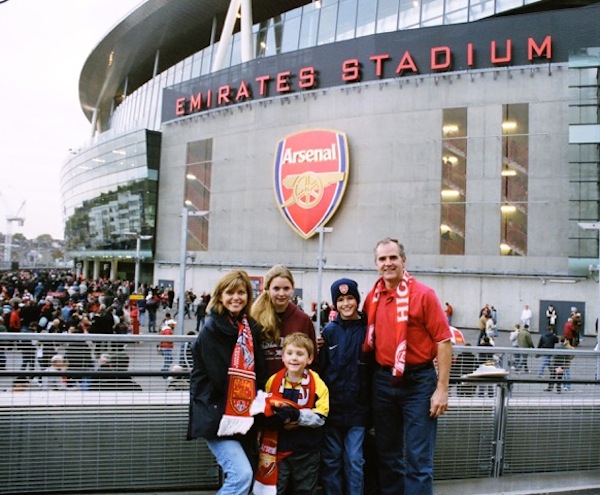 The soccer match was in London, I was in Tokyo, but the incessant text updates on the recent FA Cup Final between Arsenal and Aston Villa cascading down my phone’s screen came from St. Louis. Such are the ways of globalized sports, circa 2015; and of my dad’s Arsenal obsession—which has been a kind of red glue binding our family together for years. On this particular Saturday night, the updates became ever more exuberant, as Arsenal won the trophy handed over by Prince William in convincing 4-0 fashion.

Dad’s text updates cover far more than just goals; we’re talking a full livecast: he lists team possession, player reviews (Sanchez is a favorite), and injury time. The texts start and end with “Go Gunners!” (the nickname for Arsenal supporters). And I am not their sole recipient—my father updates the entire family during all of the north London teams’ games. Call it chronicling, sharing or coping, but it’s endearingly compulsive.

Watching games at home together entails a complex war room strategy. Family attendance is mandatory. People and dogs become chess pieces used as carriers of victory or loss. If Arsenal scores while someone is in the bathroom, it is suggested—somewhat in jest, but not without an aggressive undertone—that they should remain there until the game ends. Just in case, of course.

Arsenal fever is such a known quantity that novelist Nick Hornby wrote an autobiographical ode to the malady, Fever Pitch. My dad, and the rest of us by association, caught it while we were living across the pond in England between 1997 and 2007.

My father had grown up playing “soccer” in St. Louis, but never followed any professional team in any sport until succumbing to Gunner fever. We had been to a few baseball games when my parents brought my brothers and I back to St. Louis for summer vacation, but our support was lackluster at best.

My football knowledge was pathetic when we first arrived in England. I remember a few forays out to watch Queens Park Rangers games because of social events organized by one of my mom’s colleagues who was a diehard QPR with box tickets. Once or twice, my younger brother and I were even able to join the team on the pitch as mascots, but it was more about the uniform than our actual devotion to QPR. When my brother and I had a chance to meet Wayne Rooney, an England national team and Manchester United stalwart, we greeted him as “Mitch Rooney” per our father’s instruction, as we had no clue who he was.

My family fell hard for Arsenal a few years into our London residency when we had a chance encounter in a restaurant with the dour Frenchman Arsène Wenger, who’s coached the Gunners for almost two decades. I was only 10, but recall how my dad, despite no previous interest in Arsenal, stalked Wenger during the dinner, before swooping in and asking if he’d take a photo with my brother. The photo, taken on a cheap flip phone, has since been lost, but the fever dates back to that night. 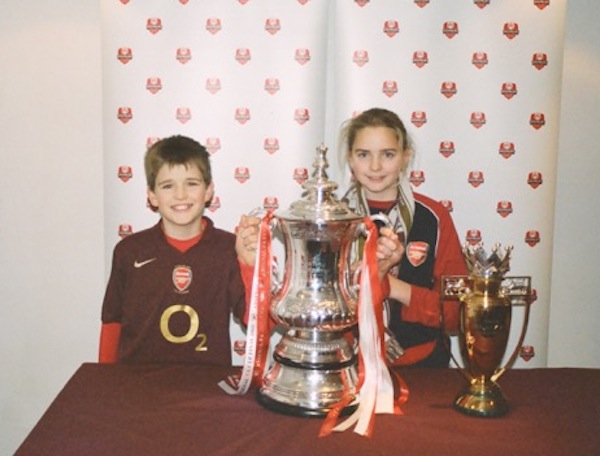 My parents really transformed into Colin Firth and Ruth Gemmel in Fever Pitch—minus the accidental pregnancy, I am relieved to say. My brother’s room was turned into a shrine to Arsenal as he filled every surface and every wall with posters, pillows, and, other souvenirs from the official Arsenal gift shop. When our beloved Dennis Bergkamp retired as the team’s midfield anchor, my brother and I dyed our hair orange, for his native Holland. Every member of our family memorized the team’s players overnight, always accounting for transfers, new players and exits.

And we practically broke up with our neighbors, who were ardent Chelsea fans.

Though my dad was usually reserved and solitary man, he hugged complete strangers if the team scored, and screamed victory chants with the crowd at games. Just seeing another person with an Arsenal shirt walking down the street was enough to spark anything from small talk to a full-blown friendship. A meticulous and orderly man at home, dad had no problem drinking pints out of grubby glasses and laughing loudly with drunken, beer-bellied strangers, if the strangers were Arsenal fans at the pub near the stadium. If Arsenal blew a big chance to score during a game, dad would grab our arms so tight, I would change seats with my mom or my brother to get away from his anxious grasp. If we lost, the dejection was visible, and we would return home immediately. My brother at times vowed to give up supporting Arsenal, while my Dad would struggle through his frustration or write the club some emails filled with suggestions.

A move back to America in 2007 did not cure us and Arsenal fever has only spread in our family. We adopted our second dog the year after we moved back, and during our 20-minute drive home from the pound, our new Labrador mix’s name had been changed from “Buster” to “Gunner.”

My youngest brother, who had no previous interest in any kind of sport, begs to be allowed to go to Arsenal games when my parents go. When my family had intramural fights, Arsenal games were a way of bringing us back together. Even when I was 13 and completely insufferable, horrified to be seen with my parents in most public settings, my dad and I went to Arsenal games together.

Our extended family has also been recruited to the cause, showered with Arsenal regalia of every kind, from key chains to jerseys to small, gold cannon shaped earrings if they wanted to remain subtle fans. Even my uncle and aunt in Oregon, our only family living outside of St. Louis, now regularly email my parents to confer about recent games and opinions on players and management. And there is a lot to email about, as Arsenal is a club drenched in melodrama, one that often seems to prefer playing stylishly to winning, quite possibly to torture its worldwide fan base.

Our trips back to England are carefully planned around Arsenal’s schedule, in order to maximize the number of games we can fit in in our weeklong trips. 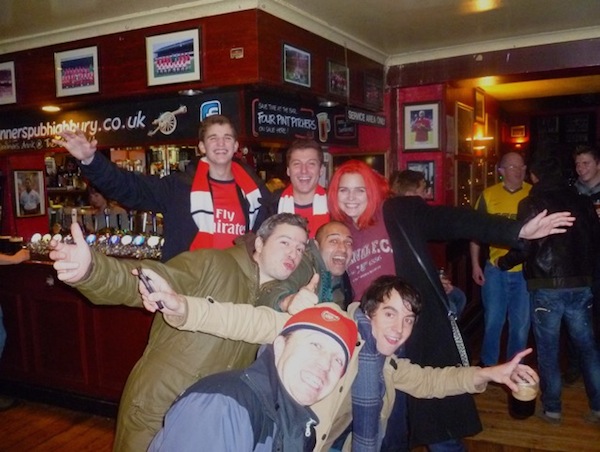 If I didn’t tell you otherwise, you’d think my family’s Gunner fever has been generations in the making. The basement of my parents’ house in St. Louis suggests a professional curatorial interest in the team and its history. It could easily be shown off as an exhibit with framed game day tickets, jerseys, and even patches of soil from Highbury, the club’s fabled old stadium, which has since given way to the gaudier Emirates. It’s like we’re overcompensating for the fact that we’ve only been Gunners for a little over a decade.

The last Arsenal game I went to was with my mom in early April. Arsenal won 4-1 against Liverpool, a rival English power. We teased my dad that he and my brothers aren’t allowed to go to the games anymore, as they had become unlucky. While my dad was in on the joke, for a moment, he considered agreeing to a self-imposed ban.

But now that Arsenal earned a trophy while he was away, I worry my Dad will never go to a game again just so Arsenal can keep their luck going. And maybe he will insist I be in Tokyo, connected by text, anytime they’re playing a significant match. Whatever works.