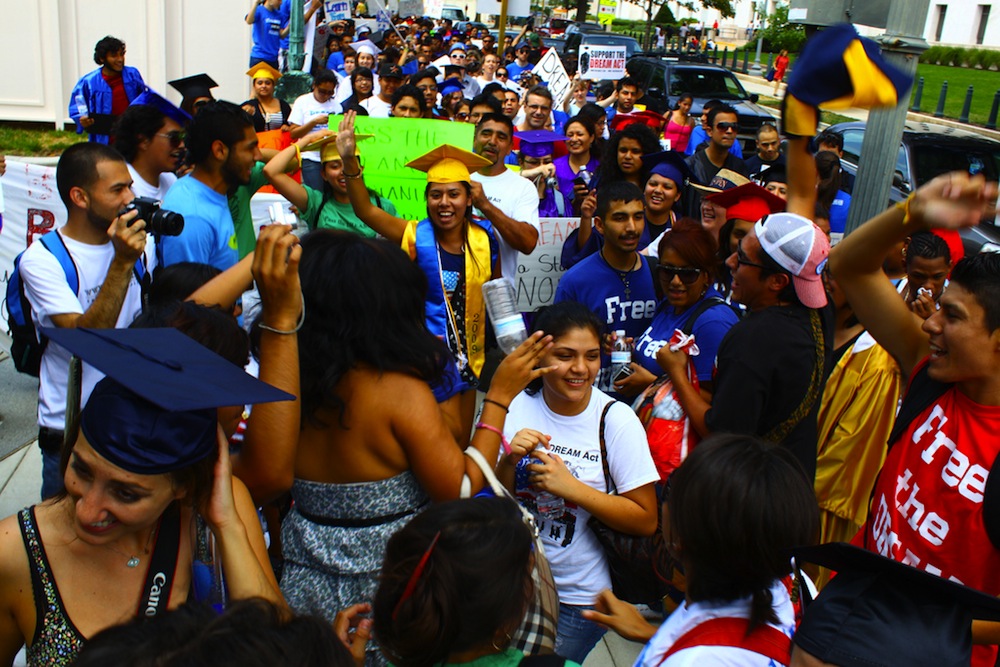 Being a college student often means taking on debt, leaving your home and your family behind, studying harder than ever before, and trying to figure out what to do with the rest of your life. For an estimated 2,000 students in the University of California system and an estimated 13,000 nationwide, it also means dealing with the threat of deportation, being unable to visit sick or dying grandparents, taking care of younger siblings, and hiding undocumented immigrant status.

As director of the University of California’s new Center for Undocumented Legal Services, I’ve dealt with a many complicated cases over the past seven months. Not all of the students we work with are undocumented themselves, either. One UC student was a 20-year-old U.S. citizen whose parents were deported to Mexico seven years ago. He and his younger brother, also a citizen, went back, too, making them two of nearly 500,000 American citizen children living in Mexico as a result of deportations in the last decade. The student returned to the U.S. by himself for college; when he sought the center’s legal advice, he wanted help getting guardianship of his 11-year-old brother so they could live together in student family housing on campus.

Last November, President Obama announced his executive order deferring the deportations of undocumented parents of U.S. citizens, legal permanent residents, and undocumented persons who came to the United States as children and meet several other guidelines, one of which is that they are enrolled in school. A day later, University of California President Janet Napolitano announced the creation of our legal services center, a pilot program to provide immigration services to undocumented students.

Napolitano’s move was surprising on a number of levels. For one thing, Obama’s order was immediately met with legal challenges, including an ongoing federal lawsuit that has it currently on hold. For another, Napolitano’s selection as UC president had been met with strong criticism by many immigrant students because of the high number of deportations during her tenure as secretary of homeland security.

However, Napolitano already had established an advisory council to inform her about the needs of UC’s 2,000 undocumented students. A UCLA study of 909 undocumented college students found that that 61.3 percent of undocumented students come from families living on an annual household income of less than $30,000; 72.4 percent work while attending college. The study also found that more than three-quarters of participants reported worrying about being detained or deported. More than half indicated they personally know someone who has been deported, including a parent (5.7 percent) or a sibling (3.2 percent). According to the study, the combination of financial hardship and fear of deportation creates a climate of stress; 28.5 percent of male and 36.7 percent of female participants reported stress levels that could indicate a serious psychological problem. By contrast, only 4 percent of male and 9 percent of female college students typically report stress levels this high.

Among the recommendations of the advisory council were increased support services for these students, including legal immigration services alongside financial aid, career counseling, and tutoring.

The Center’s services are needed, but I also had a 21-year-old reason for coming on board: Proposition 187, the 1994 ballot initiative that prohibited undocumented California residents from using healthcare, public education, and other state services. Like many other immigrant Californians, I found that my political participation was shaped and sharpened by the approval of that initiative by an overwhelmingly white electorate. I should have voted in that election, but I hadn’t bothered to become a citizen, despite having held a green card for more than 30 years and having worked to defeat it. Afterward, I was furious at myself for not having been able to vote. It’s why I finally became a citizen in 1996.

At the time of Proposition 187, Californians were subjected to relentless accusations that undocumented immigrants were a drain on our budget, our criminal system, and our schools. At the time, it was hard to imagine that public animosity against such immigrants would ever dissipate, and that Californians would ever welcome these families. Yet only seven years later, in 2001, California changed its law to allow undocumented college students to pay in-state tuition. In 2011, the state extended financial aid to these students. Today, California leads the nation in removing barriers to education, driving, professional licensing, and public safety for immigrants.

But of course, challenges remain. I met an undocumented student in her 40s who returned to school after a lifetime of work and raising children and grandchildren who are all American citizens. But she is not eligible for deferred action because of her age, and she has no possibility of adjusting her unlawful status short of federal immigration reform.

My staff and I are able to assist many of the students who come to us, whether it’s helping them apply for the Obama administration’s deferred action program to allow them to remain here legally and offers work authorization (crucial for paying their college expenses). We also assist with applications for permission to travel abroad. And in a number of important cases, our lawyers are able to identify more permanent immigration relief for students who qualify but may not have had previous access to legal services.

In one case, the Center arranged for an undocumented student, the son of farmworkers, to get advance parole to travel for a five-week education program to Asia. In the process, we may have uncovered information that could help the student permanently remain in the U.S. with lawful status.

The Center is still in its early stages. We know we are reaching only a fraction of the students; too many don’t make themselves known. We are under-resourced, and we will soon need additional lawyers to handle our growing caseload. We will have greater impact when we have attorneys present at each campus rather than having our attorneys (three of whom work full-time and one of whom works part-time) travel to the campuses on a rotating basis. Our long-term future is not secure; If and when President Napolitano steps down, there’s no guarantee her successor would continue to fund the center out of the president’s budget.

In another year, I anticipate I will have assisted other students. Like the young woman who was able to leave the country for the first time to attend a grandparent’s funeral. And the student who was a crime victim, worked with the police to help prosecute a criminal, and now is eligible to acquire permanent residence.

The law is there for these students, but without legal assistance, it is an empty promise.