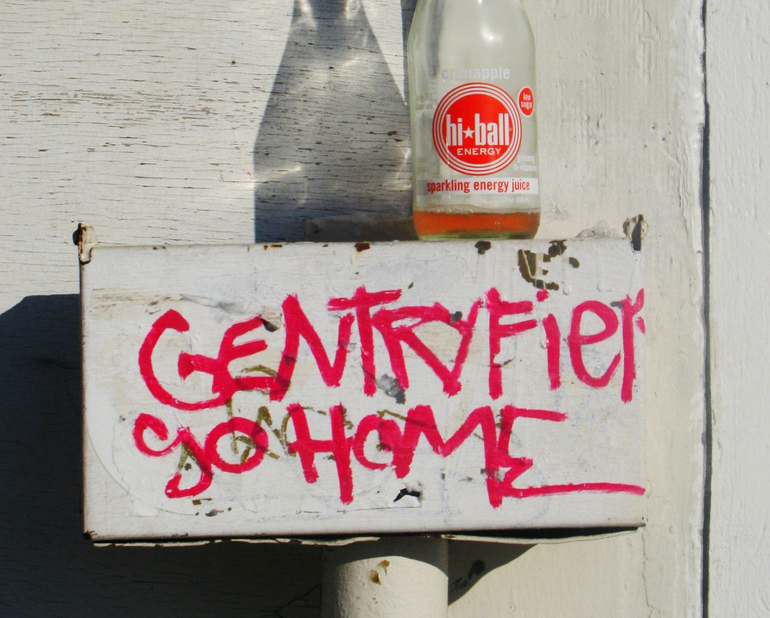 Long-time residents at risk of losing out in civic process

The need to respect a neighborhood’s history

When a British sociologist coined the term “gentrification” in 1963, she wrote that it happens when “working class quarters have been invaded by the middle class … until all or most of the working class occupiers are displaced and the whole social character of the district is changed.”

What do such character shifts look like here in L.A.? The organic market that opened in an Echo Park lot once occupied by a Save A Lot discount store? The presence of empty apartment buildings in Highland Park—old buildings whose new owners clear out tenants in order to make renovations and raise the rents?

What are some of the other—perhaps less visible—impacts to a city in flux? In advance of the Zócalo/UCLA event “Is Gentrification L.A.’s Next Defining Issue?” we asked people who study, write about, and are deeply engaged in this city: What effects will gentrification have on L.A.’s culture, politics, and economy?

Though gentrification gets a lot of press, urban economists generally believe that it occurs in only a small minority of neighborhoods. What affects all neighborhoods, with substantial political and social reverberations, is the multiple-decades-long increase in home prices.

Price increases aren’t limited to hot areas near downtown, but affect renters and owners everywhere across the metropolitan area. Rising home prices mean that a janitor in L.A. likely earns more, but is worse off, than a Phoenix or Atlanta janitor who can pay substantially less for his house. Lawyers and doctors may grumble about higher house prices, but they are more able to absorb rising housing costs than janitors.

Economists generally blame high housing prices on the limits cities put on the construction of new homes. Though the population of Los Angeles Country grew 43 percent from 1970, the number of housing units grew by only 36 percent.

Press coverage about gentrification rightly highlights the slow return of relatively better-off people to neighborhoods in and around city centers. Economists continue to debate causes for this return, but I attribute it at least in part—particularly in Los Angeles—to the ever-increasing time it takes to get anywhere. Relatively wealthy people can avoid traffic by locating closer to work and closer to transit.

When wealthy people locate in areas better served by transit, they are more likely to lobby for transit quality and service. This political activism will help expand the reach of transit in the county for both rich and poor.

Leah Brooks is an economist and assistant professor at the Trachtenberg School of Public Policy and Public Administration at George Washington University.

Long-time residents at risk of losing out in civic process

“Displacement” is a word you hear a lot during discussions of Los Angeles’ rapid gentrification. But one of gentrification’s most under-examined political effects involves long-time residents who stay put in their rapidly changing neighborhoods—and who are less likely to have their voices heard in the city’s most pressing policy debates.

It’s no secret that Los Angeles has struggled to foster civic engagement in recent years. Only 8.6 percent of eligible voters voted in the most recent municipal elections. Recent years’ data has shown that Latino voter turnout is consistently lower than the average. This is especially true of long-time Latino residents in changing neighborhoods like Highland Park, MacArthur Park, or my native Echo Park.

Non-profit organizations have launched efforts to spark Latino civic engagement, but are challenged by the complexity of the redevelopment process, and by their ability to compete with the speed of the changing terrain. The vast majority of opportunities for civic engagement, from neighborhood councils to city commissions, remain difficult to navigate, especially for low-income and Latino individuals who work from sunrise to sunset, or who don’t speak English.

New residents moving into the neighborhood don’t face the same language or time barriers to civic engagement, meaning that they can effectively take over the civic process.

It’s important to examine the impact gentrification will have on long-time residents who are able to stay in these quickly gentrifying enclaves. For many years, they found means to survive economically and be a part of the neighborhood’s social ecology. As our neighborhoods change, it’s vital that we ensure that an already marginalized group of people aren’t pushed further into the shadows by new neighbors better versed in the civic process.

Benjamin Torres is president and chief executive officer of the Community Development Technologies Center (CDTech). He works to address issues of community and economic development in low-income areas of Los Angeles.

The need to respect a neighborhood’s history

“Welcome to Little Tokyo. Now please take off your shoes.” That slogan, referring to a common Japanese practice when entering someone’s home, has been a mantra of community activists in this downtown Los Angeles neighborhood for years. While Little Tokyo has been generally welcoming to new businesses and residents, there is also a concern that the construction of high-rise condos and apartments may erode the integrity of this 131-year-old community that so many have fought to preserve. Newcomers, while seeking to make a home for themselves, may not acknowledge that they have also entered an existing community.

I remember the blighted Little Tokyo of the 1980s, during our nation’s recession and after the economic bubble burst in Japan. Development projects were canceled, homeless people literally died on the street from a record cold, and a temporary shelter was opened in an empty building where the beautiful Japanese American National Museum’s Pavilion now stands. Most of the businesses and shopping malls have changed hands, but not all. In the mid-1980s, a developer proposed to raze the historic First Street North buildings to make way for a shiny new replacement. The Japanese American community mobilized and successfully petitioned for First Street North to become a National Historic Landmark. As a result, we now have a historic block to house Daikokuya, a favorite of ramen fanatics; the preserved neon sign of Far East Cafe, where Farewell My Lovely with Robert Mitchum was filmed; and one of the neighborhood’s oldest existing businesses, the confectionery Fugetsu-Do.

All this preservation and growth came at a large cost to activists and benefactors. Without cultural anchors and places of worship where vibrant festivals and celebration take place, Little Tokyo would not be the distinct community it is today. As it further establishes itself as the nation’s first cultural eco-district with the spirit of mottainai (or sustainability), Little Tokyo only asks that newcomers respect the past and the metaphorical practice of taking off one’s shoes. This philosophy represents the sensitive balance of gentrification with an acknowledgement of the past sacrifice that others have made to sustain this dynamic downtown neighborhood.

Naomi Hirahara is the Edgar Award-winning author of the Mas Arai and Officer Ellie Rush mysteries. A former editor of The Rafu Shimpo newspaper, she has also written and edited several books about the Japanese-American experience and regional agricultural history.