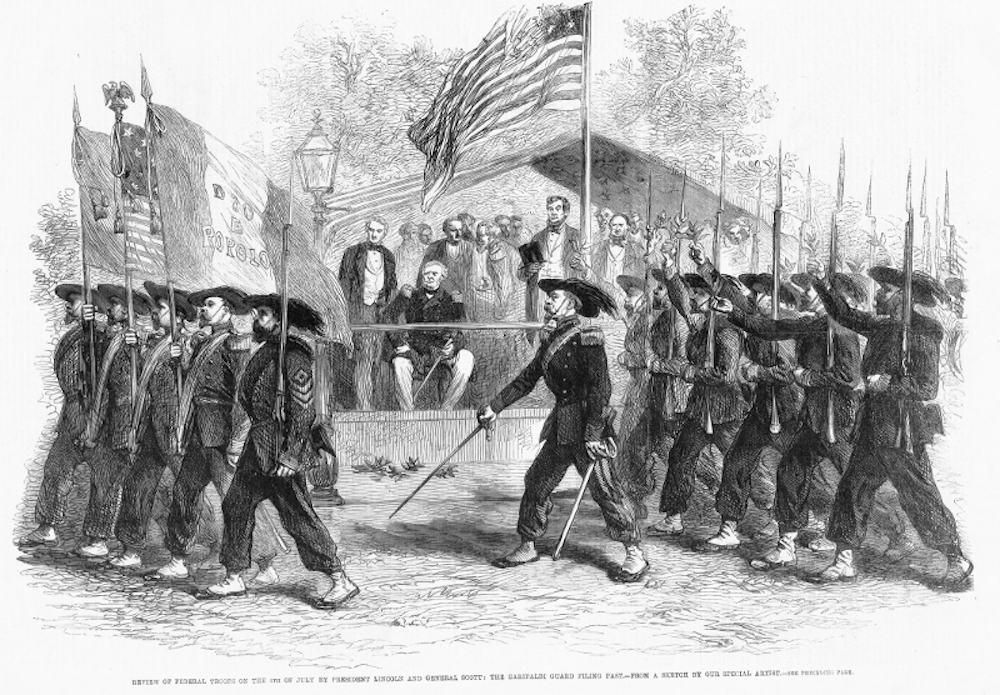 In the summer of 1861, an American diplomat in Turin, then the capital of Italy, looked out the window of the U.S. legation to see hundreds of young men forming a sprawling line outside the building. Some wore red shirts, emblematic of the Garibaldini who had fought the previous year with Giuseppe Garibaldi and, during their campaign in southern Italy to unite the country, were known for pointing one finger in the air and shouting l’Italia Unità! (Italy United!). Now they wanted to volunteer to take up arms for l’America Unità!

U.S. diplomats posted in countries across Europe and Latin America reported crowds of men showing up at their offices and pleading to enlist in America’s war. Active recruiting violated the neutrality laws of foreign nations and could not be encouraged. The U.S. minister to Berlin finally posted a sign on the door: “This is the legation of the United States, and not a recruiting office.”

Meanwhile, immigrants already in the United States responded to the call to arms in extraordinary numbers. In 1860, about 13 percent of the U.S. population was born overseas—roughly what it is today. One in every four members of the Union armed forces was an immigrant, some 543,000 of the more than 2 million Union soldiers by recent estimates. Another 18 percent had at least one foreign-born parent. Together, immigrants and the sons of immigrants made up about 43 percent of the U.S. armed forces.

America’s foreign legions gave the North an incalculable advantage. It could never have won without them. And yet the role of immigrant soldiers has been left in the shadows and ignored in the narrative of a brothers’ war fought on American soil, by American soldiers, over issues that were uniquely American in origin.

In the 1860s, Confederate diplomats and supporters abroad were eager to inform Europeans that the North was actively recruiting their sons to serve as cannon fodder. In one pamphlet, Confederate envoy Edwin De Leon informed French readers that the Puritan North had built its army “in large part of foreign mercenaries” made up of “the refuse of the old world.” Chief among these dregs of European society were “the famished revolutionaries and malcontents of Germany, all the Red republicans, and almost all the Irish emigrants to sustain its army.”

Embarrassed Northerners claimed the Confederacy exaggerated how many foreign recruits made up the U.S. armed forces—pointing to immigrant bounty jumpers who enlisted to collect the money given to new recruits, deserted, and then re-enlisted, multiple times, thus inflating the numbers of immigrant recruits. The underlying premise was that foreigners were not inspired by patriotic principle and, except for money, had no motive to fight and die for a nation not their own. The accusation was that these were soldiers of fortune, no different from the notorious Hessian troops King George had sent to fight his rebellious American subjects in the previous American Revolution.

It was not true. Immigrants tended to be young and male, so they made up a significant share of the military-age population. But even after accounting for that, they enlisted above their quota. Labor was in short supply and many immigrants left paying jobs to fight for the Union, enlisting long before the draft—and the bounties—were even introduced. They volunteered, they fought, and they sacrificed far beyond what might be expected of strangers in a strange land. The zeal with which immigrant soldiers embraced the Union cause stands in stark contrast to the dissatisfaction among the ranks of immigrant soldiers in the nation’s previous war, against Mexico, when these troops abandoned the field in droves, and some Irish units famously switched sides.

While historians have done an excellent job of retrieving the distant voices of ordinary soldiers and citizens from the Civil War era, these voices almost always belong to native-born and English-speaking soldiers. The voices of the foreign legions remain silent—thanks to the paucity of records in the archives, the language barriers posed to historians, and, perhaps, a lingering bias that keeps foreigners out of “our” civil war.

Why did they fight? What were they fighting for? A trove of recruitment posters in the New York Historical Society provides rare and wonderful hints at the answers to these questions. 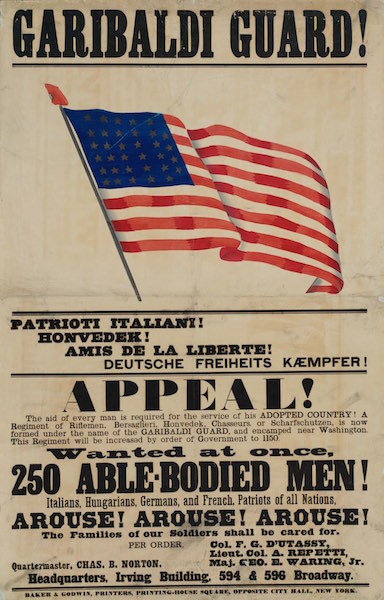 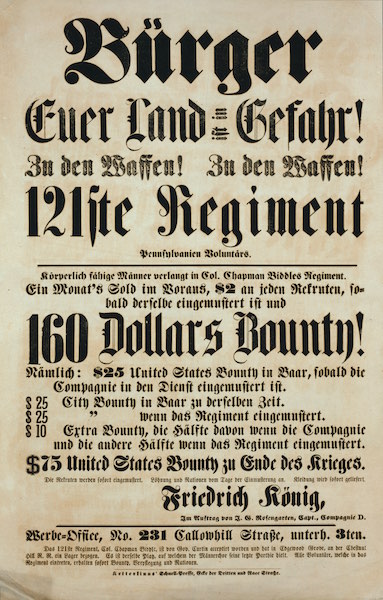 Many of the recruitment posters featured images of soldiers in the colorful Zouave uniforms inspired by the French army in North Africa and adopted by the famous 11th NY Volunteer Infantry “Fire Zouaves” and many other Union units. The soldiers in these posters also wore red banners and shirts, evoking the image of European radicals, or “red republicans.” The Phrygian cap, commonly known as the red cap of liberty, is a soft conical cap that was a symbol of emancipation in ancient Rome and an iconic emblem of 18th century French revolutionaries. The cap was featured on many of the Civil War posters, often worn by Lady Liberty or held aloft on a spear she carried. 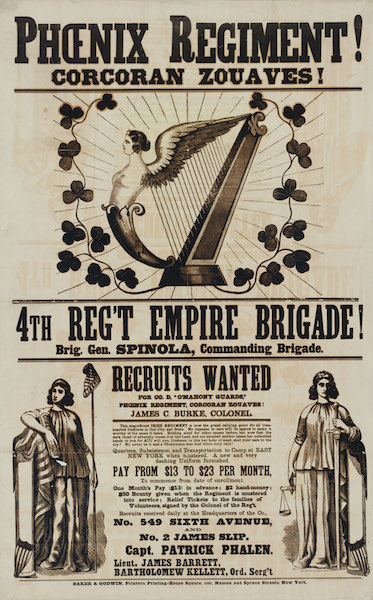 Peter Welsh, a poor Irish immigrant who left his wife and children in New York City to fight for the Union, wrote to his father-in-law back in Ireland in 1863 to explain his motivation:

It “should seem very very strange that i should volunteerly joine in the
bloody strife of the battlefield … ,” he wrote. “Here thousands of the sons and daughters of Irland have come to seek a refuge from tyrany and persecution at home … America is Irlands refuge Irlands last hope. … When we are fighting for America we are fighting in the interest of Ireland striking a double blow cutting
with a two edged sword.”

Welsh re-enlisted in 1864 and died that year from wounds sustained at Spotsylvania in Virginia.

One immigrant mother gave poignant testimony in 1863 to the antislavery Women’s Loyal National League convention in New York as to why her 17-year-old son was fighting for the Union. “I am from Germany where my brothers all fought against the Government and tried to make us free, but were unsuccessful,” she said. “We foreigners know the preciousness of that great, noble gift a great deal better than you, because you never were in slavery, but we are born in it.”

Immigrant soldiers often saw themselves carrying on the battles they, or their parents, had fought in the Old World, and in the stories they told their loved ones back in Europe they employed familiar analogies. In the summer of 1861, August Horstman explained himself in a letter to his parents back in Germany: “Much the same as it is in Germany, the free and industrious people of the North are fighting against the lazy and haughty Junker spirit of the South. But down with the aristocracy.”

Following the failed Revolution of 1848, thousands of young Germans fled to America, many of them with military training in the Prussian army. They now took up arms in what they saw as yet another battle in the same revolutionary struggle against the forces of aristocracy and slavery. “It isn’t a war where two powers fight to win a piece of land,” one German enlistee explained to his family. “Instead it’s about freedom or slavery, and you can well imagine, dear mother, I support the cause of freedom with all my might.”

In another letter written to his family in Europe, a German soldier gave about as pithy an explanation of the war as any historian has since: “I don’t have the space or the time to explain all about the cause, only this much: the states that are rebelling are slave states, and they want slavery to be expanded, but the northern states are against this, and so it is civil war!”

So it was civil war, but for many foreign-born soldiers and citizens, at home and abroad, this was much more than America’s war. It was an epic contest for the future of free labor against slavery, for equal opportunity against privilege and aristocracy, for freedom of thought and expression against oppressive government, and for democratic self-government against dynastic rule. Foreigners joined the war to wage the same battles, in other words, that had been lost in the Old World. Theirs was the cause not only of America, but of all nations.