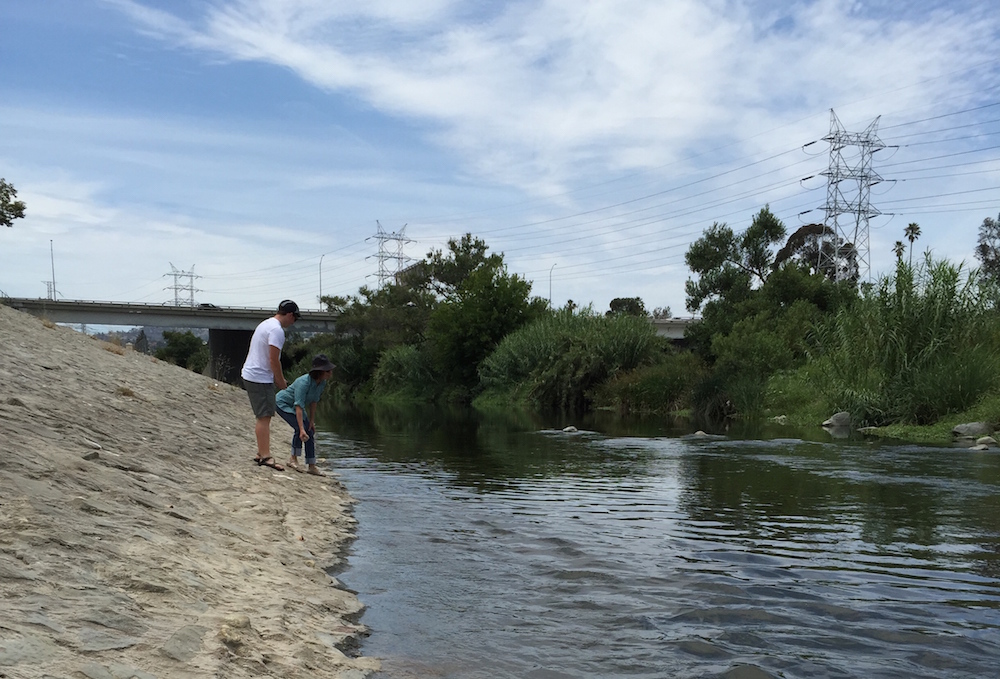 How did I end up spending an afternoon throwing “bombs”—baseball-sized bombs of native seeds—into the L.A. River with a dozen other people? It all started when artist Kristi Lippire, who curated “Witty and Urbane,” an exhibition at Fellows of Contemporary Art (FOCA) Gallery in Chinatown featuring five L.A. artists’ responses to living in our city, asked the artists to take part in an all-day, multi-venue event. Her idea was for us to lead hands-on public activities in different locations across the city on the same day. She asked us to choose a place and create activities that involve how we experience the city and make art. I was all in!

I immediately thought of the Los Angeles River. It moves through the urban landscape in an underdog kind of way, a concrete drainage ditch you see out of the car window from the freeway. But, like the city itself, the river is fluid, continuing to change, and so full of possibility. It’s having a great moment—there is a lot of excitement about the city’s River Revitalization Plan and efforts are underway by nonprofits like Friends of the Los Angeles River to restore the L.A. River habitat.

For my FOCA event, I thought it would be interesting to create an event that added to these restoration efforts, but came from an artistic perspective. I also wanted to organize something that brought people together to interact with the river in a positive and fun way. So I decided to lead a group in launching seed bombs into the river from Frogtown’s Marsh Park.

Through trial and error, I created a batch of nearly baseball-sized bombs made of clay, perlite, vermiculite, and organic seed starter—naturally occurring materials that break down into sand and silt and clay, which is the same stuff you’ll find on the river bottom. They’re tough enough to hold together while rolling down a long concrete embankment, but light enough to float when they hit the water. And of course, they’re biodegradable and begin to disintegrate immediately.

The inside of the bomb is relatively hollow with a small opening on one side—and filled with native cattail, rush, willow, and grass seeds that I purchased from the Theodore Payne Foundation, part of the city’s Native Seed Resource Coalition. The plants that grow from these seeds encourage bird, insect, and amphibian diversity.

Looking at it today, it’s difficult to imagine that the river was once wild and unpredictable, and took the lives of hundreds of Angelenos with its seasonal flood cycles. In the 1930s, the Army Corp of Engineers channeled the river with 3.5 million barrels of concrete. There are only two sections of the 51-mile L.A. River that currently support any type of riparian (river) habitat—where things grow as they did before the L.A. River became a concrete ditch. One is the Sepulveda Basin, a 225-acre wildlife preserve in the San Fernando Valley bordered by Balboa and Sepulveda boulevards. The other is the Glendale Narrows.

The Glendale Narrows area, which is the part of the river I know best, happens to be the only soft bottom stretch of the L.A. River. Living within walking distance of this area, I’ve experienced many moments at the river of breathtaking beauty where the urban and the natural brush up against one another to form something altogether different and unexpected.

The first time I visited the river was about 10 years ago, when I was training for the L.A. Marathon. I entered from the Atwater Village side of the river, east of the Hyperion Bridge. The sound of the I-5 freeway is quite loud there. Discarded fast food wrappers, used condoms, and old clothes lined the dirt path. There was a smell too, like rotten eggs and metal mixed together. When I got to the top, I looked down at the water below and spotted a snowy egret fishing in the middle of the river. I saw lush green islands dotted with snagged plastic bags and groupings of mallard ducks. A line of double-crested cormorants stood on a long piece of metal sticking up out of the water drying their wings. It was lovely and disturbing all at once. I was immediately transfixed by the place.

Since then, I’ve spent many hours running, walking, and making art at the L.A. River. For years, I’ve been making what I refer to as “fake nature,” backdrops (paintings) and props (sculptures) inspired by dioramas at the Natural History Museum. I lug the art out of the studio and into “real nature” to see how it interacts visually in the world—sometimes there’s a stark contrast or there’s a blurring between the two natures. L.A. typically maintains a pretty strict separation between its urban side and the landscape it sprang from—it’s fun to bring the two together again in a playful way. In a world full of so much loss and environmental degradation, the light-heartedness of this work helps me stay sane.

For the “Witty and Urbane” show, I created a piece out of Styrofoam, spackle, and paint based on a rocky hillside in Pico Canyon in Stevenson Ranch. As I was carrying my 4-by-6-foot chunk of copycat nature down to the L.A. River, I struck up a conversation with a homeless man named Troy. In the hour or so we spent together, he shared stories of his life and the river with me. He even showed me some island areas I didn’t know about. One of my favorite photos from that day is of the sculpture standing straight up, seemingly leaning on nothing in a few inches of water. What you don’t see is that Troy is standing behind the piece and holding it up. I see those images as a collaboration between the two of us. 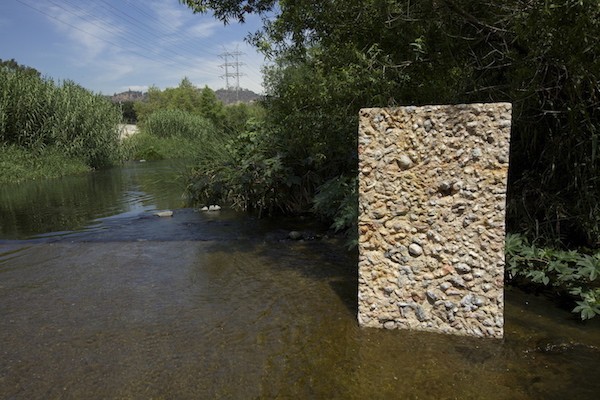 I wanted the event to be collaborative, too. Most Angelenos don’t speak enough to our long-suffering river, so I saw the seed bombs to be a kind of love letter to it. My plan was for participants to fill the bombs with seeds of their choosing and a small slip of non-toxic paper on which they could write a secret message.

The day of the event was uncomfortably hot, but 15 brave participants found their way to Marsh Park. While picking out the seeds they wanted to include in their bombs, people swapped stories about the river and shared a bit about their secret messages—hopes for the river’s future, a goal to spend more time with loved ones, and even lotto numbers. (Hey, why not?)

My favorite part of the day was witnessing all the different ways people chose to bomb the river. It was also the day of the 15th Annual Los Angeles River Ride, so it was a busy day. To start off with, people had to cross a busy bike path in a comical scene that reminded me of the Frogger video game! After surviving the bike path, they had to figure out how to deal with a long and steep embankment that was not easy to navigate. About half the participants stayed at the top of the embankment and rolled their bombs down. The other half braved the steep concrete hill and made their way to the river’s edge. Some people gently placed their bombs in the river, while others lobbed them in. With each bombing, there were cheers of victory and a lot of laughter. 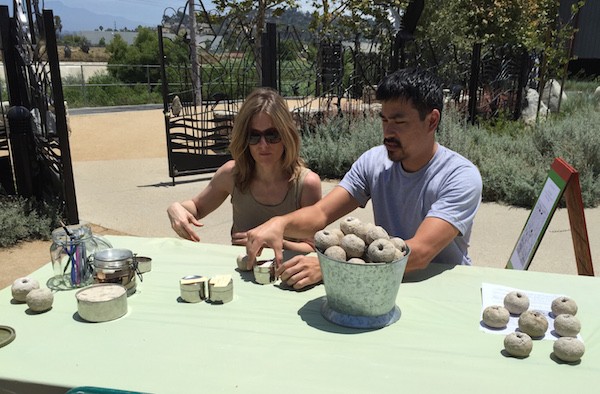 Participants select seeds for their bombs.

The shared experience brought us all closer together and brought us closer to our beleaguered river. We hope that the seeds we tossed will end up taking hold and sprouting—just like the new ideas we exchanged and the connections we made with one another and the river. I believe this is what art does best.