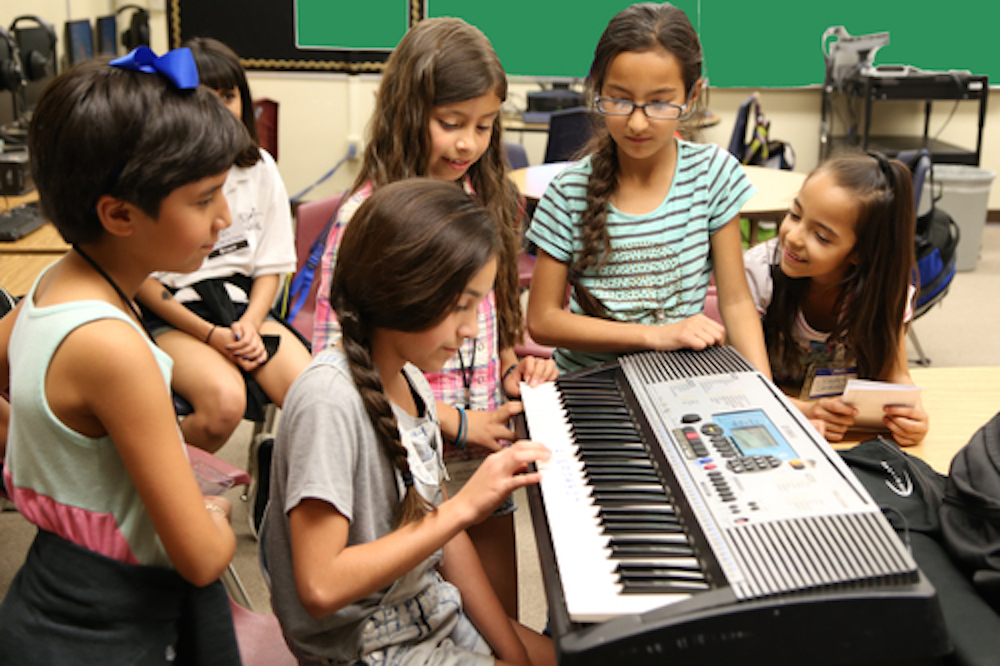 What happens when you give Inland Empire kids who dream of making music the space, instruction, and technological tools to do so? You can change lives.

For years, my nonprofit, Music Changing Lives, has offered youth in Southern California an hour a day in a professional studio—with industry standard technology—so they can learn to compose, mix, master, record, and produce their own music. We make this technology available at our headquarters at the Redlands Community Center and in other school sites and community centers throughout the Inland Empire. Our impact has grown quickly—we now offer a similar program to kids interested in art and design and we’re working to expand our programs in other communities from Los Angeles to Fresno and even Rio de Janeiro, Brazil.

I started Music Changing Lives in 1998 because, not very long ago, I was an Inland Empire kid trying to make music that got noticed.

I was born and raised in Altadena, but my family moved to Moreno Valley when I was 14 years old, after I lost my cousin to gang violence. In our household, we did two things: truck driving (since my dad was a driver) and music. My older brother, a hip-hop artist known as Won-g, was a rapper and producer. By the age of 13, I was helping him and other musicians sell their music on the street.

I became a very successful street promoter. But I saw firsthand how hard it was to make a career as an independent artist—because there simply wasn’t the infrastructure needed to make and promote music.

I thought, there has to be a better way. So I began to sell our music to people lining up at record stores and retailers, and I did that so well the stores and retailers offered to carry our music. My family also built a recording studio in a downstairs bedroom of our home in Moreno Valley and opened it to local youth, including former gang members. The rule was that as long as you refrained from gang-banging and drugs, you could work with us. Many aspiring artists seized the opportunity; we had as many as 20 musicians under us at one time, at all hours of the day and night.

At my mother’s urging, I formalized our operation by creating a foundation called Music Changing Lives. I was making my own music, too, and in 2000, I released my first record, Verbal Biography, and donated 50 percent of what I made to the foundation. We also attracted sponsors and supporters that allowed us to become financially independent. The most crucial support may have come from Wal-Mart, which allowed us to sell the CDs made at Music Changing Lives in the front of their stores across Southern California.

We got so big that in 2008, I started looking for a building for Music Changing Lives. That search led me to Redlands, where I found what would be the new home for the organization. I met with the head of the community center, the mayor, and the police chief, whose support was the golden ticket I needed to launch Music Changing Lives and give youth a real opportunity to create music.

In 2009, they gave me a six-month trial to see if I could bring in kids; we only had three kids at first, but soon the studio was filled. The studio is a place where kids, 8 years of age and older, can come and work with our engineers to learn how to produce, mix, master, record, or track their own vocals.

Now in 2015, we serve more than 350 youth, have 40 part-time college staff members, operate in three community centers in Redlands, Fontana, and Moreno Valley, and work with several group homes in the area. We also established a partnership in 2012 with the Moreno Valley Unified School District, where we offer a robust afterschool program at two elementary schools and one high school for six months out of the year. The afterschool programs offers students tutoring, homework assistance, visual arts, dance and music lessons (including piano, strings, and the recorder), and music production, of course.

Our programs focus on keeping kids off the streets and focused on school. We work with students not only to give them a creative outlet, but also to improve their GPA, attendance, and overall school performance.

You can see youth come through our doors and make huge strides. Franklin, a student who came to Music Changing Lives in 2010 when he was a high school freshman (he auditioned the song “Love You Down” for me), has managed to complete one album and many other songs for an upcoming album. He’s learned live performance techniques and how to hold his pitch when singing – and he’s worked on giving interviews. “Before I did not like openly speaking with people about anything that pertained to my lifestyle,” he wrote, “now I humbly look forward to every opportunity that presents itself.” Now 21, he is now studying audio production at the Art Institute of California and is expected to graduate next month.

Today, I spend about 80 percent of my time working on Music Changing Lives, much of it seems to be fielding inquiries from other places that want us to work with them, like Perris, Los Angeles, and Fresno. Earlier this year I was invited by a Fresno county supervisor to speak about Music Changing Lives to their gang task force, and now we’re talking about bringing the program there to help reduce the number of people who are in gangs.

We’re also building an international presence. I started a division of the program at an orphanage in Haiti after the earthquake in 2010. I’m Haitian-American, so after the earthquake I felt obligated to go to Haiti and provide relief supplies—and music, to bring a bit of joy to the children who had suffered so much loss. And after performing in Sao Paulo, Brazil, at the Campus Party, an annual week-long, 24-hour-a-day technology festival, I was asked to try to bring Music Changing Lives there, and we are working out the logistics to make this possible.

I feel very fortunate to have seen so many lives changed and inspired, but I’d like to see more. I’d like to serve youth nationwide. Music Changing Lives reminds me over and over that music and art are the only languages that are universal. And it’s true that when you show someone genuine love, and provide the tools needed to realize his or her dreams, you get a genuine response back.