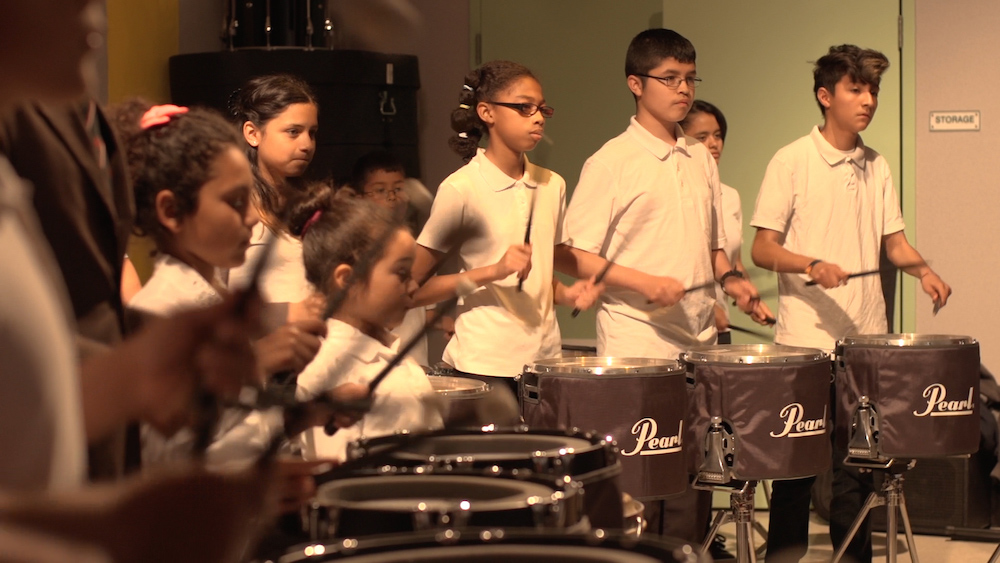 Around 7 p.m. on June 10, the Alisal Union School Board was finishing up its meeting at the Jesse G. Sanchez Elementary School in East Salinas when the drummers took the stage. They were elementary school kids, their hair neatly slicked back by their moms, wearing white shirts, and holding their sticks high. From the audience, a few parents waved, but that only made their kids’ expressions more serious and intense.

There was a focused moment of silence and then the little girls in the front row began hitting their big drums: boom boom boom. The other drummers joined in and the rhythm got complicated and bits of melody started to bounce around. A tiny kid arched backwards to strike his cymbals. The room was so filled with the sound and presence of the drums that when the music suddenly stopped and the kids raised their sticks in the air at the same time, we all sat in pounding silence.

The school board and the audience clapped wildly, of course. And they clapped for the next two groups of elementary drummers who had also been top scorers in the weekend’s drumline contest. For 10 minutes or so, Alisal was not a struggling school district worried about test scores and the fact that virtually all of its 8,000 students qualify for free or reduced lunch, but home to these amazing, commanding, loud kids.

Superintendent John Ramirez stopped the meeting to remember when the drum program started. Local drum enthusiasts Javier Tamayo and Joshua Alfaro offered to teach drum classes to kids at the afterschool program for the 2013 to 2014 school year. “This guy can’t sit still, “ he said pointing at Alfaro, who was dressed formally, but looks much younger than his mid-thirties. “Without them it wouldn’t have happened.”

They started with 20 kids; the group’s summer program in 2013 had 80 students; when school started they instantly had 400 students. By Christmas, the school district had chipped in to buy a new drumline. Now they work with around 600 students, and are likely to expand to 1,000 kids this August. Each school now has its own drumline, which required a significant investment from the school. In Alisal, it seems, nearly everyone wants to bang on a drum. Alisal High School just hired its first full-time music teacher since the 1980s, as has La Paz Middle School.

After the performance, Alfaro was in constant motion. He herded the kids out of the gym, getting them to pick up drums and follow him. Some kids said goodbye and left, while others stayed to practice with the Latin Jazz Ensemble. Alfaro had them sit on a stone fence while he wheeled out the new laser printer, mentioning that Alisal Percussion had received a grant from CHISPA, the county’s large non-profit housing developer, and had bought a $300 printer to print music economically, so that the kids wouldn’t have to memorize everything. This brief finance lesson, as much as the many hours of focused practice that Alfaro has done with Salinas kids, is part of the whole message of the drumline: Drumlines are more than drums; they are a community and a way of life. As soon as the talk was over, the kids split up. One group went to practice drums with Barry Capiaux. The other went inside to practice violins with teacher Christela Pulido.

At the elite level, competitive drumlines are typically found in schools with large bands and big budgets, capable of spending on instruments, musical training, choreography, elaborate uniforms, and travel. Alfaro says they tend to hit the same well-heeled, discipline-centered demographic that goes for gymnastics and figure skating.

“You don’t see many at-risk kids doing drumline,” he said. “You have to have that mixture of moral and financial support.”

Alfaro started playing the violin with his siblings when he was in fourth grade and then learned to play the drums in the church band—the pastor exhorted him to stop making mistakes during the service.

“I don’t know why I loved the drums, I just did,” he says, “and I was a squirrely kid and percussion gave me a way to focus.” His high school, Granada Hills, had a massive marching band, which he joined. From there, he migrated farther into the drum world playing with the Burbank Black Knights, and eventually landing a coveted spot with the Santa Clara Vanguard, a nationally ranked drum and bugle corps, when he was 21. He moved the Bay Area and painted houses to devote his life to the corps, aging out at 22. From there he went on to teach percussion, and even ran a restaurant, before moving to Salinas in 2012 to be with Pulido, his fiancée.

After growing up in the melting pot of L.A., coming to Salinas felt like going back 30 years in time, to a more segregated California. The very structure of East Salinas struck him as “a work camp,” with the walls around the small communities of houses on Sanborn Street keeping residents apart. “It’s like they’re stuck there.”

Alfaro saw drumlines as a way to get unstuck, a way to build children so they could focus their attention, accumulate the experience of trying and succeeding at new tasks, and to see the world beyond Salinas. “With drum corps, you can feel it,” he said. “It’s loud!”

So one evening Alfaro walked over to the Alisal Fine Arts Center to see Tamayo, and volunteered to work with the first 20 kids. The small group quickly grew and then they began working with schools. They bought a rundown party van to haul the drums around for $700. The kids showed up, focused for an hour, and now you can see them air drumming when they listen to music. The 600 kids they’re working with now are performing with drumlines and various ensembles ranging from Latin jazz to rhythm and blues to reggae. And with the addition of school music teachers, it’s become a whole movement. Last year, some of the drumline kids went to Stanford to watch a drumline competition; in July, another group went to compete in Elk Grove.

There are lots of studies that suggest that music education helps raise test scores, I.Q. scores, language skills, coordination, and other good things. That’s true, but music is also an end in itself. And Alfaro sees the drumline as a model for breaking down the world’s toughest tasks—how to learn a riff, how to spend a day, or how to fight income inequality—into small, achievable challenges.

“The drumline holds the kids accountable. They have to walk in a straight line. They have to stand at parade rest. Every day we hit small goals and that has an emotional payoff, ” he said.

And as much as he wants to see a musical culture take hold in Salinas, he also wants the kids to be good at understanding money. This explained why he had taken the time to discuss the cost and benefits of the laser printer with the kids. “It doesn’t make sense to train musicians if they’re going to be flaky about accounting,” he said.

In the next few years, Alfaro wants all the music programs to be on a yearly calendar, so every kid is aware that they’re preparing for the Veterans Day Parade, and then the Christmas Parade, as well as regular concerts, and competitions in the community. “When they see something with momentum that’s organized and loud, they see that the community is headed in the right direction.”

The night I visited, the Latin Jazz Ensemble kept practicing in the dying light. They were in the early stages of learning a complicated song. The violins were practicing four measures over and over, preparing for an eventual saxophone to come in. The drummers were talking about how to emphasize a beat.

Just before Alfaro went to buy the ensemble pizza, three of the younger girls wanted to walk home. Even though the school feels like a charmed spot, the neighborhood around it is dangerous, particularly after dark. Alfaro didn’t want them walking alone, so he began calling their parents.

“Some kids have support at home,” he said. “Some kids don’t have that support and they’re on their own. But we’re here every day.”