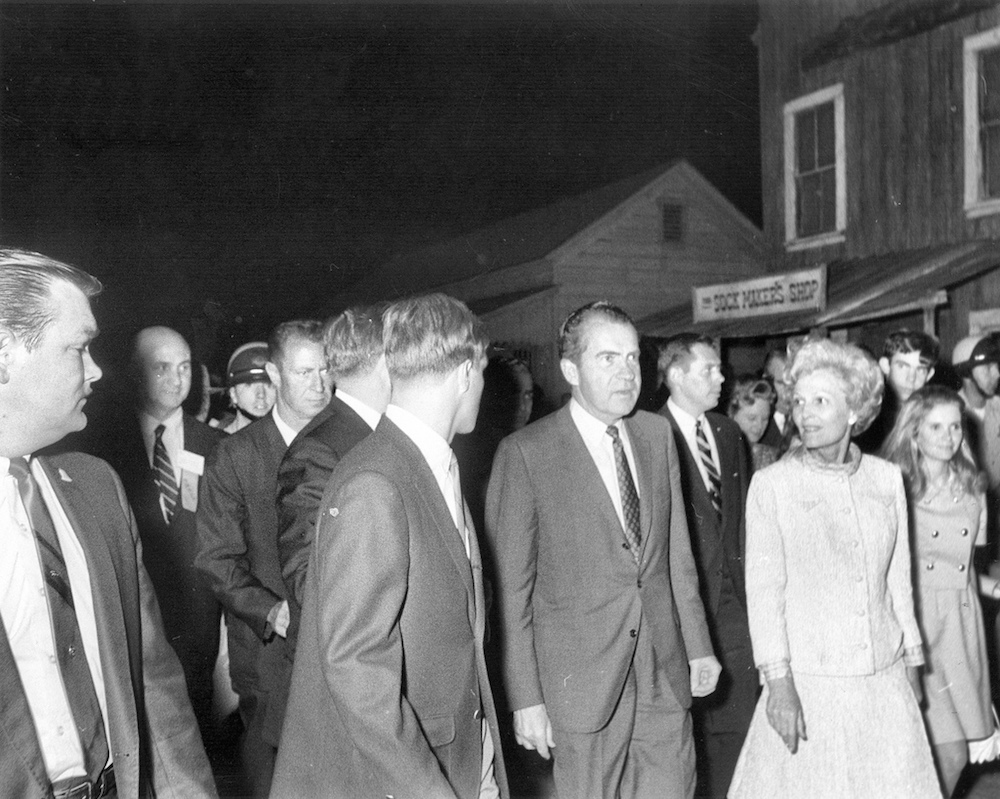 Richard Nixon saw himself as a true patriot, and he considered it his patriotic duty to strive to overcome his darker impulses and moods to exude an upbeat, optimistic outlook—an outlook he considered quintessentially American. He often didn’t succeed, but it was this struggle that made Nixon so relatable to what he called America’s silent majority. Most of us who aren’t natural-born, back-slapping politicians have also been there, struggling against our own shades of negativity.

Whatever you think of his deeds in office, Nixon’s patriotism was undeniable. He was the first president to put an American flag pin in his lapel. In the evenings, he liked to cruise on the Potomac on his presidential yacht, the Sequoia. Nixon insisted on playing the national anthem over the Sequoia’s loud speakers as the yacht anchored off of Washington’s tomb at Mt. Vernon. After a few drinks during the invasion of Cambodia in May 1970, Nixon stood on the yacht’s foredeck, and, as the Start Spangled Banner played in the evening stillness, cried out, “Louder!”

Nixon, who loved spectacles and rooting for the home team (on the White House tapes, you can hear him yelling at the TV during ball games), could be boyishly enthusiastic about his country. When Americans landed on the moon in July 1969, Nixon decided to fly to the middle of the Pacific to board the aircraft carrier that recovered the astronauts. “P was exuberant, really cranked up, like a little kid,” wrote his chief of staff, H.R. “Bob” Haldeman in his diary, referring to the president. Nixon celebrated the moon landing as a great American triumph, a symbol of American can-do spirit. Of course, as a vote-seeking politician, he also wanted to bask in the reflected glory. His visit to greet astronauts was code-named “Operation Moonglow.”

Nixon, being Nixon, also had a darker side to his patriotism. He was a politician who knew how to exploit resentments, partly because he felt them so freshly. In 1968, and even more so during his 1972 re-election campaign, he ran on respect for the flag. His not-so-subtle message was that the East Coast liberal elites disrespected the country, not only the draft resisters who burned the flag, but the editorialists and columnists who questioned American purpose and honor in “staying the course” in Vietnam. Nixon had been condescended to by these same elites. He believed, with some reason, that the so-called “Georgetown Set”—populated by liberal Ivy Leaguers who read The Washington Post and The New York Times—had vilified him ever since he exposed Alger Hiss, a Harvard-trained lawyer with impeccable establishment credentials working in the State Department, as a Soviet spy in 1948.

Nixon used respect for the flag the way gangs use respect for their colors—to inspire fear and assert dominance. He shamelessly tried to castigate anti-war protesters as somehow un-American—as weak, if not traitorous. In a particularly lurid passage penned by his speechwriter Pat Buchanan, Nixon argued for the invasion of Cambodia (or “incursion,” to use Nixon’s word) by making it a test of American manhood: “If, when the chips are down, the world’s most powerful nation, the United States of America, acts like a pitiful, helpless giant, the forces of totalitarianism will threaten free nations and institutions throughout the world.”

Nixon’s proposition might have been valid, but to use this sort of bullyboy rhetoric against antiwar protesters was shameless. A few days after he gave this speech, Nixon was appalled—and felt guilt—when national guardsmen shot and killed four protesters at Kent State University in Ohio. In his memoirs Nixon wrote, “Those few days after Kent State were amongst the darkest of my presidency. I felt utterly dejected.”

Nixon could be falsely heroic and needlessly polarizing in his patriotism—he played the paranoid style in American politics, as Richard Hofstadter put it. But I believe his struggle to remain upbeat in the face of personal and political adversity made him seem more human, fragile even. He often felt aggrieved and put upon, embattled in an unfair fight against those glamorous, spoiled, underhanded Kennedys. He resented birth and entitlement and felt, justifiably, that he had worked his way up, that his victories were hard earned. In law school, he had earned the reputation for having an “iron butt,” for grinding his way past the more privileged kids. On the campaign trail, he overcame his shyness by preparation—by memorizing names and faces—and by his willingness to work hard for other politicians.

Though naturally gloomy, he wanted to be upbeat. He struggled against his dourness by writing notes to himself at night, describing the man he wished to be—“joyful” and “serene.” He rarely was, but he tried. His daughter Julie remembered how he would come though the front door at night with a jaunty little whistle, put a show tune on the record player, and turn on all the lights.

He could not be as happy as he wished to be, not nearly so. But his private efforts were poignant. Right after the Cambodia incursion and Kent State, he stayed up most of the night and suddenly decided to visit the Lincoln Memorial with his valet, Manolo, and the secret service trailing nervously behind. Nixon engaged a few sleepy and agog anti-war protesters, who later, interviewed by reporters, mocked him for talking about football and surfing. Actually, Nixon had mostly tried to talk about the search for meaning in life to these uncomprehending kids. The pre-dawn scene was too bizarre, and the generation gap was too wide, for him to pull it off. He just didn’t have the charisma or grace; he was too stiff and self-conscious.

And yet many Americans identified with Nixon. As Tom Wicker wrote in his biography of Nixon, One of Us, Nixon appealed to the American values of striving, of never giving up, to the hopes of ordinary men and women that by hard work, grit, and faith in their country and themselves, they could accomplish great things. Nixon ultimately was an American tragedy. His paranoid side won out, and by hating his enemies, he guaranteed his own self-destruction. Still, he loved his family; loved his country; kept a personal faith; and when he failed, and failed again – the last time spectacularly – he kept on trying, right to the day he died. In 1968, he had run as the New Nixon, seeking to re-invent the upstart, glowering, demagogic Nixon as a quietly authoritative, mature man. His re-invention was not entirely convincing, but he did win in a close three-man race (against Democrat Hubert Humphrey and independent George Wallace). And if he would need to keep re-inventing himself, what could be more American?