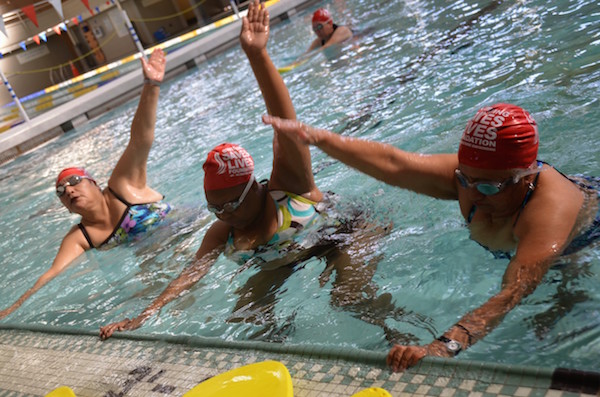 I work in North Richmond and the Iron Triangle as the Community Wellness Coordinator for YES Nature to Neighborhoods, a nonprofit that strengthens local families by taking them out into nature. These are hard, violent East Bay neighborhoods, full of vacant lots and run-down houses, with Chevron’s refinery always puffing away on the horizon. I work with 20 “Wellness Navigators”–women leaders who are learning to guide their families, neighbors, and themselves toward better health. Our goals are to get 200 minutes of exercise each week, have weekly conversations about diabetes, asthma, and other chronic health issues, and do workshops on nutrition. But creating a healthy community is a complicated process, and I want to tell you what the Navigators and I found when we went to the swimming pool together.

The Richmond Plunge is one of the most beautiful indoor swimming pools in the nation, and at $5 for a day pass, a visit is cheaper than a Big Mac. It is right in front of a major bus line. But most of the black and brown Richmond residents I work with don’t think the Plunge is for them. At most, they might take their kids to the Plunge once a year on a Saturday Family Swim Day, and if they are brave enough to wear a bathing suit, they will splash around in the shallow end. Almost no one—parent or kid—knows how to swim, and no one is going to the deep end.

Fear of the water, fear of being out of place, and fear of looking foolish get transmitted from parent to child. These barriers add up to an unhealthy community, where large groups of people might suffer from obesity, depression, fear, and distrust.

But that’s not the only barrier keeping certain people from the Plunge. There’s a lack of money and time. And beyond that, there’s a lack of motivation—feeling isolated and stuck in your neighborhood, your body, and your situation. Fear of the water, fear of being out of place, and fear of looking foolish get transmitted from parent to child. These barriers add up to an unhealthy community, where large groups of people might suffer from obesity, depression, fear, and distrust.

I started as a community organizer in Richmond nine years ago. I come from a similar background to many of the people I work with: I am an African-American parent, and I’ve been on my own since I was 18. I know how little things can be a big hurdle. So, I had been building trust with the Navigators for six months, doing things like driving one woman around to get the documents she needed to sign her kids up for school.

When the community nonprofit Richmond Swims got a grant to offer adult swim lessons and chose the Navigators to be the first participants, I did my best to help the Navigators clear the hurdles. I helped the ladies fill out the paper work. I got some fees waived. I promised rides to get them to the Plunge. And for three months before the lessons started in October, we talked about them, learning who loved the water (two women), who didn’t mind walking around in the water (a few women), and who was deathly afraid of water because of a traumatic childhood experience (a few more).

On the first day we all went into the locker rooms and changed into our suits (mostly provided by Richmond Swims, along with swim caps and goggles for everyone), passing the women from the Masters Swim training, who were toned and strong in their Speedo racer suits. Our little group was feeling shy, our mom bellies pooching out. The Latino ladies were trying to get their long hair in the caps, and the African-American ladies were wearing two caps, to make sure their hair did not get wet.

When we walked out on deck, I was surprised to see that we were the only ones in the pool besides the lifeguards and Coach B, our instructor. We could relax without being distracted by kids splashing or people staring. Coach B asked us to sit on the edge of the pool and put our feet in, kick, and slide in. She had us walk the length of the pool, and finally we held hands in a circle and bobbed our heads under water. Holding hands was key. The ladies who were not afraid to go under were able to support the ladies who were. 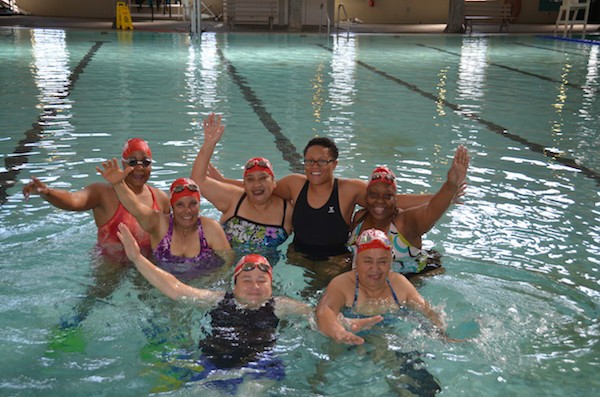 One woman was deathly afraid: getting in a pool was Gloria’s worst nightmare. She is about 70 years old, and she also suffers from depression. On that first day, just walking the length of the pool was terrifying: She was crying and shaking. Coach was on one side of her, and her sister was on the other, and they were practically carrying her. I didn’t think she would stay in the water, but she did. She walked across the length of the pool again and again, becoming less afraid each time; all the while the Navigators cheered her on. At the end of the first lesson, no one wanted to get out of the water. I knew right then that this experience was going to be about more than exercise or learning a new skill.

The pool was a place of vulnerability. We had to allow ourselves to be vulnerable in front of each other and in front of Coach B, a stranger. But would Gloria have stepped into the pool on her own? Would any of us have done it on our own? No, but together we were a team. By going to the place of her deepest fear with the group, Gloria also was able to believe that she was not alone at a school meeting with the principal for her grandkids, or talking to the housing agency.

Everyone came back for the next lesson and the next, and many completed not just the six we had originally signed up for but 18 lessons. At the pool they had to let go of the edge, to put their heads under water, learn how to float. What would happen if they trusted the water to hold them? The unfamiliar is scary. Getting rid of a barrier is scary, because it also means an excuse is gone. The Navigators could now say yes to the pool, the beach, the lake. Having one more thing to say yes to means there is a greater chance you will say yes to the next challenge, be it lose 20 pounds, or learn to read, or send your child to sleepaway camp.

A year later, at a camp for caregivers and their families run by YES, I could see how our time at the Plunge had changed not just the Navigators but their families. At a swim lesson taught by Coach B, the women got in the water with their children, swam, and helped their children learn to swim. They were no longer sitting on the sidelines.

This past year, Navigators have signed up to go back to school, and are teaching everything from diabetes workshops to ZUMBA classes at their local school. They are going to Richmond Food Policy Council meetings and addressing school board members at district meetings. That’s what a healthy community looks like—no longer isolated, or afraid—everyone jumps in the pool.