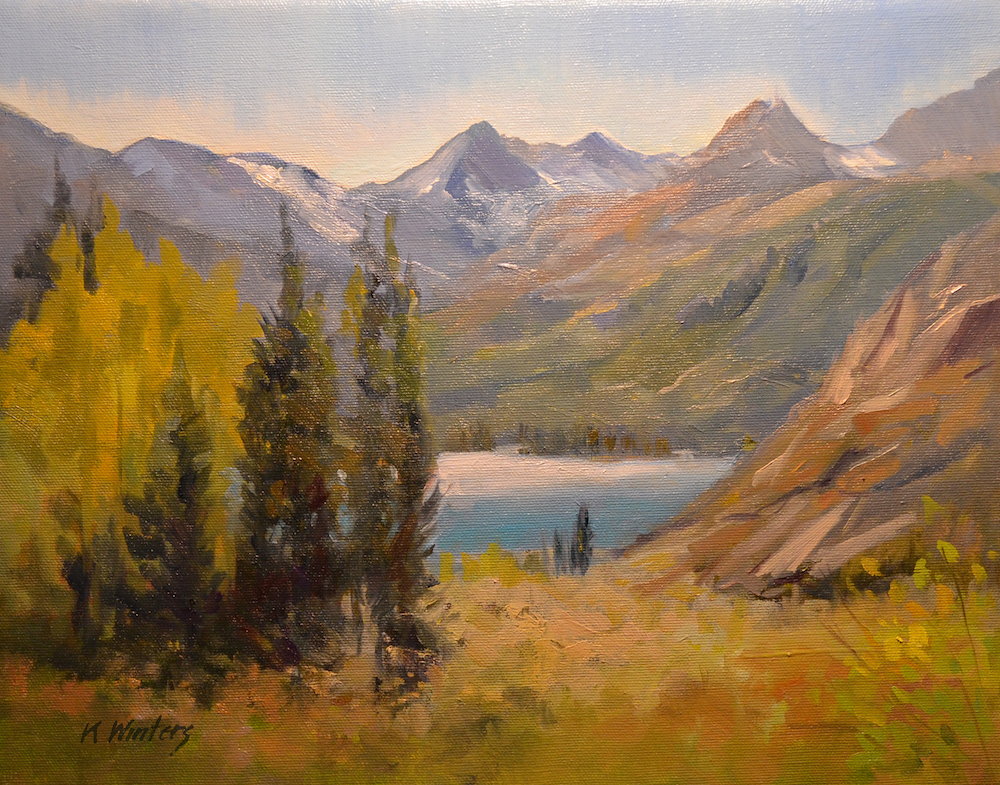 As an outdoor landscape and seascape painter, I’m used to seeing places change over the years. I painted a stately cottonwood tree on an Owens Valley country lane in the fall of 2010, its golden crown contrasting dramatically with a cerulean blue sky. A recent trip found it vanished, the victim of a brush fire.

A traveling painter learns to seize the moment with pigment and brush, because it may not look the same on the next visit, or even an hour from now. Old, charming buildings are torn down and replaced by condo complexes and picturesque barns collapse into rubble. In a way, that is part of the appeal of doing what I do; I interpret a unique and fragile bit of time and space through the medium of paint.

The Greek philosopher Heraclitus wrote, “You cannot step in the same stream twice.” But what we are facing now in drought-stricken California are streams that have not just changed; they have utterly disappeared.

I started out as a studio painter, but my love of wild places lured me to paint from life, with all the attendant challenges of changing light, wind and weather, bugs, cranky easels, and hard-to-reach locations. Now, as a landscape artist, I paint small “plein air” studies on location to get to know a place well. Direct observation tells me a lot about light and color—more than a camera can. I take these studies, along with sketchbook drawings and photographs, back to my studio in La Cañada to use as inspiration for the creation of larger paintings. 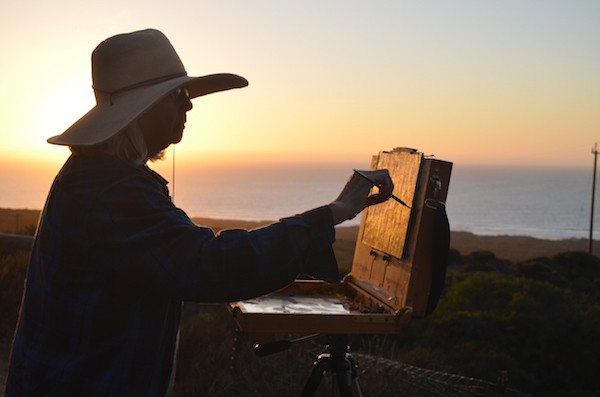 The author painting by the ocean

California has no shortage of attractive subject matter. From the coast of Big Sur to the redwood groves north of San Francisco, from Yosemite’s majestic landmarks to the Central Valley’s rolling golden hills dotted with oak trees—all of these scenes have found their way into my portfolio. But in the last few years, and especially this one, 2015, the drought has thrown me a curveball.

A few weeks ago, in late July, my husband and I drove 22 miles southwest from Bishop to South Lake, in the Eastern Sierra. I had painted the lake a previous fall and wanted to see how it looked wearing summer hues. But the lake was closed to boating for the season due to drought. The waterline was substantially lowered, perhaps by 30 feet or more.

Painting wildflowers is all about timing, as early impressionists such as Granville Redmond and John Gamble, who built their careers portraying California’s flower fields, knew. When will they reach peak bloom, how dense are the meadows, and how long will the show go on? I’ve painted the western Sierra foothills and the Antelope Valley at times when they were heavily carpeted with golden California poppies for nearly a month. This year, although some areas had a good showing, they were blasted by an unseasonal heat wave, which severely shortened the season. I had to adjust my schedule to catch local poppies at their peak. A few days later, they were shriveled and gone. 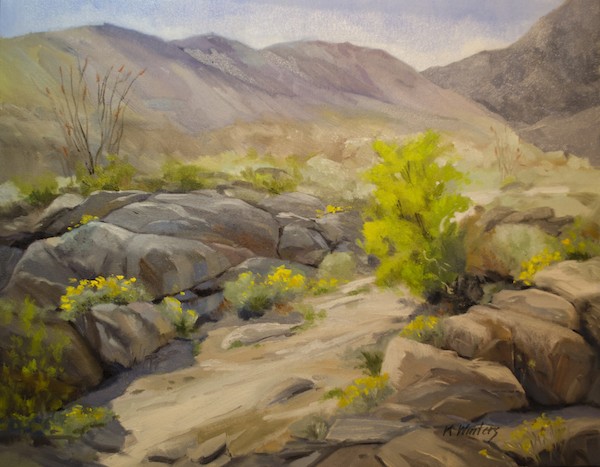 But along with the negatives, the drought has brought with it a few scattered positives. Some of my painter friends who are ambitious backpackers were happy to discover that Yosemite’s Tioga Pass opened earlier than it has in 20 years. The early thaw offered them a unique look at the backcountry terrain earlier in the season. I hope they found more than the ankle-deep trickle I recently saw at the Tuolumne River.

So, that’s the problem. And unless El Niño brings us the snowpack we’ve been desperate for this winter, it’s one that we’ll have to adapt to. What’s a plein air oil painter to do?

For one, I head to the coastlines. As in the winter when there are no fall colors or spring wildflowers to paint, California’s beautiful shores are always appealing. Yes, some of the estuaries show signs of the drought, but for the most part there is still plenty to paint in the tidal areas from San Diego to Sonoma Park State Beach and beyond. Deserts and rocky areas are another option, as their flora and fauna are already more adapted to aridity. Some artists who like to paint buildings may gravitate to cities and urban landscapes in times like these.

Secondly, I pay more attention to nature reports to identify the areas that are less affected. Even though the drought rages on, one heavy winter rain can still make parts of a desert bloom gloriously, as I found this year at Anza Borrego State Park in the Mojave Desert.

I no longer assume that an area will be full of color as it has been in the past. I have to do more research. This is where it’s helpful to be a part of close-knit communities. Painters as well as photographers, hikers, and native plant lovers often know where to find the most beautiful scenery. 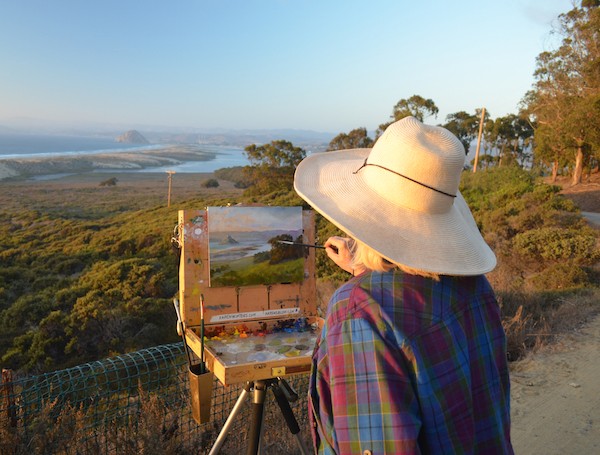 The author painting at Morro Bay

Another strategy is to simply leave California in search of greener pastures. Each area where I’ve painted has its own unique characteristics, and portraying them provides opportunities for experimentation and growth. The light in a region can be affected by many factors, including the color of the land, the amount of dryness or moisture in the air, and the altitude and weather patterns. This year I’ve spent three weeks in Italy (Tuscany was wonderfully green with full lakes), a week around Virginia’s Shenandoah Valley and Blue Ridge Mountains (lush green farmland, with daily showers), and a three-week trek through Nevada, Utah, and Colorado to paint a wedding atop Vail Mountain. In Colorado, monsoon season brought daily thunderstorms and cloudbursts, nourishing some of the most spectacular wildflower meadows I’ve ever seen.

Yet another option is to paint the land in a way that finds art amid the suffering. That’s a taller order, but it’s possible. In the Owens Valley, dry-looking cottonwood trees surrounded by broken limbs cast dramatic shadows. And even parched dry grasses on hillsides have a lovely luminosity when the afternoon light strikes them at a certain angle. Shallow rivers still create reflections. A dry riverbed could be a Zen garden. Beauty can still be found in unexpected ways if we have the patience to look for it.

Of course it’s frustrating to have a more limited range of places to go and paint, and seeing the damage is disheartening. But the inconvenience to me is trivial compared to the toll the drought is taking on agriculture and on communities where water has to be trucked in for bare necessities.

We can only hope and pray that this winter will bring sufficient rain to begin to build back the snowpack that is lifeblood for everyone in this beautiful state.