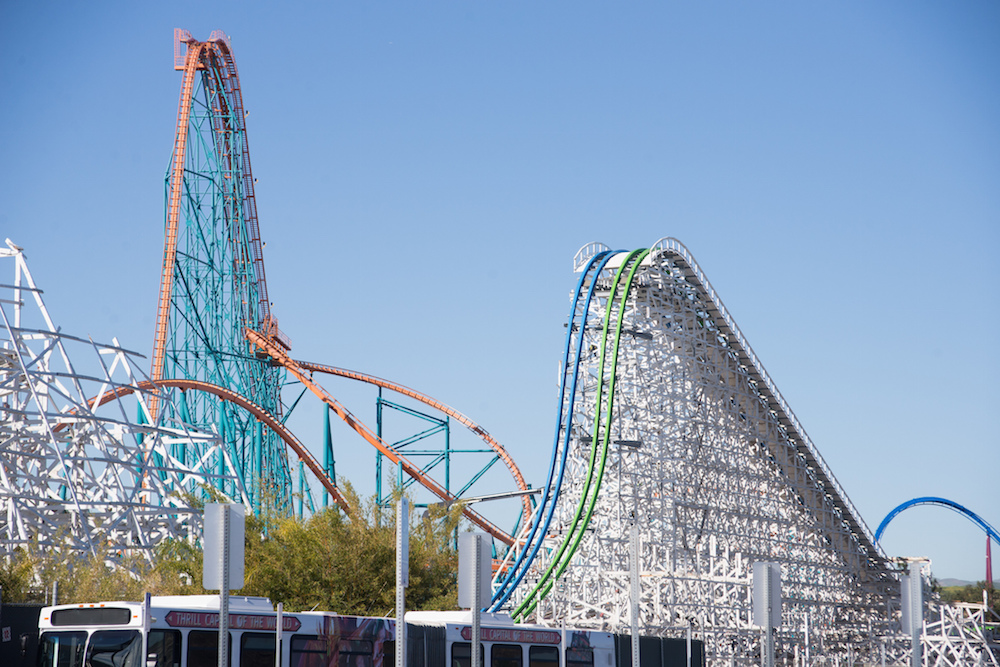 Colossus once was the “King of Coasters.” Introduced at Six Flags Magic Mountain in 1978, the classic wooden behemoth—which reached reported speeds of 62 miles per hour and was the first roller coaster to feature more than one 100-foot drop—was the fastest and tallest on the planet. It appeared in television shows and movies, including National Lampoon’s Vacation, and became an icon of amusement park thrills.

Its time on the throne didn’t last long. Within a couple decades, taller, faster, and flashier coasters made of steel surpassed Colossus. Visitors to Magic Mountain in Valencia, California, would still give the wooden giant a go, but its allure disappeared. The ride began to seem tame.

Wooden roller coasters demand far more maintenance than their steel counterparts, which has led amusement parks around the country to knock down their once-beloved timber relics and replace them with newer rides. Colossus, having lost much of its popularity, seemed like it was facing an uncertain future. But instead of putting the legend out to pasture, Six Flags implemented a new formula that’s beginning to save wooden coasters from what seemed like unavoidable extinction. Today, Colossus lives anew in a leaner, trimmer form known as Twisted Colossus, a “hybrid coaster.”

In 2011, Six Flags pioneered the concept of taking aging coasters and re-engineering them with modern metal tracks—a combination of wood and steel. The theme park chain worked with a coaster manufacturer called Rocky Mountain Construction to reinvigorate New Texas Giant, a record-breaking wooden coaster that had become an aggressively rough ride from years of excessive speeds and Texas heat. The new I-Box steel track transformed the New Texas Giant’s layout by adding dynamic aerobatics, like overbanked turns and dramatically steeper drops. But the footprint and general layout—including the positions of the drops and curves—remained the same. The makeover saved the essence of the wooden ride while still allowing for newer and wilder maneuvers.

To say the hybrid design was a runaway success is an understatement. Roller coaster fans wondered just how good the transformation would be. Upon riding, it was clear—the new version was spectacular. Six Flags and Rocky Mountain have since built four more hybrid coasters, and so far, they’ve been batting a thousand. More are planned for the future. While a few woodie purists miss the rumble and rattle of an authentic wooden track, crowds overwhelmingly love this new genre. Where there were once no lines, park visitors now flock to these extreme makeover projects.

So what makes these hybrid coasters so popular? A few factors are obvious: the smoothness of the track, the fluidity of the design, and the comfort of the ride. But the hybrid makeover affects many riders on a deeper level, as well. Adrenaline junkies who grew up imagining the pinnacle of roller coaster excitement as a hulking lattice of lumber get to feel an attachment to their old ideal and experience a newer, wilder ride. It’s nostalgia meets thrill—a perfect combination.

Twisted Colossus, which opened in May, now is the longest hybrid roller coaster in the world. It also has the unique distinction of being the only hybrid “racing coaster” out there—a design, popularized in the 1970s, that sends two trains out along the parallel tracks at the same time. While the original Colossus always had two tracks that ran alongside each other throughout the entire ride, they were rarely used for racing; the uneven pacing kept the trains too far apart. There was no interaction between trains. No ability to race.

Twisted Colossus changes that. The lift chains on both its tracks work in sync to align its two trains on the initial ascent, so that they take the first plunge together, then interact throughout the entire ride. Rounding the first bend, passengers get to experience something no American roller coaster has ever done before. Dubbed “the high five,” the two trains go through a passage where riders are actually tilted at one another, so that screaming fans can reach toward each other as if to high five. Then, on two occasions, the trains go through inversions, where one train hangs upside down above the other, then spirals beneath it. That’s called “the Top Gun stall,” after the scene in the famed film where two fighter jets pull off the same maneuver. It’s one of the best moments on any roller coaster on this planet.

As as an added “twist,” riders get to experience both tracks. After the first lap, the train steers back to the lift hill with a new trainload of riders for Act II, instead of returning to the station.

For years, the corner of Six Flags Magic Mountain where Colossus sat was somewhat quiet with newer attractions enticing thrill-seekers to other areas of the park. But in 2015, the section was re-themed the “ScreamPunk” District. With creative steampunk décor of brass industrial pipes and gears, and a glossy new paint job on a steel coaster next to Twisted Colossus, the area now oozes cool freshness. It’s where the crowds run to at the park’s opening. And thanks to Twisted Colossus, the area will continue to be a draw. While many new rides tend to be popular for a season, the hybrid coaster is no flavor of the month. It’s a leader in a new wave of construction that appears to be the future of roller coasters.

Six Flags Magic Mountain operates the largest collection of coasters in the world—19, if you count wooden, steel, and hybrid. With that many, it’s a challenge to make each one a different ride experience. That’s why the park’s conversion to new hybrid technology is such a brilliant step toward the future. Riders love the smooth ride and the thrilling acrobatics so much that we’re sure to see even more hybrid designs. And that’s great news for the handful of aging wooden coasters around the country that would otherwise be knocked down.

If Hollywood is any indication, there is success to be found in reviving an old classic. It seems a little ingenuity is doing the same for roller coasters.