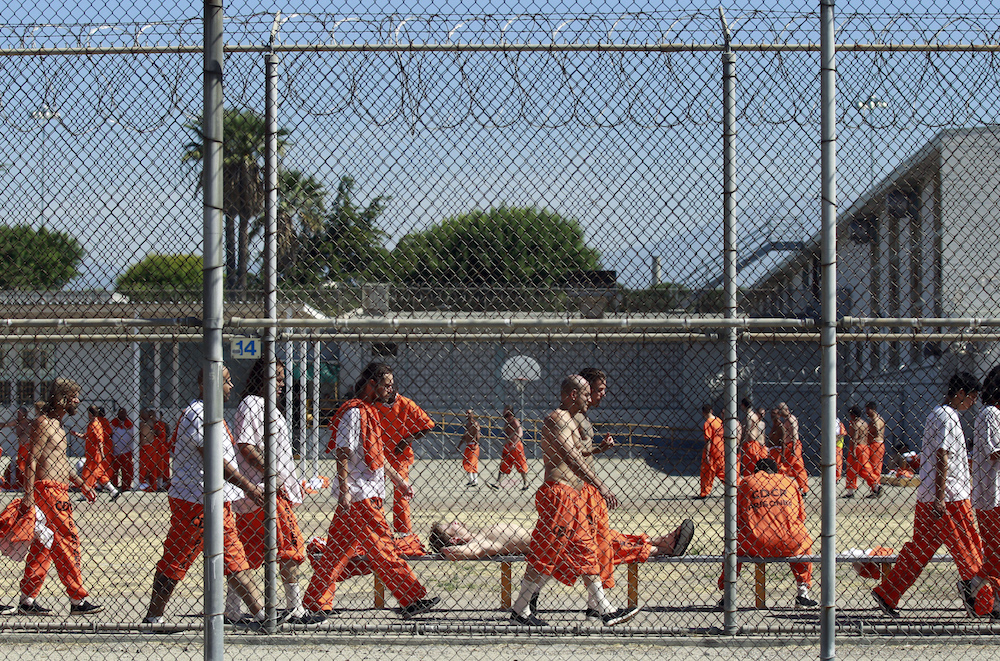 Inmates walk around an exercise yard at the California Institution for Men state prison in Chino, California, June 3, 2011. The Supreme Court has ordered California to release more than 30,000 inmates over the next two years or take other steps to ease overcrowding in its prisons to prevent "needless suffering and death." California's 33 adult prisons were designed to hold about 80,000 inmates and now have about 145,000. The U.S. has more than 2 million people in state and local prisons. It has long had the highest incarceration rate in the world. REUTERS/Lucy Nicholson (UNITED STATES - Tags: CRIME LAW POLITICS SOCIETY) - RTR2N9TX

In California, there are individuals who have been tried, convicted, and sentenced to prison—and gained significant power from behind bars. The sanctions of imprisonment have become the source of their strength and proof of the limits of government sanctions.

That’s the story of the Mexican Mafia.

Today, the gang is mentioned over and over in reports of crime and the prisons, but often without any context, or background. So public ignorance is broad. The Mexican Mafia is not from Mexico and it’s not like the Italian Mafia. It is, instead, a prison gang that is profoundly Californian, a reflection of our state’s history and caste system.

It’s an elemental tale that goes back beyond the Mexican Mafia’s founding in 1957 to the mid-19th century, the westward movement to California. As the value of the land increased, earlier residents (many of them Mexican) were forced to move from their homes to make way for growth and the American Dream of others.

By the 1930s, barrios had formed in communities across California. In these separated worlds, the first street gangs emerged in opposition to police and white violence. Mexican-American gangs like White Fence and Florencia controlled spaces that others could not—playgrounds, street corners, and vacant lots. And their members had each other—and the worlds where they were allowed, because no one else wanted those places. Joining a gang became an identity, a way of defying convention and law. These gangs—and their skirmishes with white gangs who attacked people—helped define the boundaries of communities like Boyle Heights and Ramona Gardens.

In the period following World War II, the world opened for those who had been excluded, at least in some places. Most significantly, the G.I. Bill made education attainable for veterans and prompted the expansion of state universities and community colleges. The foundation for this was the case Mendez v. Westminster, which challenged California’s segregated schooling.

It was these good times that, paradoxically, produced the Mexican Mafia. As opportunities opened up for some, others saw neighbors and community leaders move on and were only too aware they were left behind. Filling this leadership void were the Pintos (ex-cons) returning to their gangs, and bringing with them the culture of the prisons.

This was true of 13 gang members who were facing time at Deuel Vocational Institution, a prison in Tracy (about 60 miles southeast of San Francisco) known as the “Gladiator School.” It was a place where only the worst of California’s youth would be housed. At this time, prison jobs were doled out to the politically loyal, training was minimal, and no one much cared. So the control of the prison yards fell to the Blue-Bird and Diamond Tooth gangs, which were white. But the gangs were not particularly well organized.

That left an opening when the 13 inmates from L.A. entered Gladiator School and began recruiting Hispanic inmates from L.A. The power of this Southern California gang was challenged by others—Northern Hispanics, African-Americans, and white groups.

In response, the L.A. gang members pursued an idea; a super gang that would join together members of various L.A.-area Mexican gangs while in prison. This was not entirely new; traditionally independent gangs such as White Fence, Hawaiian Gardens, Florencia, and El Hoyo Maravilla joined forces while in prison. While these gangs may have been at odds outside prison, inside they had much in common; they had been vetted by gangs, and in prisons faced similar restrictions on their activities, including education and recreation. Their gang membership provided bonds and a support system for importing drugs, gaining information on other inmates, enforcing threats away from the prison, and coordinating violence within the prison.

From its beginning in 1957, the Mexican Mafia grew and prospered—in part because the group was ignored. After all, it represented two of the least powerful groups in California: Mexican-Americans and prisoners. This neglect allowed the group time to gain power in a corrections system designed to control and punish.

No other gang gained the strength of La Eme. Prisoners could be ordered to deliver messages. If they were intercepted, then the prisoner holding the message would accept the punishment, not the sender of the message. Savings accounts for prisoners, which were established by the California Department of Corrections, were used to launder funds.

In the 1970s, the group began its evolution from prison gang to organized crime. Released convicts returned to their homes and gangs, and they began to collect “taxes” from local drug dealers, sending part of the proceeds to the Mexican Mafia. The payment of taxes allowed dealers to sell drugs unhindered and remain alive, and gave cartels a distribution network. All this was governed from inside prison walls.

Rudy Cadena, one of the original members of the Mexican Mafia, took advantage of new federally funded community service programs. After his release from prison, he spearheaded an effort by Mexican Mafia members to enter such projects as volunteers. Then, with a record of service, they offered to participate on the boards of nonprofits and other associations responsible for the program. From these positions, it was easy to take control of the project, hire and fire staff, and loot the designated funds. In a short period of time, community service programs became a cash cow for La Eme.

One example was a Los Angeles program titled Project Get Going. Ellen Delia, the wife of project director Michael Delia, challenged the Mexican Mafia’s involvement, which led to the bleeding of program funds. Refusing to see her work tossed aside, she complained to state and local leaders. But there were no responses. In 1977, she went to the state Capitol in Sacramento with the intent of taking her case directly to the state senate. Her body was found just north of the Sacramento city limits. The senate meeting went on without interruption.

At times, the Mexican Mafia could keep the peace. In 1992, with the streets of East Los Angeles resembling a war zone, Mexican Mafia leader Peter Ojeda called a meeting of gang leaders at El Salvador Park in Santa Ana. In unequivocal language, he ordered an end to the drive-by violence. Anyone who disobeyed the orders would face the possibility of assassination. The carnage ended abruptly. The Mexican Mafia was hailed as a peacemaker in the press. And, in the process, its members had gained control of many unaffiliated gangs.

That growth has been continuous and uncompromising. Its power and reach have only increased. Even the convictions show this relentlessness. Recently, the daughter of an imprisoned leader received a 15-year sentence for her role in guiding a street gang under the orders of her father. In Ventura County, a top enforcer for the Mexican Mafia was sentenced to 27 years in prison, for his attempt to establish a “Mesa” or ruling body of gang leaders.

In all these ways, the Mexican Mafia is a historic success. And quite a story. The streets of L.A. produced a change in power inside the California prison system, which in turned unified street gangs and facilitated the mass importation of street drugs. La Eme’s method was simple. They took youth on the streets and gave them an identity and purpose. They took community programs, and devoured them. They won public support.

They took a system that disregarded them—and made it theirs.