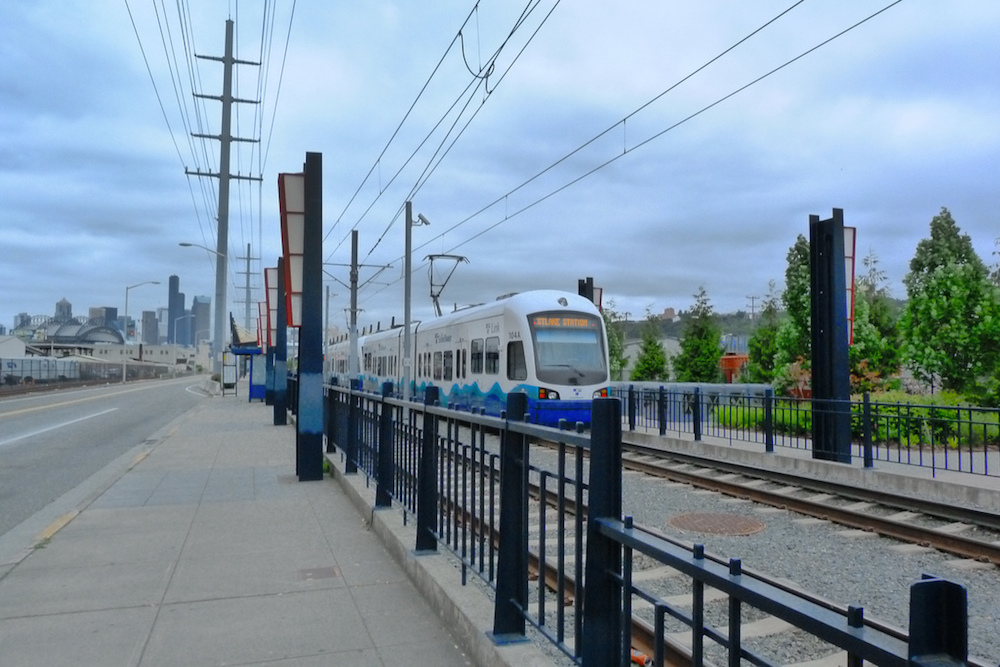 Rail tracks are being laid in the unlikeliest of places.

Houston carries more light rail riders per mile—the typical measure of success—than any other place except for Boston and San Francisco. Meanwhile, Denver is building a light rail system second only to L.A. in size and breadth, and it’s renovating its historic downtown train station in the process.

Such growth follows the success of mature light rail systems in Portland and San Diego—each of which carry more than 100,000 riders per day—and the surprise hit of light rails, Salt Lake City. And almost all of these cities have built, or are building, light rail connections to their major airports.

So is the Sun Belt giving up on cars? Hardly. Most people who live in Sun Belt suburbs still have no choice but to travel by car.

What explains all this construction, especially in the traditionally auto-oriented South and West?

The short answer: Light rail is a lot faster than a bus, but doesn’t cost nearly as much to build as a subway.

“Light rail” is a broad term that means a passenger rail system with tram-style cars—as opposed to “heavy rail” subways, as in New York and Washington, D.C.—that runs on its own right of way, usually at street level. Light rail cars typically run at 30 to 40 miles per hour at top speed, much less than a heavy rail subway.

In many cities, the building of light rail lines represents only one aspect of broader efforts to solve the public transportation puzzle. Cities are increasingly connecting light rail lines with major nodes of activity and other transportation modes such as expanded express bus services or bike lanes. Phoenix’s light rail connects downtown with Arizona State University in Tempe and Sky Harbor Airport. Charlotte has a light rail system and is now adding a streetcar. Atlanta and Miami have traditional heavy rail transit systems but are investing in other technologies such as streetcars and bus rapid transit. Las Vegas has a monorail along the Strip but is talking about a rail line to the airport.

These trends are even causing some cities to rethink huge parts of their urban environment. Dallas built a cap over a depressed section of a freeway and used the space to build the popular Klyde Warren Park. Houston is talking about tearing down a stretch of freeway on the edge of its downtown.

So is the Sun Belt giving up on cars? Hardly. Most people who live in Sun Belt suburbs still have no choice but to travel by car—and all the major Sun Belt cities are planning major freeway construction or expansion. But something else is happening simultaneously. Major urban areas in the Sun Belt are experiencing new and growing demand for housing and activities in their cores. This influx of downtown residents has forced leaders in most cities to change the way they think about their city’s streets and transit system.

Light rail can serve urban residents better than commuter rail and express bus services, which focus on shuttling commuters from the suburbs into urban job centers.
And well-designed light rail systems can be catalysts for the development of denser, more walkable and bicycle-friendly neighborhoods. Since rails require a much smaller footprint than roads, cities have found new space during construction of light rail to improve sidewalks, add bikeways, and create car-free public spaces.

Even in cities like Houston, where local land-use laws and custom have made local government and the transit agency hesitant to directly influence redevelopment, construction has begun to pick up as property owners have finally made land near stations available for new construction. Along the most established section of the city’s Red Line, between downtown Houston and the Texas Medical Center, several new apartment buildings, restaurants, cultural institutions, and mixed-use developments are slated to open in the next year.

Light rail systems have their detractors, who argue that buses can carry people more cheaply, or that light rail investment shouldn’t be used to fuel real estate speculation. Still others say all transportation money should be invested in roads because most people drive most places.

While buses are more flexible, a bus rapid transit line on a separate right-of-way costs almost as much as a light rail line, and the ride isn’t nearly as comfortable. Moreover, all transportation investments fuel real estate investment; that’s why there’s a gas station and a 7-11 at every freeway exit. Light rail lines have the ability to concentrate investment in efficient urban locations. And light rail lines can expand transportation capacity in a crowded urban location at a much lower cost than new roads because their smaller footprint requires less disruptive construction.

There are obvious limits to what light rail and other forms of transit can do for cities that are as spread out as Sun Belt metropolises. But, rather than focusing on the conflict between highways and transit, it’s more important to focus on how to weave these elements together to create the best possible transportation systems. Roads and rail are just different parts of networks which, if built cohesively, can provide interconnected, intermodal mobility in the urban cores and the peripheries of even the most sprawling metros.

That’s the mindset with which people in Sun Belt cities are approaching rail. At the same time that L.A. is expanding its light rail lines, Mayor Eric Garcetti has proposed a new strategy to repurpose boulevards around the city and areas along the L.A. River into pedestrian- and bike-friendly spaces. And as Houston expanded two light rail lines this summer, it completely revamped its bus routes, vastly increasing transit accessibility for hundreds of thousands of residents at no additional cost. Salt Lake City and other Utah municipalities are taking an innovative regional approach to transportation by jointly building a system that combines regional highways, rail, streetcars, and bus rapid transit—buses that run at least partly on their own rights of way.

If you look carefully at the auto-bound cities of the South and West, you’ll see that leaders and residents are considering metro transportation networks that serve drivers, riders, and walkers all at the same time, whether they are crossing their metropolis or trying to organize their lives around a defined area within it.

No wonder there is so much laying down of tracks, and so much support for it.